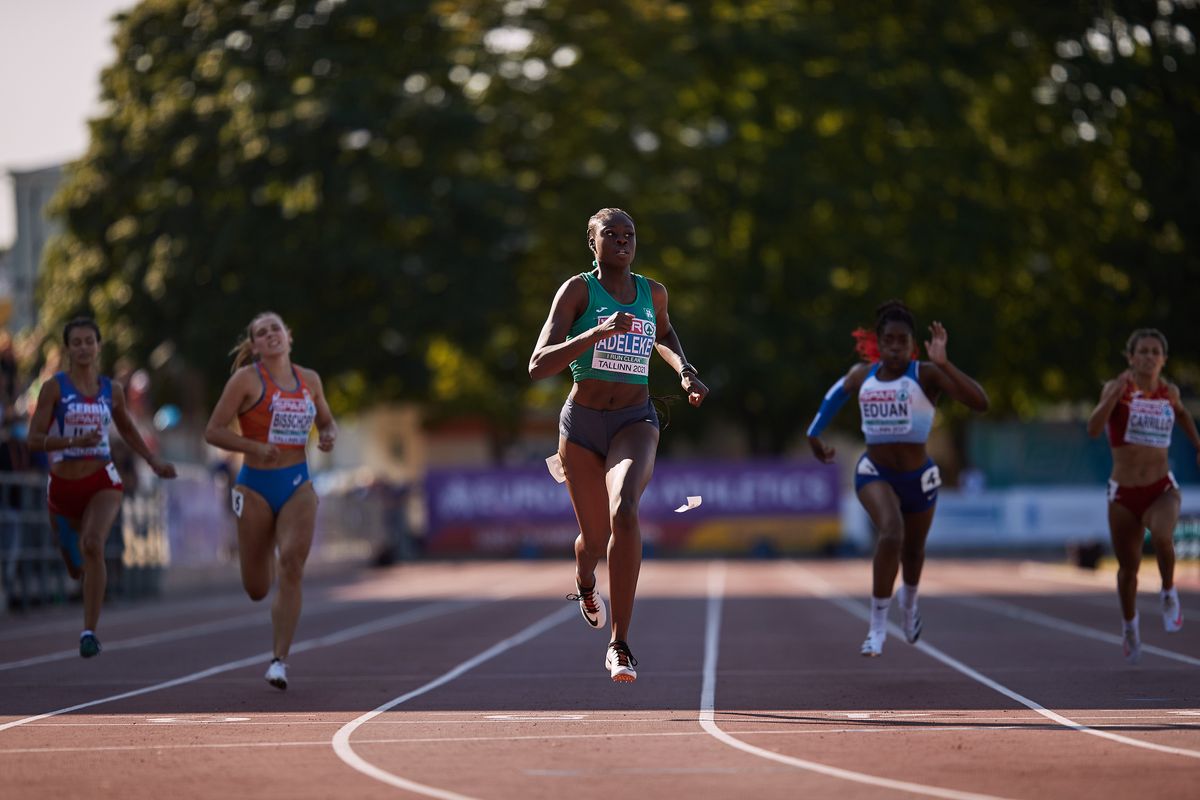 Ireland had only won three titles in European Athletics U20 Championships history prior to Tallinn but the Irish contingent have amassed four gold medals in just over 24 hours in Estonia, including three within a golden three hours on the third day of competition inside the Kadriorg Stadium on Saturday (17).

And with one day of competition remaining, the Irish team currently sit atop the medal table with those four gold medals ahead of Germany, Great Britain and Finland with three titles apiece.

After storming to victory in the 100m, Rhasidat Adeleke was in unassaiable form in the 200m as she became the first sprinter since Jodie Williams on this very same track a decade ago to win a sprint double at the European U20 Championships.

A heavy schedule of six races within three days didn’t seem to unduly affect the Irishwoman whatosever who led off the bend before her strength showed as she forged an awesome half-a-second-plus winning margin on her seven competitors. Her winning time of 22.90 was an outright Irish record and she won by an incredible 0.65 over Dutchwoman Minke Bisschops who toned for missing out on the 100m medals with silver in the 200m in 23.55.

“I am so happy after today; it was all I could ask for. It feels so good to smash that 23 second barrier again, I am very happy about that. I was going pretty strong during the race, I just wanted to stay in line. When I decided to come here, I just told myself that since I am doing double, I need to win them both,” said Adeleke.

On the incredible campaign for the Irish contingent in Tallinn, Adeleke is adament this is the start of something for athletics in Ireland. "Now Ireland is definitely starting to rise so watch out for us in Paris 2024!" she said.

And Adeleke’s championship isn’t necessarily over yet. The Irish team qualified for the women’s 4x400m final this morning and the 18-year-old could potentially be drafted into the team for tomorrow afternoon’s final.

The European U20 100m and 200m champion is no stranger to running in 4x400m on the US collegiate circuit for the University of Texas and she recently posted a scintillating sub-51 split in the NCAA Championships.

“My season is only just starting now, because of school and covid earlier in the year. It really hampered my preparation for these championships. I'm still a bit shocked I managed to pull it off; it makes me really excited about what I can do in the coming weeks,” said the winner.

And a third gold medal for the Irish came in the 3000m as 16-year-old Nicholas Griggs - the youngest competitor in the race by over a year - ran with the poise and tactical knowhow of a seasoned senior. The newcomer on the Irish team loomed on the shoulder of long-time leader Vid Botolin from Slovenia at the bell before pulling away effortlessly from his rivals on the last lap, winning gold in 8:17.18 by more than a second.

Griggs covered the last kilometre in a sharp 2:31.58 and the Irish youngster didn’t seem to be unduly overexerted either as he kicked comfortably away from Germany’s Yassin Mohumed (8:16.36) and Brit Alex Melloy (8:18.49).

“Of course, when I saw the other guys winning, I wanted to show something similar. But in the end, I just did my job and focused on my race. We are a very small country and these results are just exciting,” said Griggs, who is eligible to defend his 3000m title in two years’ time in Cluj-Napoca, Romania.

He added: “I did not feel a big responsibility or any pressure because we are prepared to race like this. Our coaches were yelling all the way down and supporting us. In the last 50-60 metres, I knew I had enough power to win a gold.”