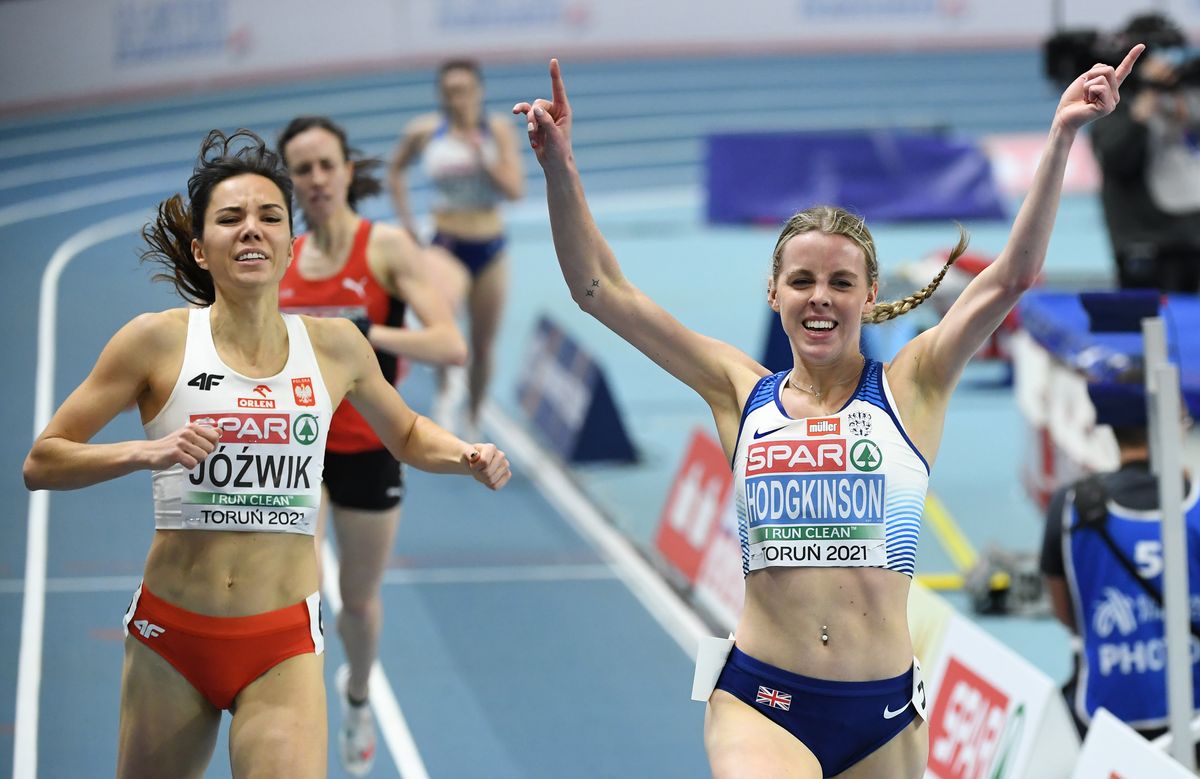 After breakthrough in Torun, Hodgkinson sets sights on Tallinn and Tokyo

Keely Hodgkinson’s assured performance in becoming European indoor 800m champion just four days after her 19th birthday made her the youngest British winner at the championships for more than half a century.

Only Marilyn Neufville, who was 17 when she won the 400m at the 1970 European Athletics Indoor Championships in Vienna in a world best of 53.01, has been a younger British gold medallist.

But in crossing the line in 2:03.88, a last lap of 28.23 taking her comfortably clear of the very experienced Polish duo of Joanna Jozwik and Angelika Cichocka, Hodgkinson also emulated one of the achievements of her mentor, Jenny Meadows.

Meadows, whose husband Trevor Painter coaches Hodgkinson, was European indoor 800m champion exactly ten years earlier in Paris, although unlike her young charge she was robbed of the full glory of that moment. She finished second on the day in 2:00.50 behind Russia’s Yevgeniya Zinurova, who clocked 2:00.10.

A year-and-four-months later, silver turned golden for the Wigan-born athlete as Zinurova’s performance, and that of the Russian who finished behind Meadows, Yuliya Rusanova, was discounted due to doping violations.

It was a richly deserved but sadly delayed moment of triumph for an athlete who had earned world bronze in Berlin two years earlier in her personal best of 1:57.93 and an upgraded European silver medal in Barcelona the year before.

Speaking to the BBC after her race in Berlin, Meadows commented: "It proves you should never say never, you should always believe in yourself. If you work hard and keep the faith, good things will happen.”

That heart and commitment has contributed to the development of Great Britain’s latest middle-distance winner, who earlier this year set a European indoor U20 800m record of 1:59.03.

“I’ve always thought it doesn’t matter how old you are, as long as you’re healthy and doing things right you can be capable of anything,” said Hodgkinson in the wake of her Torun victory. “You’ve just got to believe in yourself and not be intimidated by the older girls.”

In the years to come Painter and Meadows believe Hodgkinson is capable of beating Kelly Holmes’s long-standing British record of 1:56.21. But for the moment this level-headed athlete, born, like her mentor, in Wigan, is focusing on other targets.

“I’m not really looking at those expectations,” said Hodgkinson, who started a criminology with psychology degree at Leeds Beckett University in the autumn. “I’m just going to carry on and try and enjoy it and put myself forward with the senior girls because it’s OK saying: ‘Let’s get to the Olympics.’”

Reaching Tokyo is an utterly realistic target for a young woman who won the British outdoor title last year with a typically tactically astute display. She has a current outdoor best of 2:01.73 although that mark looks hugely likely to be reduced sooner rather than later.

Meadows confirms that the current intention is for Hodgkinson to seek to add a European U20 gold to the bronze she currently has by taking part in this year’s edition in Tallinn, Estonia from 15-18 July – as a possible precursor for her Olympic debut in the Japanese capital.

“We sat down at the end of last season to plan for the 2021 year and it was always the plan to peak in August, whether that be the Olympic Games or the World Junior Championships,” Meadows told European Athletics.

“The European U20 Championships was on the plan as a championship to win and would therefore be a good stepping stone along the way.

“She has golds from the European U18 Championships and now European Indoors so Keely is keen to add the European U20 title too. We will see how the season progresses before we commit to finalising our targets.”

Hodgkinson remarked in Torun how Painter and Meadows were happy for her to take responsibility for her own performances and to become “her own athlete.”

Meadows confirms this approach: “We had total confidence in Keely’s ability to handle the championships both from a physical and mental point of view.

“Despite the pandemic, we had managed to fit in most aspects of training during the winter period through being quite innovative and adaptable. Luckily we have a lot of experience of being adaptable and we make sure we explain things to Keely regarding objectives of sessions and future direction so that she ‘buys in’ to the plan and can be confident knowing the process she is going through.

“We knew therefore that all the training she needed had been completed going into Torun and she had all the tools she needed.”

And these tools, plus some guidance from one of the greatest British 800m runners in history, could take her a very long way in the sport.