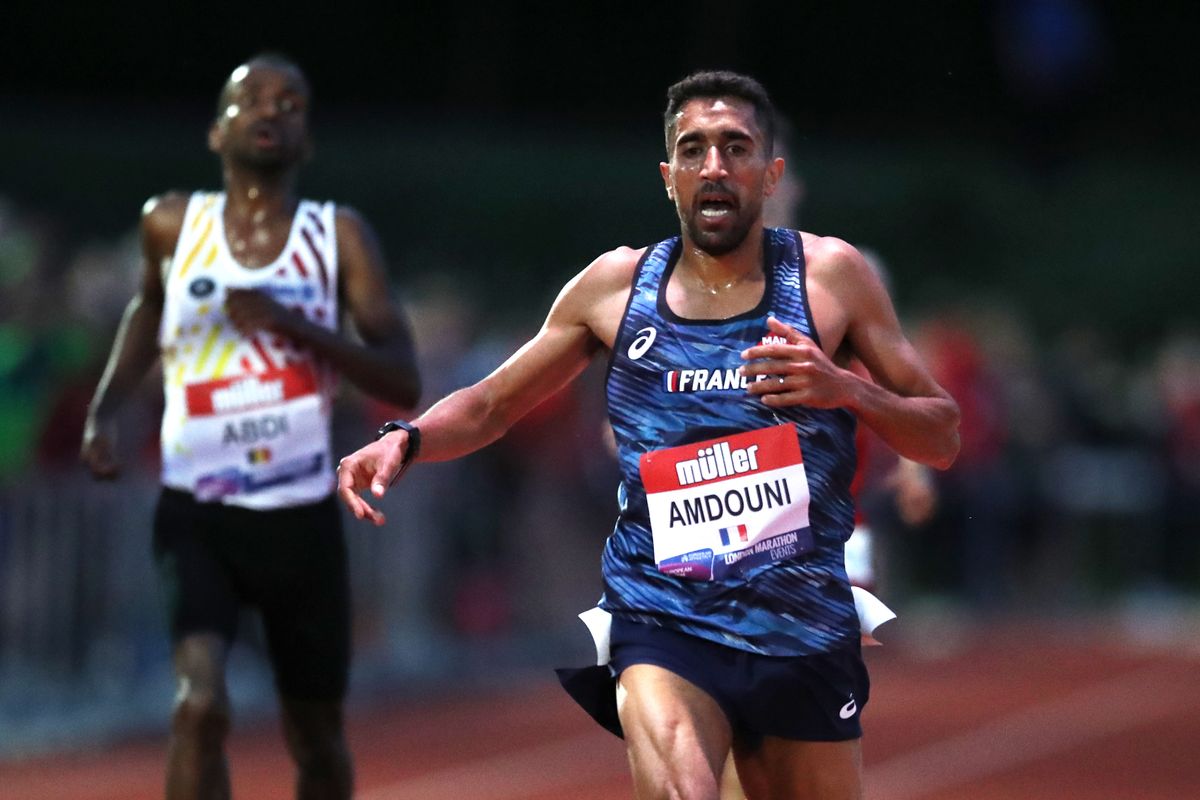 Amdouni sprints to victory at the European 10,000m Cup in Birmingham

In a repeat of the Berlin 2018 European Athletics Championships, France’s Morhad Amdouni found another gear on the last lap to outsprint Bashir Abdi from Belgium for the individual title and lead France to the team trophy at the European 10,000m Cup in Birmingham on Saturday (5) evening.

The top three finishers all secured the Olympic qualifying standard of 27:28 but the anticipated domestic head-to-head between European leader Marc Scott and four-time Olympic champion Mo Farah didn’t quite materialise at the University of Birmingham Athletics Track.

Both Scott and Farah fell away from the leaders after the halfway point, although Scott did rally in the latter stages to pip his more illustrious compatriot for the domestic stakes in seventh in 27:49.94 to Farah’s 27:50.64 in eighth, his first defeat at this distance since the 2011 World Athletics Championships.

Scott already has the Olympic qualifying standard by virtue of an early season European leading time of 27:10.41 and is now assured of his place on the British team for Tokyo although Farah, who has been waylaid by a recent ankle injury, will have to attempt the distance again in order to defend his 10,000m title in the Japanese capital.

“The last 10 days hasn’t been great but, no matter what I’ve achieved in my career, it was important that I come to the trials. It would have been easy not to show but I did show and I dug in deep. With 15 laps to go I was hurting hard. I just had to keep fighting, keep digging in and finish in the top two,” said Farah after the race.

At the front end of the race, Amdouni showed the most enterprise and resolutely stuck to the wavelights - an initiative which was used for the first time at the 2019 European 10,000m Cup in London - which were set at just a fraction inside the Olympic 10,000m qualifying time of 27:28.

The European 10,000m champion was working visibly hard in chase of the standard and the grimacing Frenchman was closed down in the latter stages by a tandem of Abdi and Carlos Mayo from Spain who formed a group of three with Amdouni with one kilometre remaining.

Having relinquished the lead, Amdouni dug in at the back of the leading trio as Mayo forged ahead in pursuit of victory as well as the Olympic qualifying standard with Abdi in his slipstream. This is how the positions remained as they hit the bell.

Two laps after looking in danger of being dropped, a revived Amdouni found extra resolve and moved wide with 200 metres remaining and uncorked a devastating sprint finish. The European 10,000m champion passed Mayo first before overhauling Abdi halfway down the home straight for victory in a lifetime best of 27:23.39.

Abdi and Mayo also secured lifetime bests and Olympic qualifying times of 27:24.41 and 27:25.00 respectively although the Belgian is expected to focus on the marathon at the Tokyo Olympics. Abdi is the second fastest European in history at the distance by virtue of a 2:04:49 performance in the 2020 Tokyo Marathon.

With Yann Schrub (27:49.64) and Mehdi Frere (28:03.90) fifth and eleventh respectively, France sealed their first team title in the men’s race since 2010 when the event was held at home in Marseille. Hosts Great Britain, whose third counter Emile Cairess was rewarded with a lifetime best of 27:53.19 in tenth, won silver in the team stakes with bronze heading in the direction of Spain.