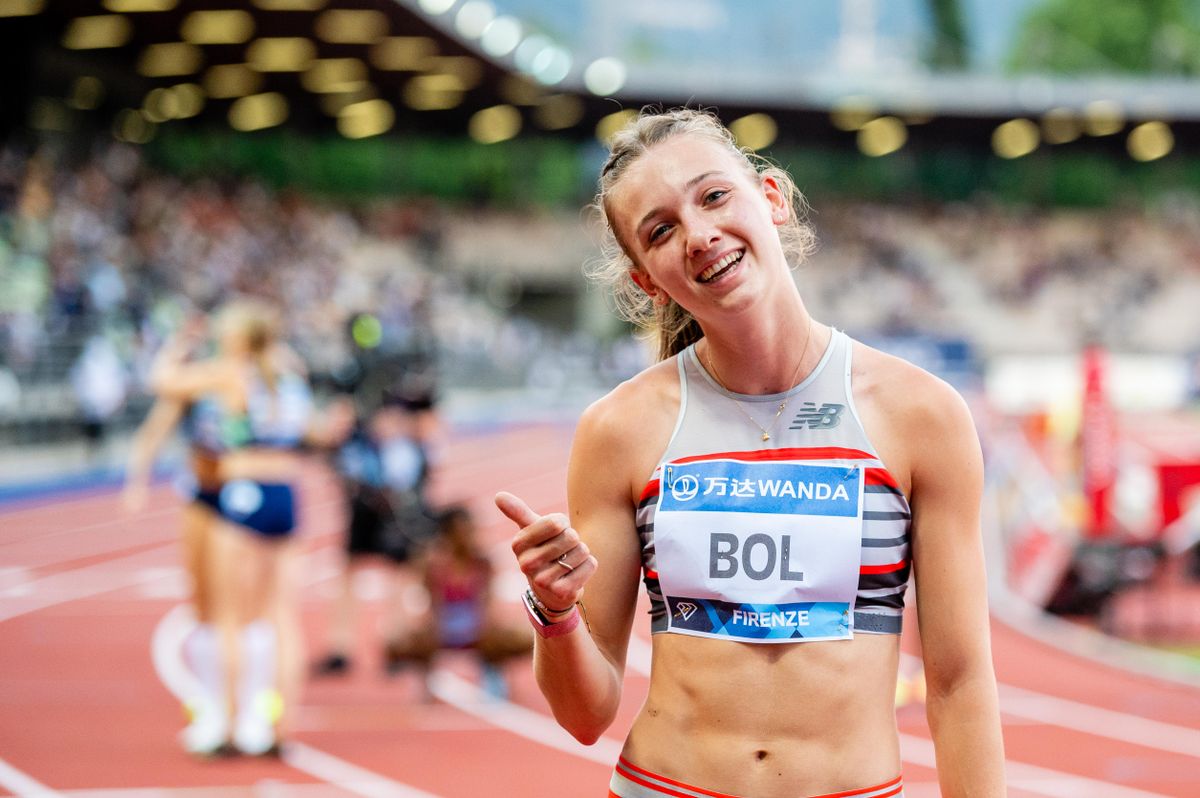 On the same evening Jakob Ingebrigtsen broke the European 5000m record, European indoor champion Femke Bol also demonstrated she is one of the world’s most exciting young talents with a 53.44 victory that smashed a 37-year-old European U23 400m hurdles record in the Diamond League in Florence on Thursday (10).

The 21-year-old Dutch record-holder, who won 400m and 4x400m relay titles in Torun, beat the 53.58 clocking set by Margarita Ponomaryova from the Soviet Union in 1984 at the Golden Gala meeting.

Bol didn’t get a perfect start but attacked hard through the opening 200 metres at the Stadio Luigi Ridolfi, chasing European silver medallist Anna Ryzhykova on her outside down the back straight.

The tall youngster began to edge proceedings with three flights to go, and stretched her lead out down the home straight to eclipse her best time of 53.79 set in Arnhem last year. Across all events including relays, Bol has set nine Dutch records this season and looks poised to go faster in both the 400m and 400m hurdles.

Ryzhykova was Bol’s closest challenger and finished second in 54.19. The Ukranian broke her personal best for the first time in almost a decade, ameliorating her previous mark of 54.35 which she set when winning bronze at the 2012 European Athletics Championships in Helsinki.

Speaking afterwards, Bol indicated that she could have gone even faster. “I made some mistakes, but then the second half of the race was much better. I gained a lot of speed on the flat, but I have to find my rhythm over the hurdles,” she said.

Bol confirmed that she is looking to focus on the latter event at the Tokyo 2020 Olympic Games although she will be reverting back to the 400m flat at next weekend’s European Athletics Team Championships First League in Cluj-Napoca, Romania.

More Dutch joy came later in the evening as European record-holder Sifan Hassan set a world leading time of 3:53.63 in the women’s 1500m, which left even her “surprised”.

Hassan came into the race after an extraordinary week in which she broke the world 10,000m record in Hengelo on Sunday, only for it to be bettered two days later by Ethiopia’s Letesenbet Gidey in the same city.

The 28-year-old was well-positioned on the shoulder of the Olympic champion Faith Kipyegon at the bell, with European champion Laura Muir breathing down her neck. Trying to outmuscle the Kenyan down the home straight, she had to wait until the last 30 metres to finally be sure of victory, showing no sign of fatigue in her legs.

After the run, which was also a meeting record, Hassan admitted that she didn’t expect to go so fast as she has been preparing for longer distances with an eye on a prospective 5000/10,000m double in Tokyo. “I did not prepare for speed, I trained more for the 10K. I am surprised about the time,” said Hassan, who won the European 5000m title in Berlin 2018.

That was the event where Dina Asher Smith cemented her status as one of Europe’s top athletes, and the British record-holder again looked strong in a commanding 22.06 win, the fastest time in Europe this year as well as a meeting record.

2017 world silver medallist Marie-Josee Ta Lou was marginally ahead as they came off the bend, but Asher-Smith stamped her authority in the final phase of the race as the Ivorian began to tire. World bronze medallist Mujinga Kambundji is now the second fastest woman in Europe in 2021 after she also finished well to come home third in 22.60 behind Ta Lou's 22.58.

Another European leading mark was set in the women’s pole vault as reigning world champion Anzhelika Sidorova reigned supreme in getting over 4.91m, her best clearance outdoors since her 4.95 best set when winning Doha 2019.

Her nearest competition on the night came from European indoor bronze medallist Iryna Zhuk and Olympic champion Katerina Stefanidi, who both had solid starts, but struggled with the bar at 4.76m and finished second and third respectively.

Another win for a neutral athlete came in the men’s high jump, but it was a closer battle. In the end, world and European bronze medallist Ilya Ivanyuk’s five first-time clearances were key to victory, with three men tied on 2.33m.

Australia’s Brandon Starc and Italy’s Gianmarco Tamberi were second and third, although the home favourite, who made a belated start to the outdoor season after a foot injury on the eve of the European Athletics Team Championships, gave the crowd plenty to cheer with a close final-attempt clearance at that height.

After finishing third in the last Diamond League event in Doha, five-time European champion Sandra Perkovic returned to winning ways with a season’s best throw of 68.31m in the discus. That came in the second round, and in line with the new field event format being trialled at Diamond League events this year, she also threw 66.90 in the winner-takes-all final round in order to guarantee first place.

It was a different story in the women’s long jump as an all-European top three took centre stage. Olympic bronze medallist Ivana Spanovic was third with 6.74m behind Ukraine's Maryna Bekh-Romanchuk (6.79m) and world and European champion Malaika Mihambo’s (6.82m) after five goes each.

Spanovic hit the board well to put up a result of 6.56m and what didn’t seem like too much pressure on her opponents. However, when European silver medallist Bekh-Romanchuk got a red flag, and Berlin 2018 winner Mihambo struggled for height, it was the Serbian who came away with the spoils.