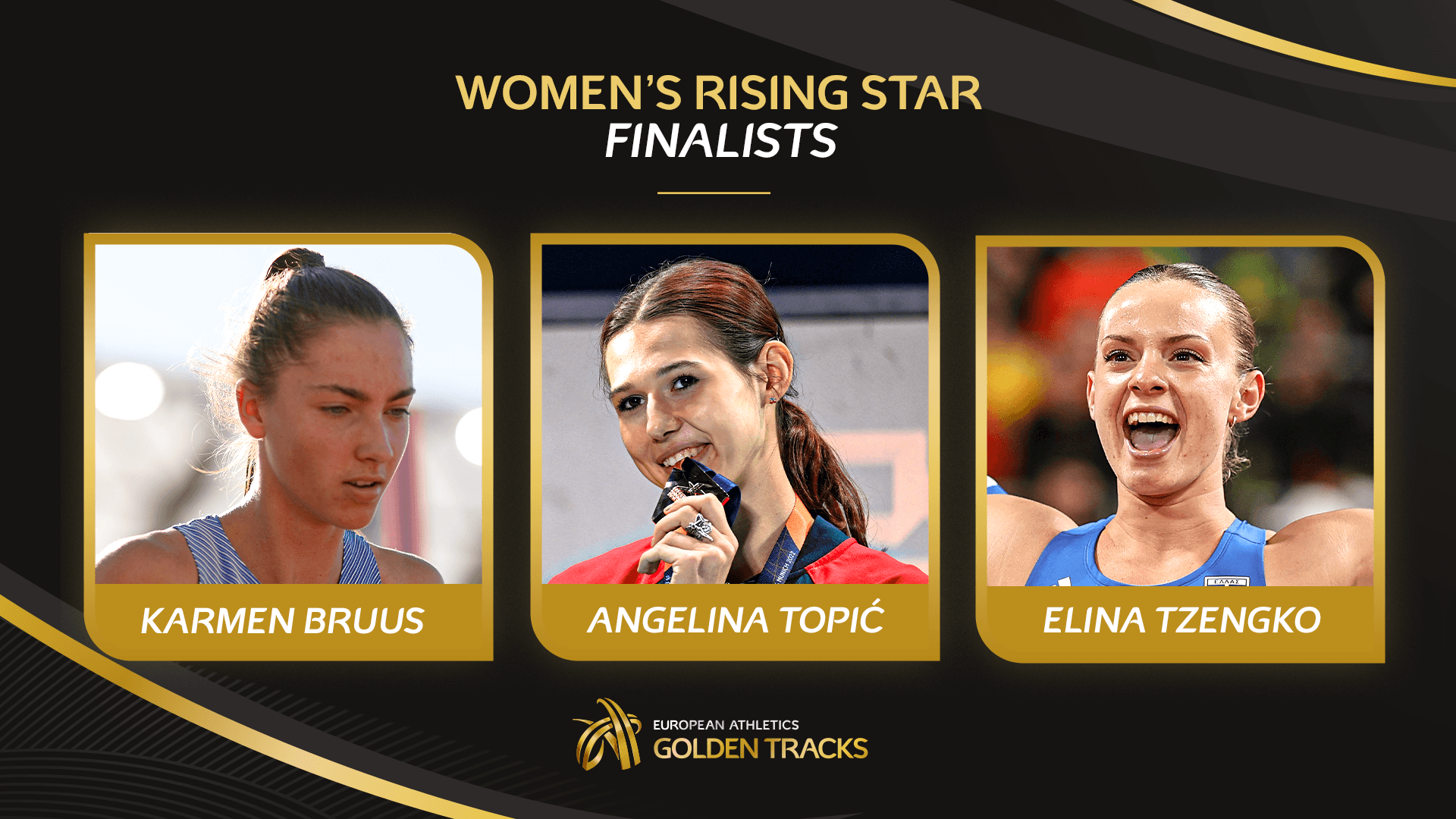 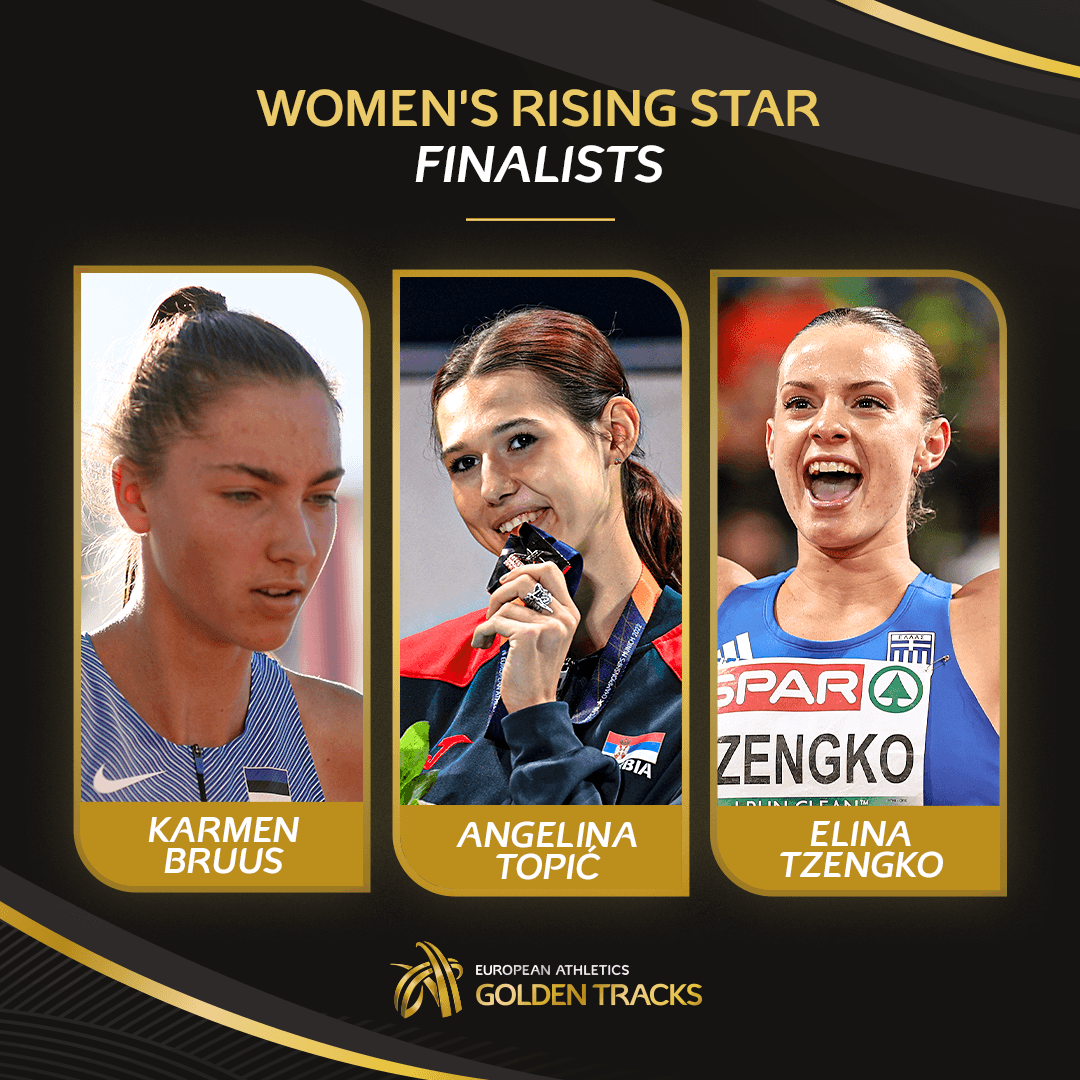 We can reveal the three women's finalists for the 2022 Rising Star award, a category which was introduced in 2007 to recognise outstanding young European athletes.

The winner will be announced and presented with their trophy on-stage at the annual Golden Tracks award ceremony in Tallinn, Estonia on 22 October. The ceremony will be streamed live through the European Athletics website and YouTube channel.

Bruus had cleared 1.91m during the indoor season but she struggled to find anything resembling this form in Jerusalem, needing three attempts at her opening height in qualifying before bowing out at a modest 1.79m in the final. But a transformed athlete appeared on the biggest stage in Oregon, clearing a lifetime best of 1.93m in qualifying before equalling the world U18 best of 1.96m in the final. 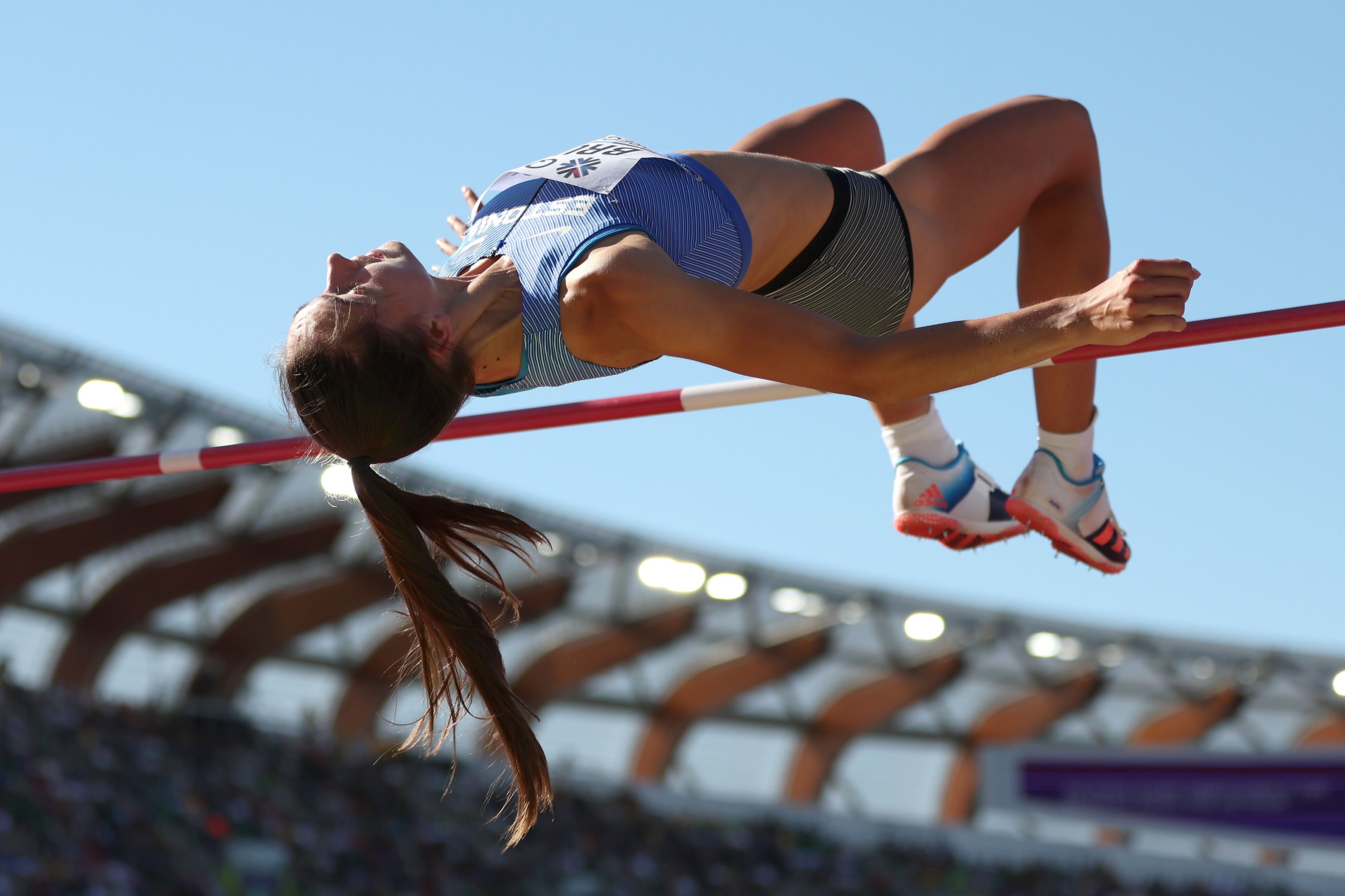 From senior success in Oregon, Bruus landed U20 gold at the World Athletics U20 Championships in Cali, Colombia where she defeated a field which included fellow nominee Angelina Topic from Serbia before rounding off her season with her debut appearance at the European Athletics Championships in Munich.

Only 17, Karmen Bruus is already the joint Estonian record-holder in the high jump. Her 1.96m clearance at the World Athletics Championships was not only an equal world U18 best but also equalled the Estonian record held by Anna Iljustsenko.

Angelina Topic’s year started with an appearance on home soil at the World Athletics Indoor Championships in Belgrade and climaxed with a spree of three major medals in the space of six weeks this summer.

Having equalled the world U18 best with 1.96m, Topic was one of the highest profile athletes competing at the European Athletics U18 Championships in Jerusalem not only due to her own accomplishments but also the fact Topic hails from Serbian athletics royalty.

Under the supportive gaze of her father Dragutin, the 1990 European champion, and mother Biljana, the 2009 world bronze medallist in the triple jump, Topic shouldered the pressure and growing expectations by clearing 1.92m to win the title before attempting an outright world U18 best of 1.97m. 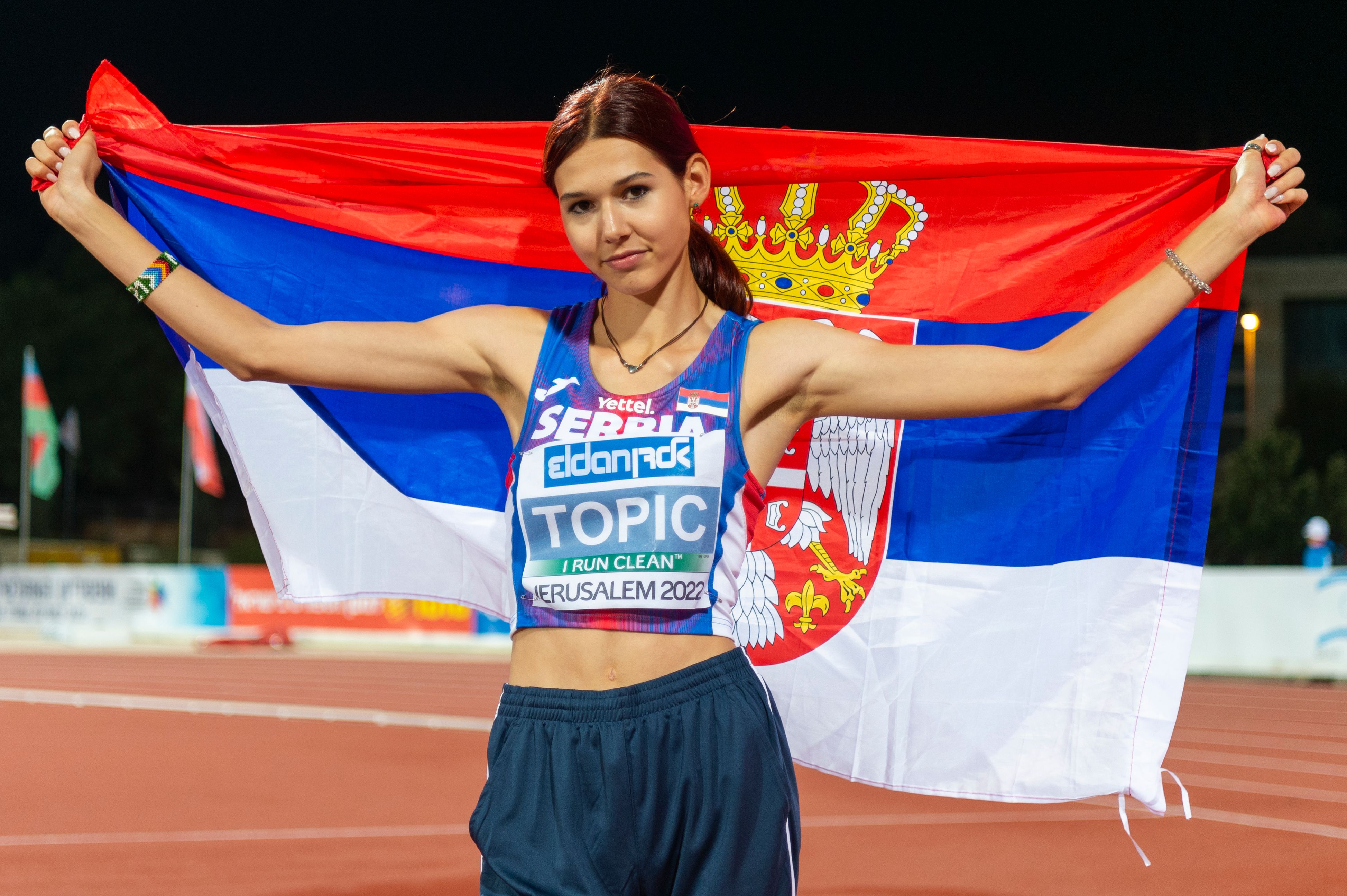 Topic went on to win world U20 bronze in Cali before making her breakthrough in the senior ranks with an unexpected bronze medal on the last night of the Munich 2022 European Athletics Championships, clearing 1.93m again in cool and wet conditions in the Olympic Stadium.

In total, Topic cleared 1.90m or higher in 10 competitions indoors and outdoors this season.

At 17, Topic was the youngest medallist across all disciplines at the European Athletics Championships in Munich.

On her goals for the future: "I would like to make history in high jump and become one of the greatest ever. My dream is to set world records in each age category and to finalise it by winning a gold medal at the Olympics."

It only took Elina Tzengko one season to graduate from European U20 champion to European senior champion in the javelin. 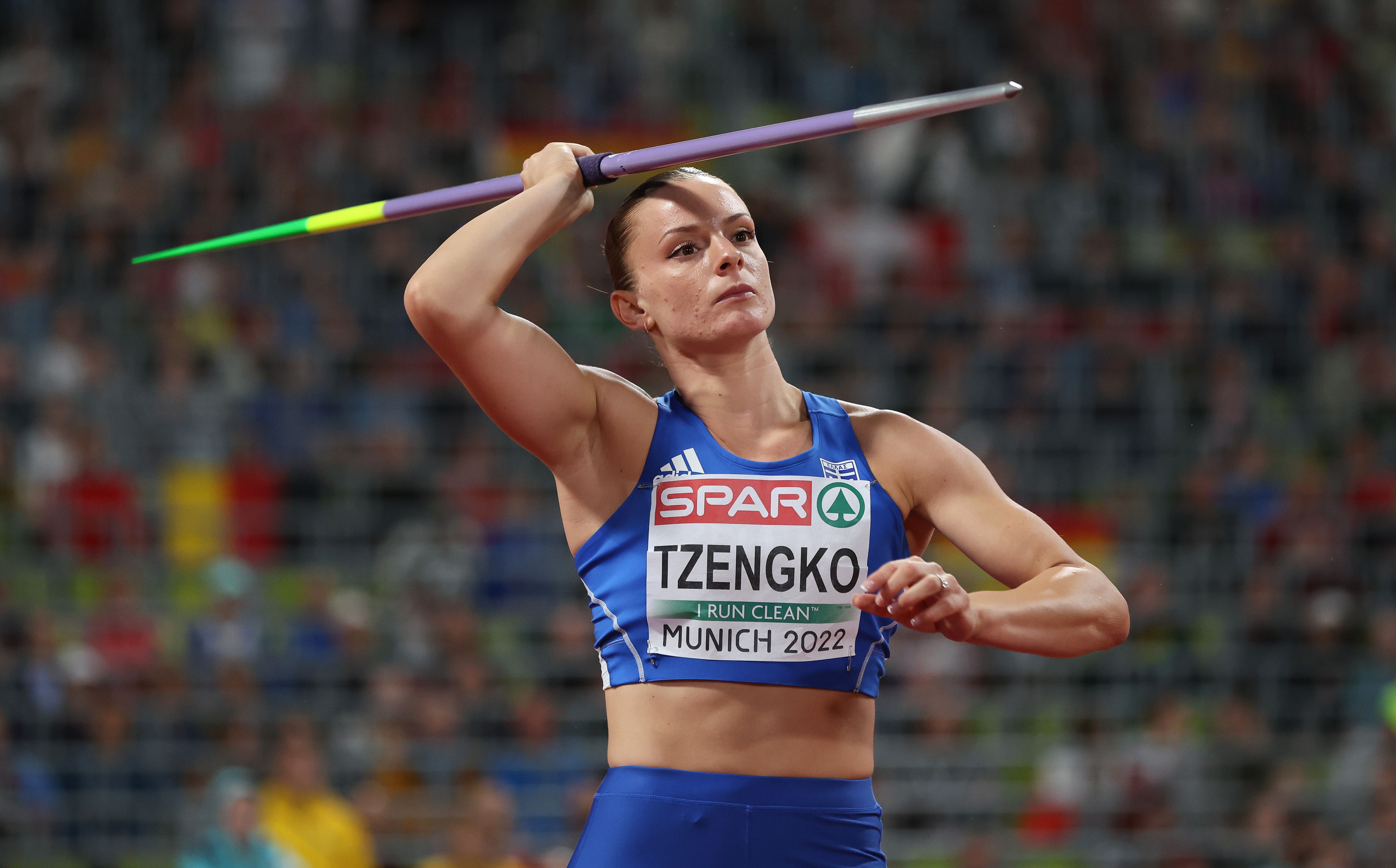 Tzengko broke the 60 metre-line in eight competitions in 2022 and surpassed the 65 metre-barrier twice. As well as throwing 65.81m to win European gold, Tzengko threw 65.40m for victory in Ostrava.

Tzengko balances her athletics career with her studies. She is studying sport science at the University of Thessaloniki.

On challenging the 70 metre-barrier: ​“I want to attack 70 metres for sure, but at the moment, 65 metres is perfect for me now. I am only 19 years old. I still have a lot of years to come.”