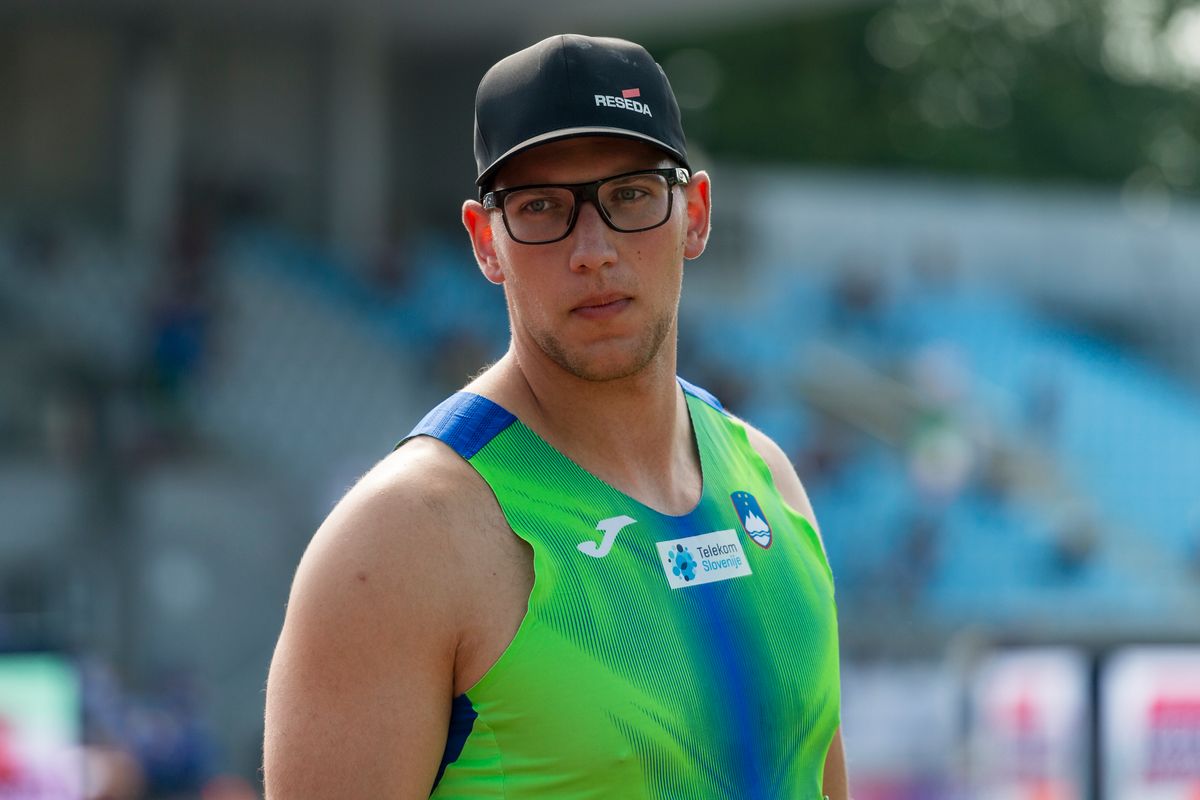 After a no-throw on his first attempt, Slovenia’s Kristjan Ceh made no such mistake with his second throw in discus qualifying on the second session of the first day of the Tallinn 2021 European Athletics U23 Championships.

Sporting his trademark glasses and baseball cap, Ceh launched the discus not only in excess of the automatic qualifying line of 59.00m but also further than Robert Harting’s long-standing championship record of 64.50m with 65.59m.

“I am always a bit nervous before each competition. It is stressful. I was in a bit of a hurry and the first attempt did not go technically well. I had to get relaxed before the second throw and it went well. I feel 100 percent ready,” said Ceh.

Other automatic qualifiers were Belarus’ Yauheni Bahutski (62.77m) and reigning European U18 and U20 champion Yasiel Brayan Sotero from Spain (59.86m) while Martynas Alekna from Lithuania qualified on distance with 57.16m.

Martynas is the son of the legendary discus thrower Virgilijus and his younger brother Mykolas is the big favourite for the gold medal at the European Athletics U20 Championships in Tallinn which begin next Thursday.

Poland’s Adrianna Sulek amassed a brilliant first day in the heptathlon and she is on course to challenge the championship record of 6396 points held by Latvia’s Aiga Grabuste.

Those efforts take her overall score up to 3838 points ahead of Great Britain’s Holly Mills who atoned for an underpar high jump with 13.62m in the shot and then 24.06 in the 200m to bring her tally up to 3688 points.

Gold medals for Menacho and Karpuk on day one in Tallinn

Eduardo Menacho was only ranked eighth on paper based on lifetime bests for the men’s 10,000m final but the Spaniard overturned the formbook to win the gold medal with an unmatched last kilometre of 2:41.27.

Menacho caught the long-time leader and arguable pre-competition favourite Pierre Bordeau from France - whose lifetime best was almost one minute faster at 28:36.32 to 29:20.82 - with three laps to go to win by a clear margin in 29:14.92.

“I’m still in disbelief; this is all I ever wanted from the start of the season,” said the emotional Spaniard who celebrated with his teammates who lined the circumference of the Kadriorg Stadium.

He added: “Some people told me it was a crazy thought, that it wouldn’t be possible but I think I managed to do it as a result of really hard work throughout the year. Little by little I was showing signs of some progress which really paid off here today.”

While Bordeau was swallowed up by the pack and eventually drifted back to finish eighth in 29:38.39, the French still came away with a brace of medals. Florian Le Pallec and Valentin Gondouin broke away from the chasers to win silver and bronze respectively in 29:23.82 and 29:24.40.

In the first field event final of the programme, Belarus’ Dzmitry Karpuk dominated the men’s shot put final. He was the only thrower to surpass the 20 metre-line, a feat he achieved with four of his six throws.

His winning effort came in the first round with 20.33m although he wasn’t completely satisfied with his performance. “My feelings are mixed because I really wanted to achieve a personal best. But on the other hand, I won and this is my first big European medal. The result should have been better but this is life,” he said philosophically.

In the triple jump, European U20 triple jump champion Spiridoula Karidi led the two pools of qualifying. The ebullient Greek bounded out to 14.04m on her second attempt to record the only 14 metre-plus jump of the competition.

Fellow European U20 champion Simon Ehammer also impressed in the long jump qualifying with a season’s best of 7.95m but the Swiss decathlete was narrowly eclipsed by Spain’s Jaime Guerra who led the two pools with 7.96m.

On the track, Great Britain’s Jeremiah Azu qualified fastest for the men’s 100m final with a lifetime best of 10.19 while Belgium’s Rani Rosius was propelled to a 11.16 clocking in the women’s 100m final thanks in part to a 3.0 m/s tailwind.