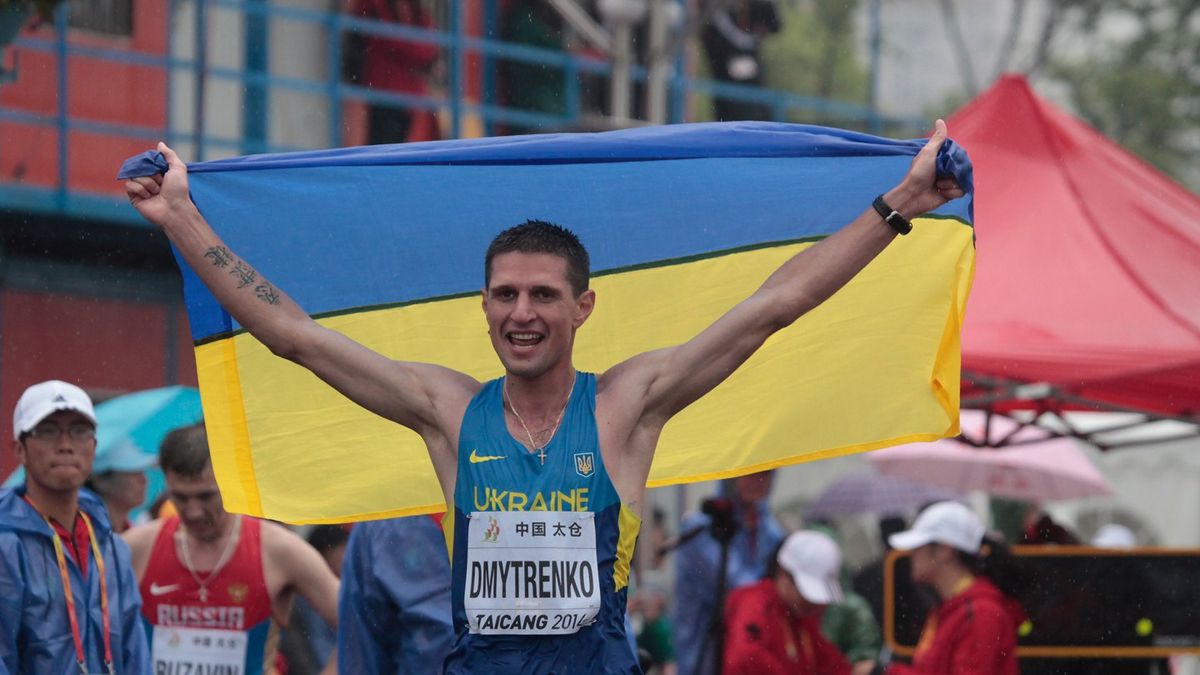 Before the start of the men's 20km at the IAAF World Race Walking Cup in Taicang on Sunday morning, two names dominated the conversation: that of the Olympic champion Chen Ding, from the host nation China, and Russia's Aleksandr Ivanov, who won gold at the World Championships in Moscow last summer.

Would it be a clash between the two and which of the two champions would triumph? The answer: neither.

With the best performance of his career, European athletics has a new race walking star after Ukrainian Ruslan Dmytrenko won in style on a glorious day for his country that also lifted the team title.

Dmytrenko's success led Ukraine to the team prize with 18 points from China with 23 and Japan with 35.

He said: 'Yes, indeed it was a huge surprise and I didn't think the Chinese walker (Cai) would be so good.

'I don't think for the first half that I needed to do my best, I just needed to follow my pattern. But for the latter half, I did my best and got the win.'

Seventh in Moscow last year has been turned into this tremendous success for Dmytrenko, whose rise to the top comes just three months before the European Athletics Championships in Zurich.

There was nothing to choose between 14 walkers after 5km with Ivanov at the helm, that lead group being cut back to 10 at the halfway stage and then at the 15km split, Ruzavin was in front by just a second in 59:44.

But with two kilometres to go, Ivanov, who had been in fourth at 15km with Dmytrenko just behind him, was disqualified when he was shown a third card.

By then Cai had moved in front with Dmytrenko chasing but by the bell, the Ukrainian had moved ahead with a time of 1:11:04, a lead of 20 metres over the Chinese walker.

He was not going to be caught and while Cai had the noise of the home crowd backing him on, Dmytrenko was in command and he was smiling and poking out his tongue as the finishing line drew nearer.

Spain's Miguel Angel Lopez was the next European in fifth in a personal best time of 1:19:21 with Dmytrenko's teammate Igor Glavan in seventh in 1:19:59, also a personal best and fellow Ukrainian Nazar Kovalenko in 10th in 1:20:11.

Ireland's 50km world champion Robert Heffernan, who is preparing for the longer event in Zurich, was 23rd in 1:21:00.

Earlier in the day in the women's junior 10km race, there was a fine performance from Anezka Drahotova, 18, of the Czech Republic, as she won bronze in a national junior record of 43:40 in a race where China landed a one-two with Dandan Duan first in 43:05 and Jiayu Yang second in 43:37.

Drahotova and Russian Oxana Golyatkina had led at the halfway point in 21:45 with the Chinese pair back in third and fourth.

Duan joined the two Europeans but then Golyatkina was disqualified and by the 8km mark, the Chinese athlete had taken the lead before Yang made her move for second.

With Laura Garcia-Caro in fourth in 45:29 and Maria Perez ninth in 46:41 - both personal best times - they helped Spain to silver in the team event with 13 points as China won with 3 from Australia in third with 20.