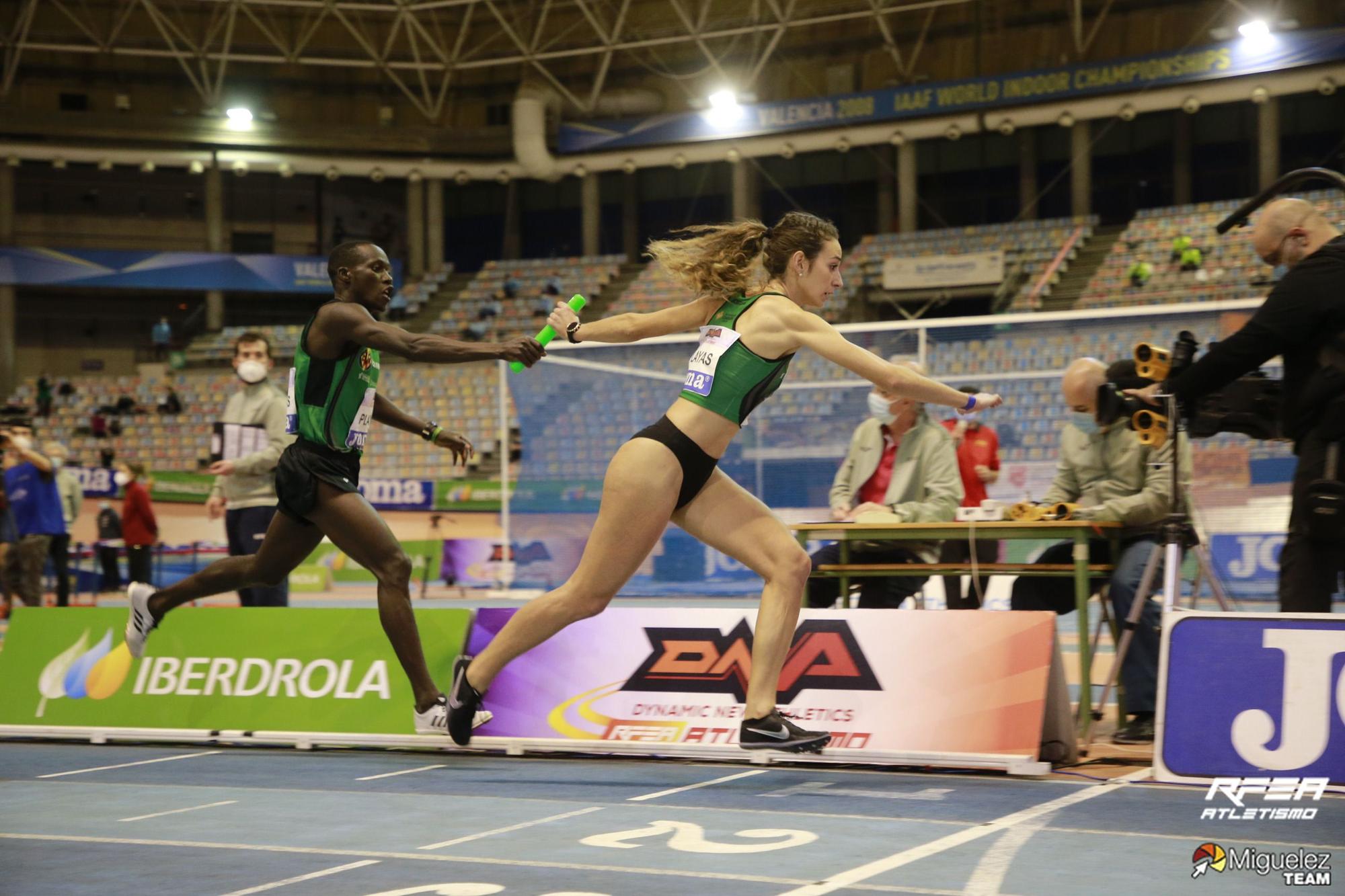 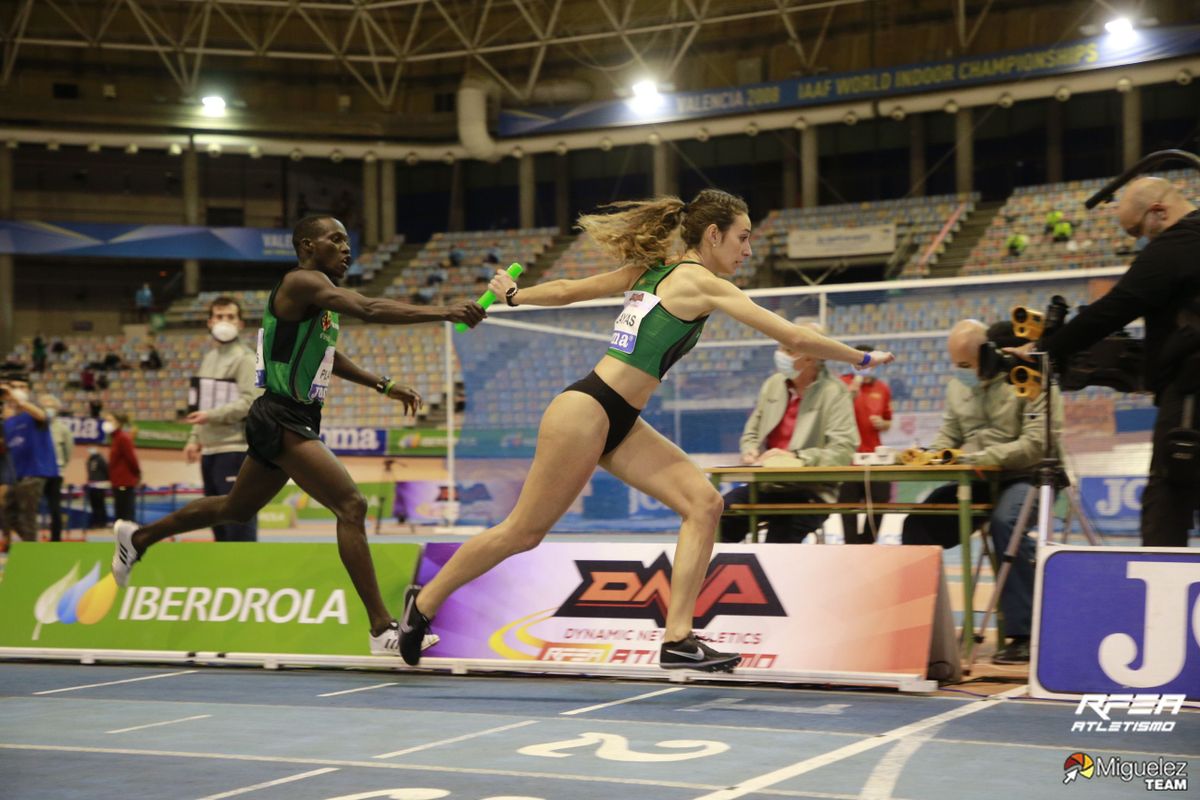 Despite an enforced absence from the competition calendar during 2020 due to the coronavirus pandemic, Dynamic New Athletics returned to the spotlight in Spain on Saturday (30).

The national indoor inter-clubs meeting in Valencia was the first time the DNA had taken place undercover, with the Spanish athletics federation demonstrating the flexibility of the format by adapting the timetable to embrace the principal concepts of DNA.

The Playas de Castellón club – one of Spain’s leading clubs in recent years – ran out winners in the senior contest and clinched their victory in the Luis Puig Velodrome – the venue for the 1998 European Athletics Championships and the World Athletics Indoor Championships a decade later – after a dominating performance in the final event, The Hunt.

After going into The Hunt, a mixed medley relay, with a lead of just four points – which translated into an advantage of 1.33 seconds – Playas finished more than three seconds ahead of their nearest rivals, thanks in no small part to a devasting four laps of the track by their locally-based Burundi international Eric Nzikwinkunda.

“Wow, what an exciting new format. I had lots of fun. I think we all did. The new rules, especially in the field events, are a great innovation,” commented the Playas captain Carmen Ramos, the Spanish international heptathlete giving DNA her team’s seal of approval after receiving a winner’s cheque for €1500.

Both the senior and U18 competitions saw a mix of events that combined three traditional track races – men’s 60m, women’s 400m and 60m hurdles in the senior competition – with three field events held under special DNA head-to-head rules which first saw the light of day at the 2019 European Games in Minsk: the men’s long jump and shot put, and women’s high jump.

The six events delivered points for positions and, in turn, this total and the difference between the six participating teams was transformed into a time advantage for The Hunt, which in Valencia was a women’s 1000m followed by a men’s 800m, women’s 600m and finally a men’s 400m.

Given the prevailing situation with Covid in Spain, the Valencia competition was held under the strictest sanitary conditions, sadly without any spectators and with all athletes and other personal taking quick Covid antigen tests before being allowed the enter the main part of the stadium.

The use of masks was mandatory throughout the day except when competing and there were extended protocols for cleaning, disinfection and hygiene with the competition equipment and the arena as a whole.

Nevertheless, the competition was a resounding success and showed that DNA can be adapted to all environments, and surmount even the challenges of the current pandemic.

“I saw how the competition worked in Minsk and I was very enthusiastic about bringing it to Spain and could see the possibilities of how it could work indoors. Even in this situation, we had an exciting competition and I can’t wait for us to stage DNA competitions when we can have spectators int he stadium and watch the energy levels rise,” commented the Spanish athletics federation President and European Athletics Council member Raul Chapado.

Earlier on Saturday, Alcampo Scorpio 71 from Zaragoza won a mixed U20/U18/U16 competition using the same format. Starting The Hunt just five points in front of Playas – 1.66 seconds – the Scopio 71 medley relay quartet never gave their opponents a chance of reeling them in and ran out winners by more than six seconds.

This competition showed off the talents of some of Spain’s top teenagers, several of whom can look forward to competing at the European Athletics U18 and U20 Championships this summer, but a special mention should be made of one athlete who might have to wait a few years before competing on the international stage, 13-year-old Anastasia Lopez who sped to a 60m win in a personal best 7.83 and beat sprinters up to two years older than herself.