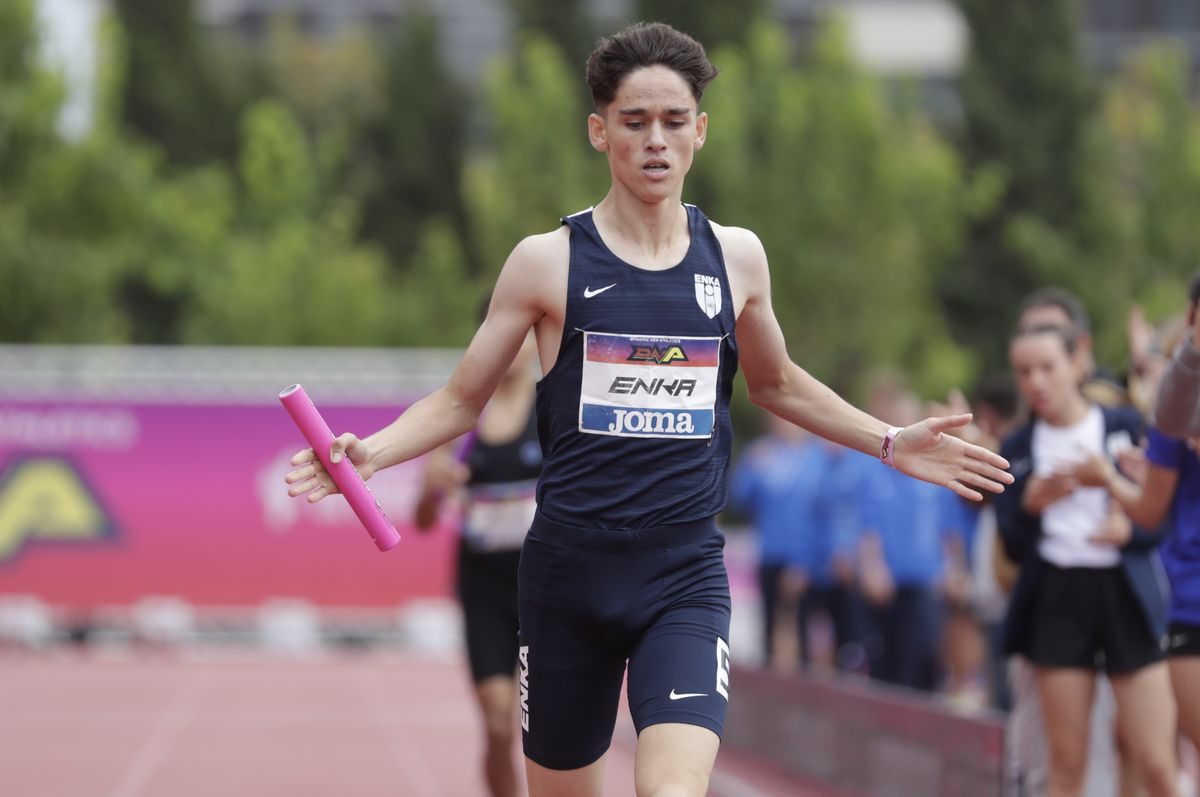 Dominant Enka are crowned DNA U20 champions in Castellon

After Saturday’s sunshine, rain and cloud arrived in the Spanish coastal city of Castellón on Sunday (18) – but the concept of Dynamic New Athletics continued to shine brightly as the inaugural European DNA U20 Clubs competition concluded.

The innovative variant of the sport created by European Athletics - which here involved two-and-a-half hour matches involving six teams at a time and one event at a time – ended in victory for Turkey’s Enka Sports Club ahead of Britain’s Blackheath & Bromley and AK Skoda from the Czech Republic.

Earlier at this ‘Clash of the Clubs’ fixture in the Complejo Deportivo Gaetà Huguet Avenida de Ribesalbes there was a popular result in the ‘B’ final, where host club Playas de Castellón beat Team Lazio to the top place.

With the relative scores of the teams converted into starting-time differentials – every three points translated to an advantage earning a second – the points calculations dropped away like a spent rocket section. It was all about who crossed the line first.

Enka had earned the right to set off 5.9 before AK Skoda, and 11.2 before Blackheath & Bromley.

The latter team moved through to second place thanks to their outstanding talent Samuel Reardon, who finished only a few weary steps behind Enka’s Bahri Drogu, with AK Skoda, who had earned their place in the ‘A’ final on appeal after initially being disqualified for a false start in the previous day’s opening qualifier, taking third place.

Blackheath & Bromley, winners of the previous day’s first qualifying match, had been the only team to run a female athlete on the opening leg of the opening mixed 4x400m relay.

But while Michael Uzozie motored on leg two to put them back in contention, handing over a close fourth, they could not improve on that placing as AK Skoda earned the first 12-point win ahead of Enka.

Victory for the British team’s Jodie Self in a closely contested 100m hurdles, the second event to finish, saw them draw level at the top, but thereafter the Turkish team moved inexorably into a lead they would not relinquish.

Enka’s Mustafa Kuru claimed 12 points in the men’s shot put after surpassing the final effort of 16.54m from AK Skoda’s Tomas Prochazka with a throw of 16.63m.

After Ayetullah Demir’s win in the 110m hurdles, the fourth event, Enka led with 44 points from AK Skoda on 40 and Blackheath & Bromley on 32.

The Czech team remained in contention with their Turkish rivals as victory in the women’s long jump by Katerina Cermakova – whose 5.65m off a wet runway beat the subsequent effort by Danish athlete Betty Jensen of Sparta by one centimetre – saw them close the gap to six points after six events.

There followed a significant blow for Blackheath & Bromley as Luke Dronfield, who had earlier set a personal best in finishing third in his second event of the 110m hurdles, was disqualified for a false start in the 400m hurdles

Victory for Emirhan Ciftci in 53.39 saw Enka improve their lead as they reached 76 points, with AK Skoda on 64 and Blackheath remaining on 48 points.

Blackheath were banking on 12 points in the women’s 100m from their European U18 200m champion Faith Akinbileje, who had reduced her personal best from 11.77 to 11.53 in winning the day before, thus bettering the club’s U17 record of 11.54 set by two-time European 200m champion Dina Asher-Smith.

Despite the damp conditions underfoot as well as a significant headwind, Akinbileje did not disappoint, winning in 11.82 from Enka’s Simay Ozciftci on 12.22 and AK Skoda’s Viktorie Janska on 12.27.

Those conditions were creating particular difficulties for the field event athletes, but the men’s high jump offered further examples of ingenuity as protagonists in the qualifying head-to-heads revealed their nominated heights just before their competition.

Victory went, as expected, to Turkey’s Atilla Tasdelen, a 2.14m jumper, who cleared 1.97m in the jump-off for first place.

Blackheath’s sprinting power was soon felt again as their world U20 finalist Jeriel Quainoo won the 200m with ease, coasting home in 21.43s and keeping the leading pair within range.

Lazio came out of the blocks fast in the ‘B’ final, winning the opening mixed 4x400 relay in dramatic fashion after a tactical gamble by Ireland’s Ratoath AC on the third leg, where they ran their second male runner against five female athletes, changed the dynamics of the race.

Despite having to retrieve the baton after it was dropped during the final handover, Ratoath’s Niamh Murphy still had a lead of around 40 metres in the last leg and eventually finished third as Team Lazio’s Gabrielangelo Brodone and then home runner Jose Pons passed her in the finishing straight.

The Italians built steadily on that start with victories in the 100 and 110m hurdles and second place in the men’s shot put, after which they led with 46 points, four more than Playas de Castellon.

But the home team maintained its own momentum, with Luis Fernandez running 55.31 in the men’s 400m hurdles, two hundredths behind Swiss winner Oliver Freudiger, after which Playas led by four points with four events to go before The Hunt.

The high jump guessing game was played perfectly by Ratoath’s Emmanuel Osas, in consultation with his team coach on the infield. Osas nominated 1.71m, meaning he had only to jump a centimetre higher than his opponent, Clermont Auvergne’s Clausel Mosnier, to earn three qualifying points - known as spikes in this concept - en route to the final placing jump-offs.

He did so, punching the air as he rose from the landing bed as his teammates cheered heartily in the stand. And soon Osas was doing the same thing again, to redoubled applause, after earning third place in clearing a personal best of 1.80m after Team Lazio’s Matteo Lami had failed at that height.

Victory in the women’s javelin meant Lazio went into the concluding event of The Hunt with 110 points, six points ahead of the hosts, which converted to a time advantage of two seconds.

But by the time the baton was handed on after the opening women’s 600m race the home team had a 30 metre lead which was built upon in the men’s 400m and women’s 200m, leaving Adrian Gomez with a 50 metre lead to defend in the concluding men’s 800m, which he did capably to secure a popular, rainswept victory. 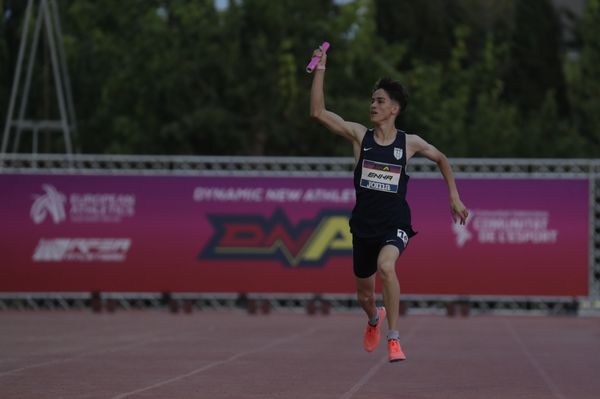 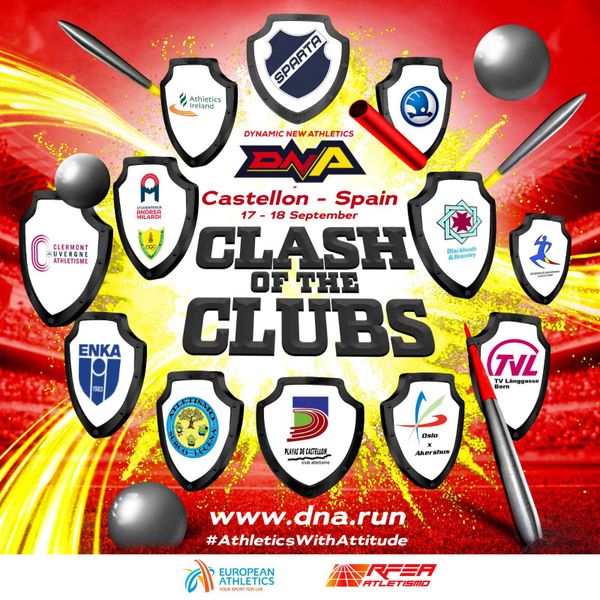