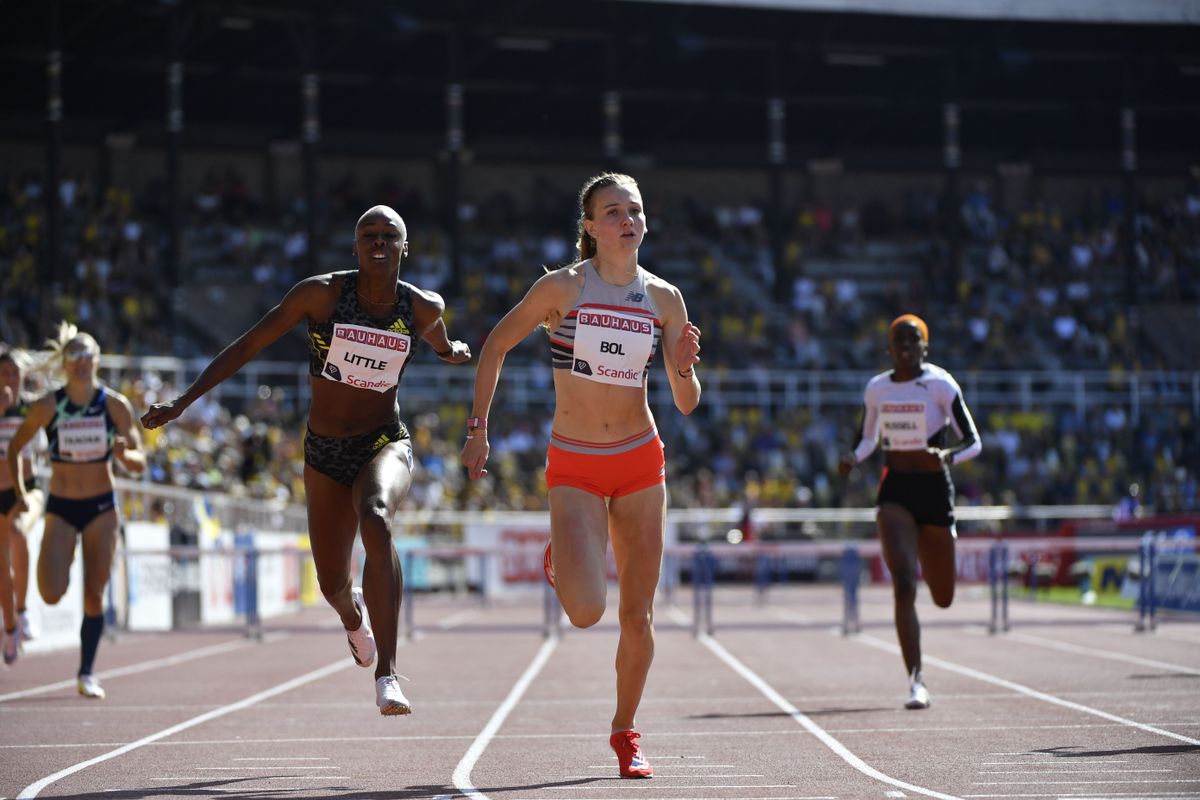 The duo both set meeting records at the Bauhaus Galan event as European champion Duplantis cleared 6.02m in front of his home crowd before three attempts at 6.19m.

European indoor champion Bol's scorching 52.37 400m hurdles time made her the fourth fastest woman in history and narrowly missed the European record held by Russia’s Yuliya Pechonkina of 52.34, a world record as recently as October 2019.

Her twelfth Dutch national record of the year also obliterated the 53.33 she ran to win the previous Diamond League meeting in Oslo on Thursday.

Meanwhile, European indoor champion Yaroslava Mahuchikh cleared a world-leading 2.03m in the high jump and fellow Torun 2021 winner Keely Hodgkinson broke her own European U20 record with 1:57.51 in the 800m.

Five-time European long jump medallist Ivana Spanovic and world discus champion Daniel Ståhl were the others from the continent to take victory.

With the sun shining, a looming Olympic Games and an excited Swedish crowd, the stage was set for Duplantis when he, along with world champion Sam Kendricks and former world record-holder   Renaud Lavillenie all made it over 5.92m.

But nobody could match the 21-year-old after his expert first-time clearance at 6.02m. Lavillenie and Kendricks stood cheering their arch rival as the bar went up a huge 17 centimetres - one more than the 6.18m that Duplantis himself cleared in Glasgow last February.

A shake of the head followed his first attempt, which ended up being the closest of the three, but the precocious Swede was still delighted with the show he was able to put on. "I feel good about today, being here with my family and friends, and everybody watching," he said.

"I think it was really important for me to just kind of go out here and try to get over six metres, and then maybe take a few better shots at the world record, but overall 6.02m was a nice jump, so I can't complain so much."

Bol admitted that she was "amazed" by her finishing time in the 400 hurdles which pipped 2015 world medallist Shamier Little from the United States by 0.02. Little put up a stern challenge off the final barrier but Bol held on for a narrow victory in the most high quality of races.

Aside from Pechonkina who ran 52.34 in 2003 when Bol was only three years old, the only other athletes to have bettered her time are world champion Dalilah Muhammad and US teammate Sydney McLaughlin, with the latter setting a world record of 51.90 a week ago.

"I'm so happy! I was one second off my personal best," exclaimed Bol afterwards who extends her win streak to nine races in the 400m hurdles. "I think running PBs is going to stop for now, but I hope to keep on getting close to this time. I can't believe it!"

In a race of the highest calibre, Ukraine's Hanna Ryzhykova smashed her lifetime best by more than one second, finishing third in 52.96 to break the national record of 53.37 held by 2004 Olympic bronze medallist Tetyana Tereschuk-Antipova. This was only the second time in history three athletes have broken the 53 second-barrier in the same race.

In the high jump, fellow Ukrainian Mahuchikh, who is still 19-years-old, was another young sensation to wow spectators in a competition that saw seven women over 1.93m.

The world silver medallist was the last to enter the action at 1.89m and seemed unstoppable as others faltered around her.

Showing the composure of a far more experienced athlete, the tall Ukranian made it look easy as she hauled herself over 2.03m at the final attempt.

That put her above American Vashti Cunningham's 2.02m on this year's world list and Mahuchikh felt she could have done even better.

"I tried 2.07 and I was so close, but not today," said the teenager who has an exciting few weeks ahead.

The reigning European U18 and U20 champion is looking to complete the gold medal set at the European Athletics U23 Championships later this month, her final competition before the Olympic Games.

"I think I can jump this high again. I'm very excited about the Olympics, it's just one month now! I hope I can get a medal, all sportspeople want one at the Olympics," she said.

Also heading to Tokyo in top form is Keely Hodgkinson, who finished fourth in the 800m behind Rose Mary Almanza of Cuba, but still smashed the 1:58.89 European U20 record she set in Ostrava in May.

While Almanza held off Jamaica's Natoya Goule for victory, 1:56.28 to 1:56.42, Hodgkinson ran a typically well-measured race to come through on the second lap for a fourth-place finish in a sparkling 1:57.51. Her time slashed more than one second from her previous European U20 record and she also moves to third on the British all-time list which is still headed by Kelly Holmes' long-standing time of 1:56.21.

In the women's long jump, world and European champion Malaika Mihambo initially jumped furthest with 7.02m but Spanovic produced 6.88m in the winner-takes-all final round in order to top the standings.

Ståhl looked relaxed amid the pressure as he threw 68.64m, with London 2017 world gold medallist Andrius Gudzius breathing down his neck with 66.97m, ahead of European U23 record-holder Kristjan Čeh’s 66.62m.

Čeh upped the tension as he moved up into second past Gudzius in the crucial last round, but none of the trio improved on their earlier efforts.