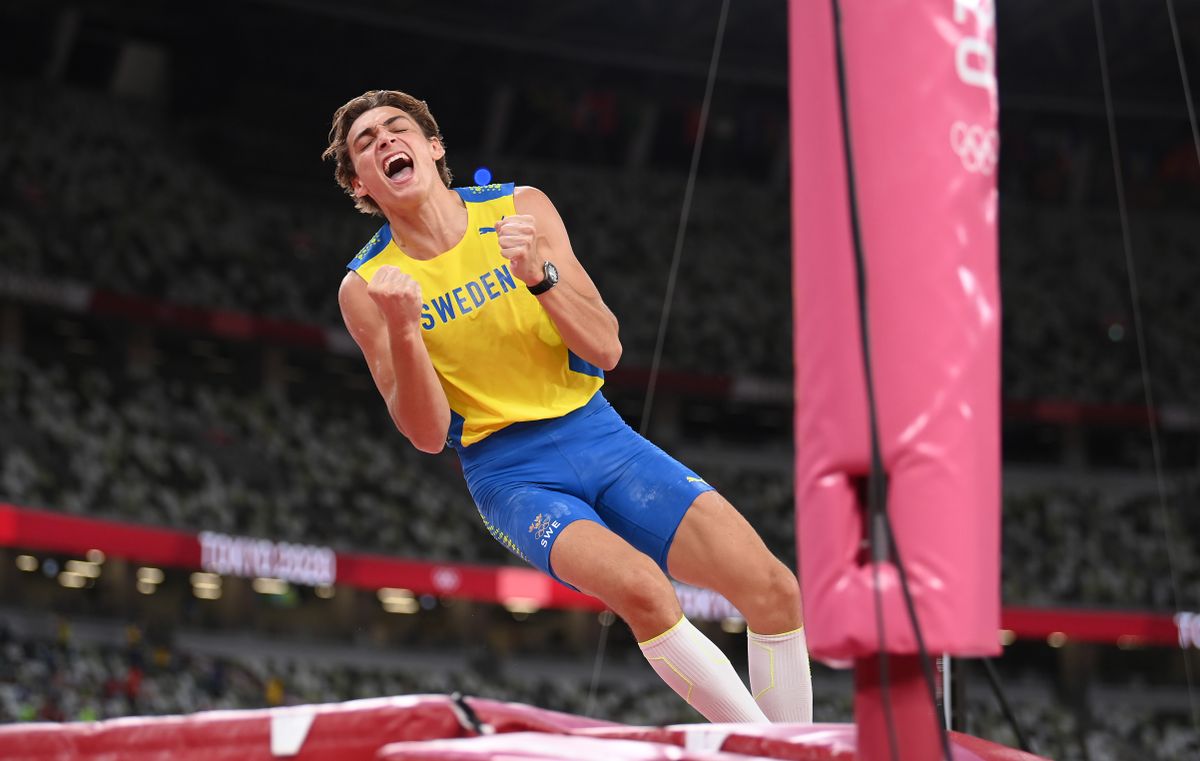 World pole vault record-holder Armand Duplantis fulfilled his dream of becoming Olympic champion, but the Swede was pushed harder than expected in a competition where he came agonisingly close to a highest ever 6.19m vault in Tokyo on Tuesday (3).

Most people had metaphorically hung the gold medal around the neck of the 21-year-old following the withdrawal of world champion Sam Kendricks of the USA due to a positive coronavirus on the eve of the Games. But instead it was his relatively unknown compatriot, the Pan-American Games winner Christopher Nilsen, who asked the toughest questions with a 5.97m lifetime best clearance that would have won all but the last two Olympic gold medals.

Only once Duplantis had cleared 6.02m on his first attempt - a feat Nilsen could not match - was he assured of adding the much-craved title to his collection that includes the European gold he won in Berlin in 2018.

Meanwhile, British teenager Keely Hodgkinson added a sensational Olympic 800m silver to her European indoor title in a final fronted by two 19-year-olds who set remarkable national records. Ahead of her, the unstoppable talent of Athing Mu, became the first American woman to win gold since Madeline Manning 53 years ago, running a scintillating 1:55.21.

Before that race had started, the temperature of the men's pole vault final had begun to crank up a notch with seven men going over 5.80m. Among them, Emmanouil Karalis of Greece, who shouted in delight after equalling his best ever clearance at that height. From then on, it was expected that three-time world medallist Piotr Lisek would go all-out to do better than his fourth place finish at the last Olympics which was won famously on home soil by Thiago Braz of Brazil.

Showing the sort of form he hasn't showed since that Olympic final five years ago, Braz looked inspired as he cleared the next height of 5.87m - which would eventually seal him bronze - but Karalis and Lisek went out. Vaulting sparingly after landing awkwardly on an already injured ankle in warm-up, 2012 Olympic champion Renaud Lavillenie passed his way up to 5.92m but ultimately bowed out with a best of 5.70m.

Then came the final few tense and defining moments of the competition. But you would hardly know it. In a typical show of camaraderie, Nilsen was quick to congratulate and joke with Duplantis after each clearance. After all, the two have been close since their high school days in the United States. But the American performed superbly in Kendricks' absence, making it over 5.97m - the highest jump of his life - open-mouthed as he hung agonisingly in the air and even clipped the bar on the way down.

Duplantis replied straight back, leaving the ground with stunning speed and athleticism at 6.02m. A fired-up Nilsen cried out to his coach saying "it's there" after narrowly failing at the same height, but he was ultimately left to settle for silver after three failures.

Yet it is worth remembering that coming into Tokyo, Braz was the only athlete to have ever vaulted over six metres at the Olympic Games. What’s more, his 6.03m record remains, against the odds. That was because despite a nail-biting first attempt at a world record of 6.19m, Duplantis brushed the bar off with his chest despite achieving daylight in terms of height over it. Cue his steely-eyed, stunned facial expression, which turned to resignation after further failures which meant that making further history would have to wait.

On the track, the 800m appeared to be a typically wide-open middle-distance battle. Three Brits - with Jemma Reekie and Alex Bell joining Hodgkinson - all had a chance of emulating compatriot Ann Packer's Olympic gold in Tokyo 1964. Yet they, and Mu, would undoubtedly have been delighted to have made it to the final on their Olympic debuts. After all, Mu only broke two minutes for 800m for the first time this year. As well as that, the European Athletics Indoor Championships in Torun in March were Hodgkinson's senior championship debut and her main goal at the start of the year was simply to compete at the European Athletics U20 Championships in Tallinn.

Those thoughts and statistics were put to the back of their minds as friends, teammates, and extraordinary young talents switched on their wise heads. Mu led with one lap to go and 57.82 on the clock. The sub-50 second 400m runner was never likely to lose her composure, despite the added pressure of an underwhelming competition for the Americans thus far with only one gold to their name before she lined up. Great Britain were yet to win a medal of any colour.

With Mu slipping away with 200m remaining, Reekie reacted first to try and close the gap. Hodgkinson held back but unleashed a brilliant home-straight kick to come through in second in a massive European U20 record and British record of 1:55.88. The gutsy but tiring Reekie was then pipped on the line by world silver medalist Raevyn Rogers who utilised her blistering pace in the closing stages to make it two Americans on the podium - 1:56.81 to 1:56.90.

The rollercoaster of exciting performances could easily have come to a halt there. But the day ended with numbers of 21.53 on the clock and the second fastest women's 200m clocking in history as Jamaica's Elaine Thompson-Herah completed an imposing Olympic sprint double for the second Games in a row.

Switzerland's Mujinga Kambundji - one of four women in both sprint finals - followed up her sixth place over 100m with a credible seventh as she grappled with the tight inside line to finish 22.30. That represented wonderful consistency for an athlete who equalled her 22.26 national record in the heat and semifinal.

Another eye-catching European performance came from European Team Championships winner Asier Martinez, one of 11 European athletes who booked their places for Wednesday's 110m hurdles semi-finals behind the fastest qualifier and world champion Grant Holloway of the United States in 13.02. Martinez, 21, came through to win his heat in 13.33 despite being in fifth place with five flights of hurdles remaining. That would have lifted the nation's spirits given that his teammate, the reigning silver medallist Orlando Ortega, pulled out with an injury prior to competing.

Former world and European champion Sergey Shubenkov, who would have competed under the Russian Olympic Committee banner, was another notable absentee from the 110m hurdles heats due to a recurring Achilles injury.

With world silver medallist and Tokyo 2020 flagbearer Amel Tuka reaching the 800m final, Bosnia and Herzegovina could already celebrate their first ever finalist in athletics at the Olympic Games.

But teammate Mesud Pezer was able to equal the history-making feat by progressing through men's shot qualification with a best effort of 21.33m. Moreover, being third overall behind the world record-holder Ryan Crouser will inspire hopes of a first Bosnian medal in the final. Italy's Zane Weir threw a personal best of 21.25m which was also over the automatic qualifying mark, while Armin Sinancevic of Serbia also remains in the competition with his furthest mark being 20.96m. 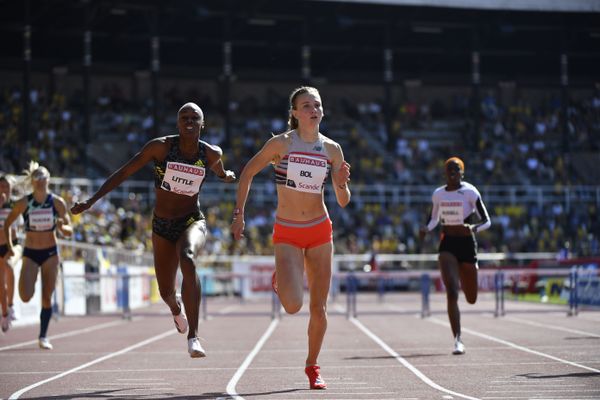 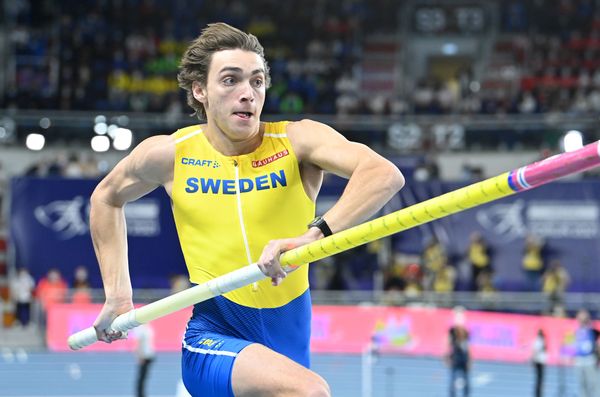 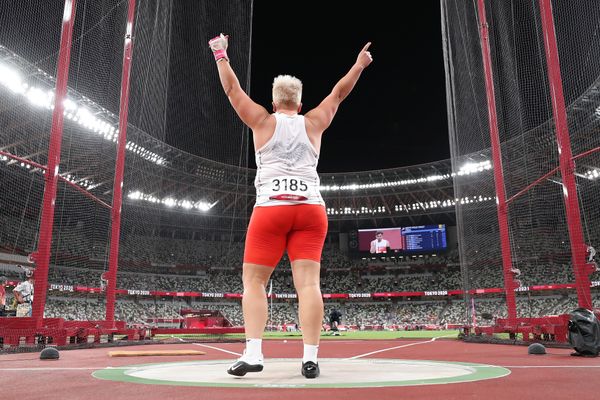