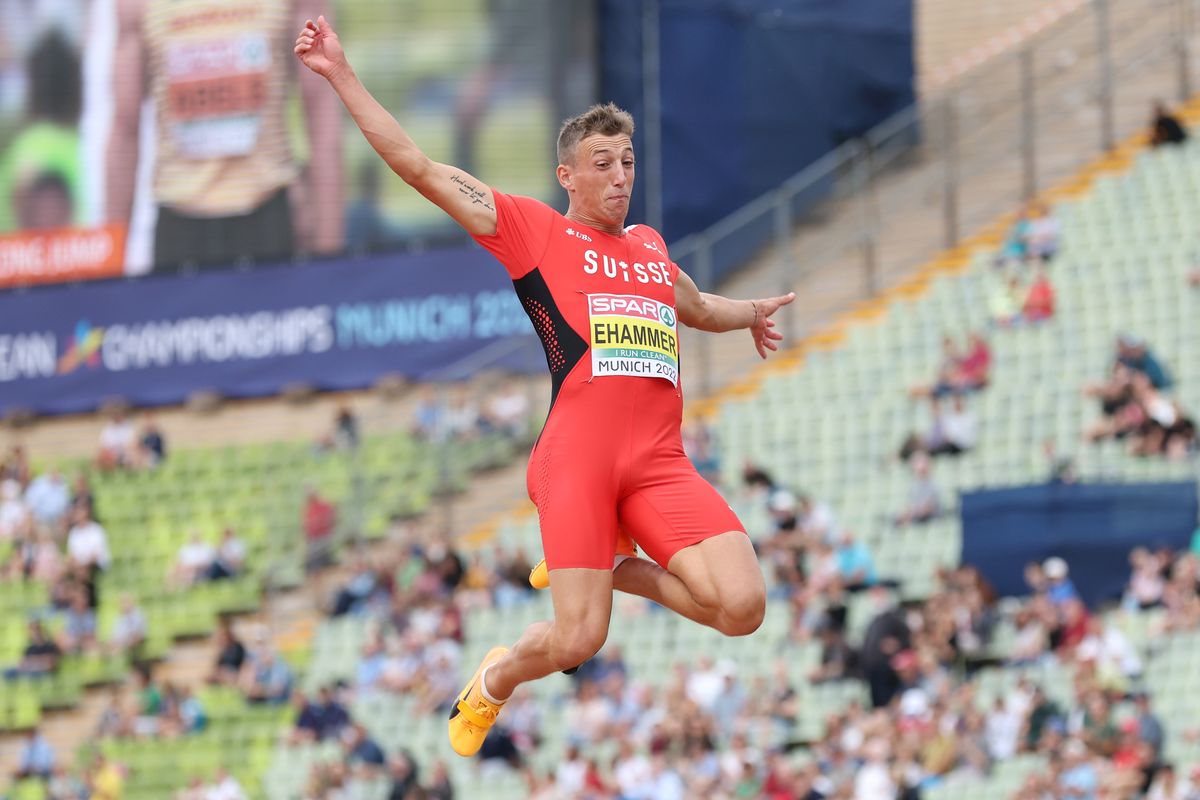 Ehammer in early command of the decathlon after 8.31m long jump

Already leading the way in the decathlon after world champion Kevin Mayer dramatically bowed out after the opening event, Simon Ehammer proceeded to put the hammer down with a monster championship best long jump of 8.31m on the opening morning (15) of action at the 2022 European Athletics Championships, part of the multi-sport European Championships.

Fatigued after the exertions of regaining the world title in Eugene three weeks ago and wary of worsening an adductor problem, Mayer slowed to a jog in the third and final 100m, crossing the line in 11.67, before announcing his withdrawal from the competition.

As the Frenchman was making his exit, giving a farewell wave to the Olympic Stadium crowd, Ehammer bagged 961 points as winner of the race in 10.56 (+0.7).

Returning to decathlon after taking bronze in the long jump in Eugene, the 22-year-old Swiss athlete followed up with his superlative 8.31m leap into a headwind of 1.0 for good measure.

The previous best decathlon performance in the championship dated back to 1978 when Great Britain’s two-time champion Daley Thompson jumped 7.93m in Prague.

Ehammer’s mighty effort was just 14 centimetres down on the decathlon world best, and outright 2022 world lead, he set en route to third place in the Hypo Meeting across the Austrian border at Gotzis in May.

The morning session closed with the third event, the shot put, and Dester closed the gap to 246 points with a personal best of 14.56m.

Former world champion Niklas Kaul was down in eleventh with 2447 albeit with some very strong events to follow with fellow Germans Kai Kazmirek, the 2017 world bronze medallist, 12th on 2435 and defending champion Arthur Abele, tackling his final decathlon at the age of 36, down in 16th with 2417.

Sadly, Mayer will have to wait another two years for a shot at a title that has eluded him thus far in his illustrious career.

The world record-holder and two-time world champion took silver in Zurich in 2014 but fouled out in the long jump in Berlin in 2018, a performance which spurred Mayer on to break the world record in Talence the following month.

In Munich his challenge came to grief in the opening event. Mayer was struggling to keep pace with Ehammer and the rest of his rivals in his 100m heat before slowing to a jog and crossing the line seventh and last in 11.67. 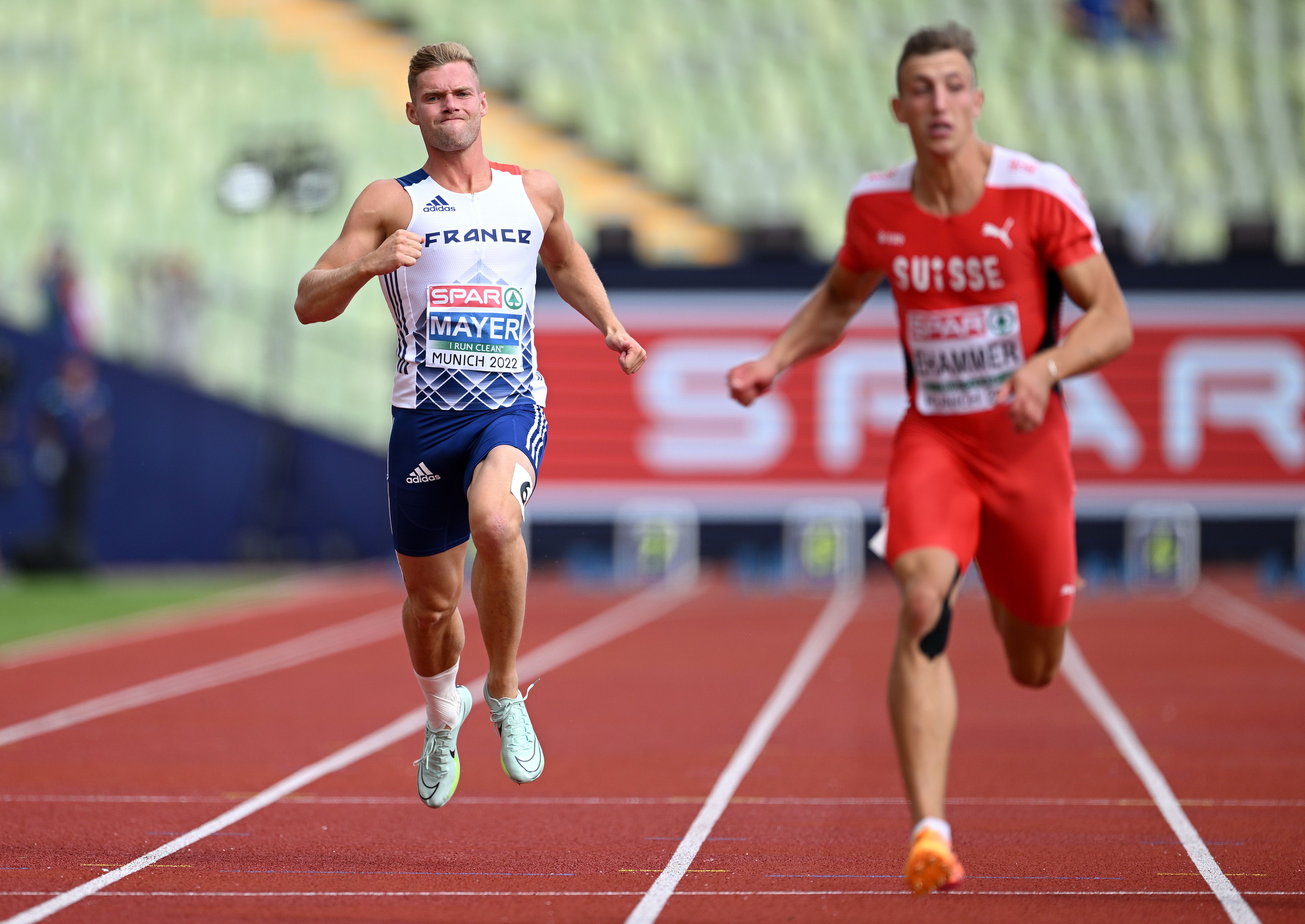 A pained expression on his face, he sat on the track clutching his left leg before waving farewell to the crowd as he exited the arena.

Attempting to mount another gold medal challenge so soon after his winning performance at the World Championships in Eugene had been too much.

“It’s really hard to do two decathlons in three weeks,” said Mayer. “I did everything I could to be competitive again but I stopped before the injury happened. I could feel it growing and growing.

“I gave a lot to become the world champion in Eugene. I didn’t expect to win there. It was a bonus and it gave me the chance to come here and be competitive. I took my shot. I didn’t want to miss it but even before Eugene I had a little strain in my leg.

“I just didn’t want to injure myself for next year. Now I just need to recover and go on vacation with my family. I will come back stronger next year. Maybe the indoor season will be my next target.”

The next target for Tomas Stanek and Armin Sinancevic will be shot put gold in the opening day’s evening session after the pair emerged as the only men to nail automatic qualifying mark of 21.15m.

Stanek, the reigning European indoor champion from Czech Republic, opened with a throw of 21.39m and Sinacevic was the only one of his rivals who managed to go even further.

Seventh in last year’s Olympic Games, Sinancevic opened with a foul but made no mistake with his second effort, putting the shot out to 21.82m to top the qualifying list for the final.

Third and fourth best from the two groups were the Poles who took silver and gold at the last edition of the championships in Berlin four years ago: Konrad Bukowiecki throwing 20.96m and defending champion Michal Haratyk 20.85m.

“I’ve gained some self-confidence from throwing personal bests in training,” said Stanek. “The key thing in the final will be to stay calm and focused.”

The leading qualifier for the women’s shot final, which also takes place on the day one evening schedule, was pre-event favourite Auriol Dongmo of Portugal.

The 32-year-old reigning world and European indoor champion was the only woman over the 19m line, with 19.32m.

Mayer was not the only leading light to struggle on the opening morning in the stadium which staged the 1972 Olympic Games.

In the qualifying round of the women’s pole vault, former Olympic and world champion Aikaterini Stefanidi  registered two failures at 4.40m – 45cm lower than the championship record she set in Berlin in 2018 – before successfully negotiating her opening height. 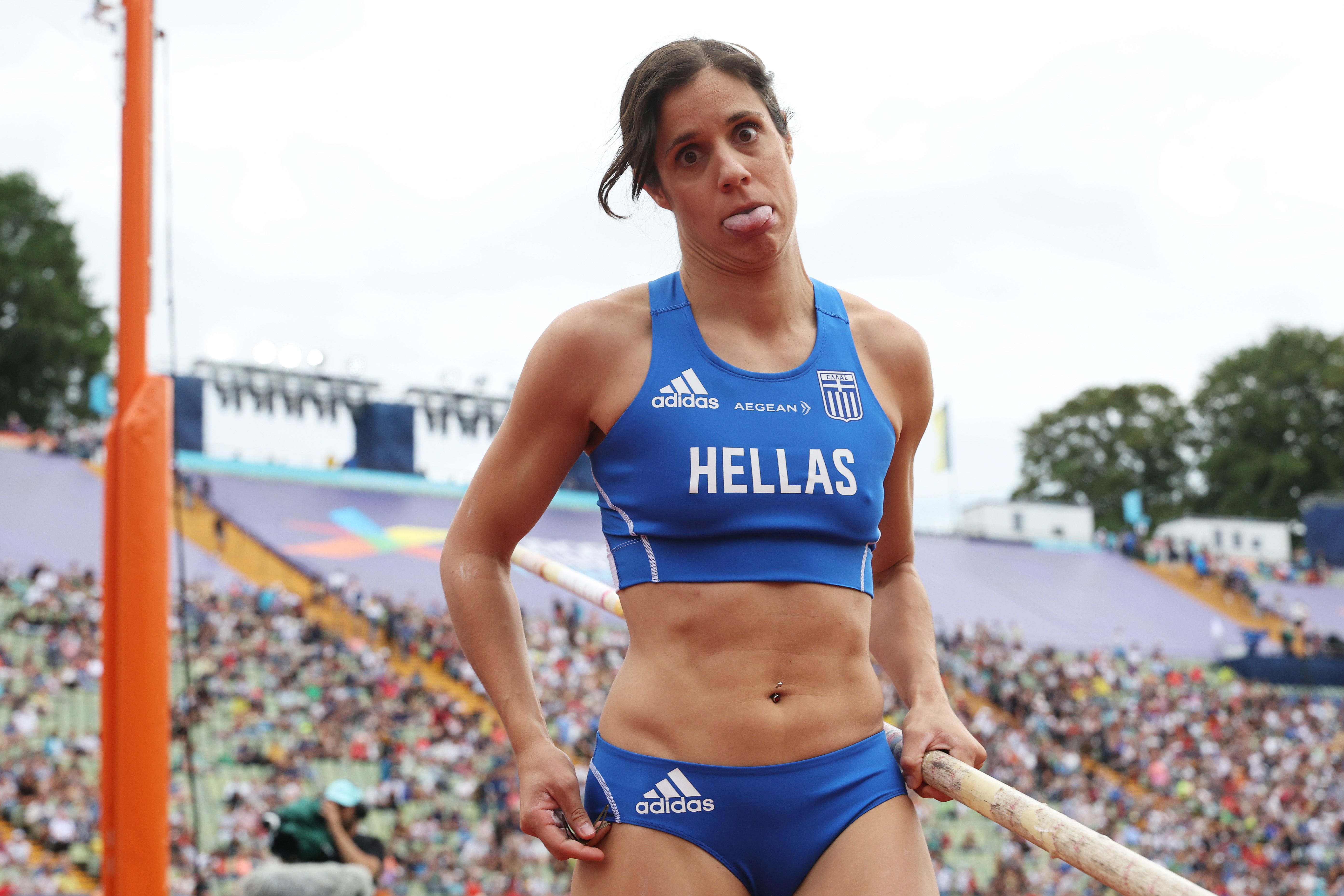 Not a fan of competing early in the morning, the 32-year-old Greek vaulter went on to secure her place in the final, and a shot at a third successive title, with a first time success at 4.50m. Only two other women managed that height at the first attempt: Slovenia’s Tina Sutej and Lina Retzius of Norway.

Stefanidi’s teammate Militadis Tentoglou was unable to reach the automatic qualifying distance of 8.05m in the men’s long jump but the defending champion comfortably secured his passage with a leap of 7.94m (+0.4).

That proved to be the second best qualifying mark behind the 8.06m (-1.4) of Sweden’s world indoor silver medallist Thobias Montler, also the silver medallist behind Tentoglou at the last two editions of the European Athletics Indoor Championships.

The top 12 ranked performers based on season’s bests in the men’s and women’s 100m were all given byes from the first round heats. Fastest qualifier in the men’s section was Israel Olatunde, whose 10.19 PB (+0.1) was just 0.01 outside the Irish record Paul Hession cocked at the European Cup First League A meeting in Vaasa in 2007.