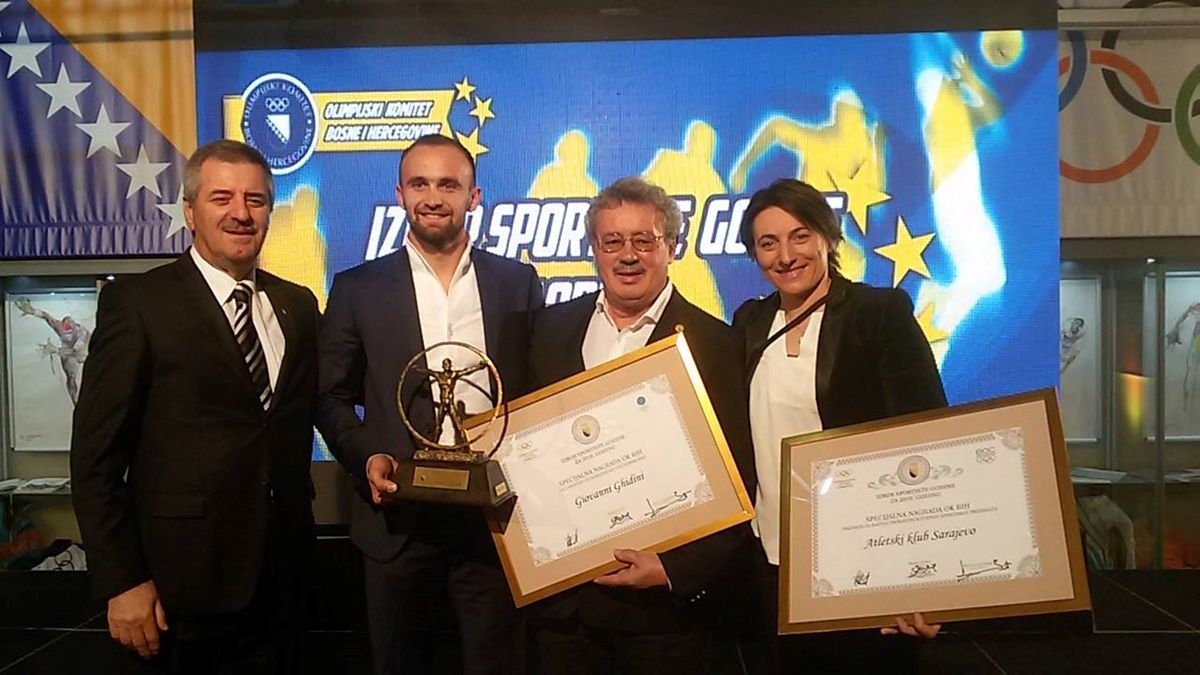 This feature is the third in a new series in which we profile the outstanding recipients of the Women’s Leadership Award.

Female athletes might have equality on the field of play but there is an unquestionable disparity in many other areas of the sport. The Women’s Leadership Awards recognise outstanding women who have excelled as a coach, volunteer, administrator or elected official.

The Women’s Leadership Awards were created in 2009 and remain an important strategy to promote the development of women leaders and gender equity in athletics. Last year, 19 women representing 19 Member Federations were recognised for their outstanding contributions to athletics.

Vahida Kozic was one of the recipients of the Women’s Leadership Award last autumn for her years of committed and outstanding service to athletics in a range of capacities.

“During my journey I’ve had a chance to meet different people and I was always eager to learn more and more,” said Kozic. “The award added value to my efforts and I now know I have the knowledge and the additional will to go further in making my environment a better place for athletics.”

A former athlete in her own right, Kozic is now on the Athletic Federation of Bosnia and Herzegovina Executive Board but her main responsibilities on a day-to-day basis are centred on the running of the multi-sport Athletic Club Sarajevo where she serves as the club’s director.

Kozic has been a figurehead in driving forward the club’s development and one of her proudest moments thus far was securing much needed funding to redevelop the club’s crumbling outdoor athletics track.

Despite backing from the IAAF and support from the national federation, Kozic encountered intransigence from politicians at a local level who were reluctant to guarantee the necessary funding - a bi-product of the sport’s fledgling profile in the country.

“There were many challenges to overcome during this project. For sure athletics is not one of the most popular sports in Bosnia and as such it was very hard to get the financing,” recalled Kozic.

The local authorities were eventually won over and the new track was completed two years ago. Kozic has said the new track has reduced the number of injuries and has helped to raise the profile of the club locally and nationally.

“It took a lot of persistence and coordination on different levels: club, national association, IAAF, IAF and local community represented by canton and federal government. Our athletes - from kids, youths and seniors - now have a new track to enjoy and to train on.

“By implementing this project we have gained the respect of the sporting community at local and national level which has made it easier for our future projects,” said Kozic.

Kozic is also particularly engaged in youth athletics and the new track has facilitated the roll-out of programmes serving the dual purpose of introducing youths to athletics and also instilling them with useful life skills for their personal development. Kozic hopes these projects will also instil in them a lifelong love of the sport.

“In each kids’ competition we try to include many different events so the kids learn jumping, running and throwing skills from a young age. But the value of the competition is also to build team spirit, to respect the opponent and develop fair-play. Our mission is to make athletics popular for kids,” said Kozic.

“Another mission is to keep each member involved in the club not only as an athlete but also as a referee, volunteer, technical staff, announcer or a coach. I would like to say the goal is to get them infected with athletics for life, but also use their talents and creativity to benefit the club and athletics.”

Likewise, Kozic also remarks there is still a disparity in the gender balance at leadership level in sport. “Women are well represented in terms of quality,” said Kozic. “But in regards to numbers there is research showing the numbers are still low regarding women in athletics and in sport.”

Kozic is clear in terms of what needs to be done - and what needs to change - to bring more women into the sport at leadership level.

“The solution is to empower women and girls through sport, and to create an environment to develop female leaders. Capable women with the relevant skills face many barriers within the culture of sports organisations - the reason is mostly male-dominated culture but there are other reasons as well, such as family and long working hours.

“Sports organisations need to help women rising through the sport by: clearly identifying the ‘stepping stones’ to the leadership positions because they tend to stay at one position or don’t see the opportunities to develop. One of the ways how to help women could be co-opting women onto committees and boards, so they gain experience of these positions.

“Also one solution should be providing women with training and mentoring as a part of career building, which in development of my career was the key factor.”