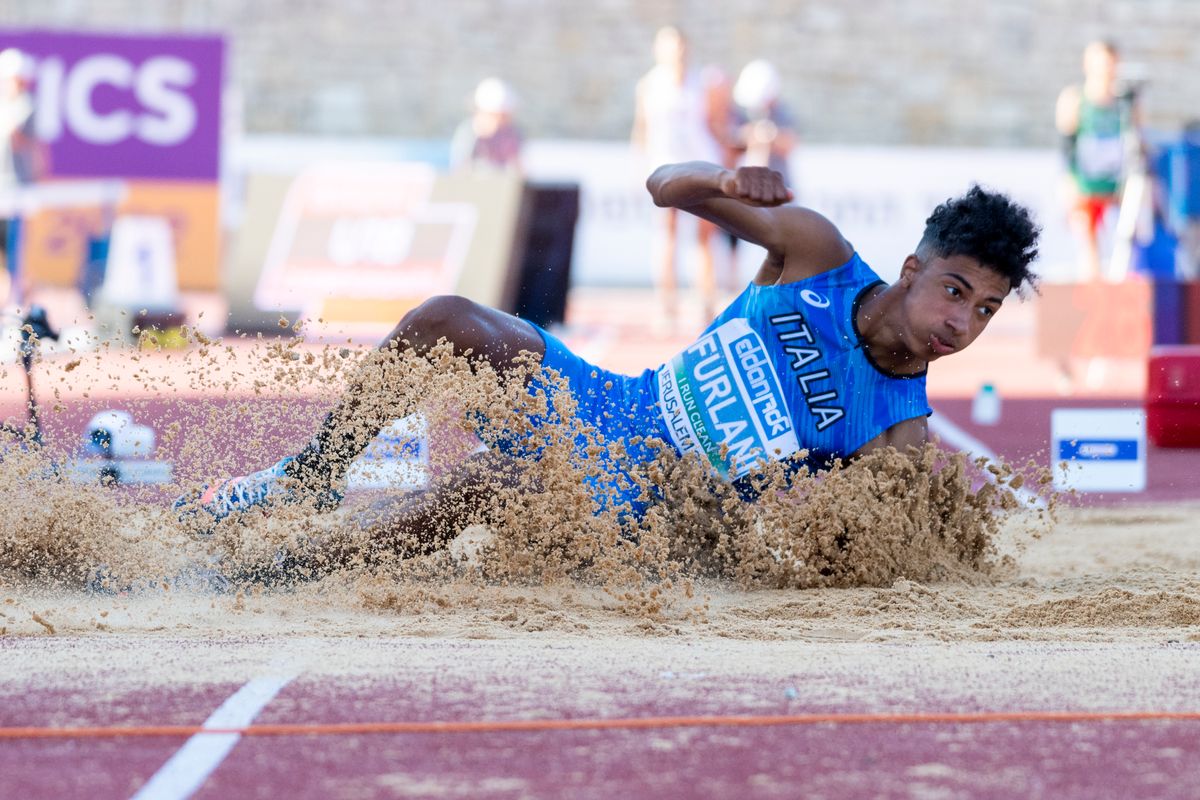 The men’s long jump qualifying was one of the liveliest and most dramatic events of the evening which was bookended by championship record-breaking performances.

With his first attempt, France’s Thomas Martinez booked his place in the final by eclipsing the previous championship record by one centimetre with 7.61m.

But his record was to last a little more than half-an-hour. Mattia Furlani’s hopes of winning two gold medals looked in a vulnerable state after the 17-year-old began his campaign with two no jumps but the precocious Italian made no such mistake on his last attempt.

Competing in just his second ever outdoor long jump competition, Furlani relied on all of his raw talent and athletic ability, improving the championship record for the second time with 7.62m.

Furlani made a stir domestically by recently smashing Andrew Howe’s Italian U18 record with 7.87m in his first serious outdoor competition in the discipline. He is primarily a high jumper and has also entered this event in Jerusalem.

“I was a little worried at the start, the wind was very strong but I needed to do a jump that made me feel more secure. At the end of the day, I wanted to do a jump that put me in a better position. However, the most important thing was to qualify for the final, and now I need to stay focused so I can bring home the best possible result,” said Furlani.

“Tomorrow morning, I will be taking part in the high jump qualification, and that should be a good experience. I’m already thinking ahead for the future.”

Breakthrough performances from Reparaz and Zakrzewski in the 100m heats

Spain’s Ainhoa Reparaz was only ranked 17th ahead of the championships based on season’s best performances but the 16-year-old put herself in the medal discussion in the 100 metres in a little under 12 seconds.

Reparaz shattered her lifetime best to pieces in the fifth and final heat of the 100m and she even took ownership of the championship record with her 11.53 performance.

I wasn't expecting this at all, no way. I am speechless, but extremely happy about this. I'm not going to change my plans after this - I need to remain calm as ever,” she said.

Great Britain’s Lia Weddeburn-Goodison was credited with a faster time in the 100m heats but her 11.48 was accompanied by an illegal following wind of 3.1 m/s. Her compatriot Renee Regis - the daughter of former British internationals John Regis and Jennifer Stoute - also progressed as a heat winner in 11.66.

Another breakthrough performance of the session came in the men’s 100m heats courtesy of the 16-year-old Pole Marek Zakrzewski.

Drawn in the second lane, Zakrzewski could have afforded to ease down but he ran through the line and his reward was a super-fast 10.29 clocking - the fastest of the day by more than one-tenth from the showboating Swede Isak Hughes in 10.44.

Zakrzewski’s time was marginally wind-assisted at 2.2 m/s but in calmer conditions, the Pole will surely challenge the championship record of 10.43 set by Germany’s Milo Skupin-Alfa in 2016 and maybe even the European U18 best of 10.27 held by France’s Jeff Erius.

There was another fast albeit wind-aided performance in the 110m hurdles heats. Finland’s Rasmus Vehmaa showed some exceptionally slick hurdling and led the heat qualifiers by more than two-tenths with his winning time of 13.18.

His time was 0.01 faster than the championship record but the wind was above the legal limit at 3.7 m/s.

Koscak in command after four events in the heptathlon

Jana Koscak leads the heptathlon overnight and the Croatian has a comfortable cushion of over 300 points over her nearest competitor.

Her standout performance was the high jump in which she cleared 1.87m, adding a whopping eleven centimetres to her previous lifetime best, and she put together two more solid events this evening to consolidate her lead.

“The highlight today has definitely been the high jump. I jumped 1.87m and that is my personal best - a huge personal best for me compared to the previous one. On the other hand, I am a little disappointed with the 200. Tomorrow it is Javelin time, and I love the Javelin, so I hope I get some more points then,” said Kocsak.