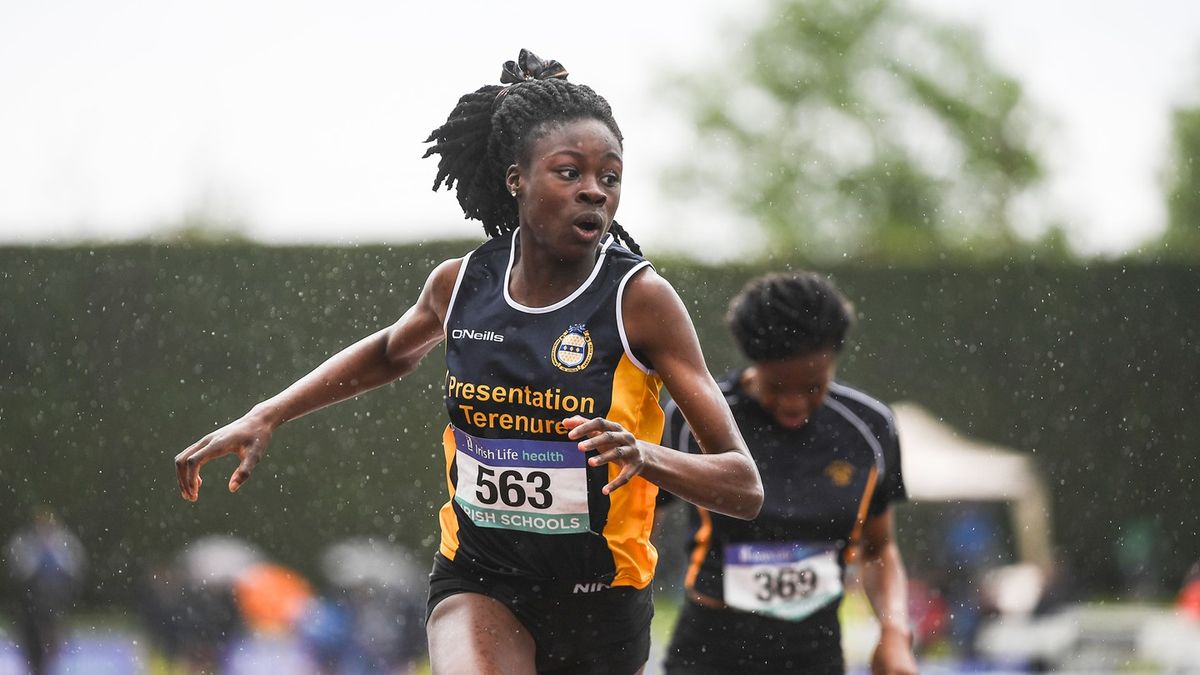 Getting to know Rhasidat Adeleke

Ahead of the European Athletics U18 Championships in Gyor, Hungary from 5-8 July, we will be speaking to some outstanding young athletes who look set to star at the second edition of the event this summer.

In the second instalment of the series, we interviewed Rhasidat Adeleke, one of the many rising talents of Irish sprinting. Adeleke’s teammate Gina Akpe-Moses won a silver medal in the 100m at the inaugural European Athletics U18 Championships in Tbilisi two years ago and Adeleke has medal aspirations in Gyor over 200m.

When did you start athletics and how did you get into sprinting?

I started athletics when I was 12. My athletics coach in primary school told me I had a huge talent after I won several primary school competitions and suggested I should join a club. When I joined, I kind of competed in everything but when I was 13 or 14 I turned my focus to sprinting - I thought it was what I was best at.

What is your favourite thing about sprinting?

My favourite thing about sprinting is the training for it; I actually enjoy it and it’s easier than the cross country training I used to do. I just love the satisfaction of just being able to run fast. I get a lot people asking me to race them which is quite funny at times!

If you weren’t a sprinter, which event would you like to compete in and why?

If I wasn’t a sprinter I think I would compete in either the long jump or heptathlon. I won a lot of long jump titles in national age-group competitions but unfortunately I stopped because it resulted in a a lot of knee pain. I would also like to compete in the heptathlon because I have experience in all the events required and I’ve always enjoyed doing a variety of events.

Which is your favourite event and why?

The 200m is my favourite event. Being six feet tall, I don’t have the best start so I have time to make up ground I’ve lost from the start over the longer distance. I like knowing that I have a lot to improve on and I can definitely run faster times. I believe it’s what I’m currently best at - and it’s fun!

Rhasidat Adeleke is only 15 but she has already clocked 23.80 over 200m indoors!

She will be one of Ireland's main medal hopes at the second edition of the European U18 Championships in Gyor, Hungary in July.

What are your favourite and least favourite training sessions?

I like short, fast sprints in which I get a long recovery but I’m not a fan of speed endurance sessions with fast reps and a short recovery. Although those sessions are challenging, they’ll only make me stronger and they have to be done if I want to be the best at what I do. I’m eager to improve and if being a good athlete was easy, everybody would be one.

Who is your sporting hero and why?

I don’t really have a particular sporting hero but I’m very fond of Shaunae Miller-Uibo [the reigning Olympic 400m champion] because of her amazing achievements. She’s an athlete I’d compare myself to and would like to follow her footsteps and be like her in the future.

Who has been the biggest influence in your sporting career thus far?

My mum has really influenced me to do well as she’s always there for me - win or lose. She supplies me with everything and anything I need; she makes time to attend all my competitions abroad or at home and she’s also my taxi driver so I owe it all to her!

What is your proudest sporting achievement so far?

My proudest sporting achievement so far has to be coming second at the European Youth Olympic Festival in Gyor but breaking the national U18 and U20 200m indoor record in 23.80 is close behind that.

If I continue working hard with a positive mindset hopefully I will have a new proudest sporting achievement after the European U18 Championships in Gyor!

Do you have any special talents away from athletics?

I’m a pretty good basketball and volleyball player but I had to quit both as they didn’t fit my schedule well and interfered with my athletics training.

What are your expectations at the European Athletics U18 Championships in Gyor?

My main goal is to earn a spot on the podium - preferably the top but I’ll be blessed to come away with a medal of any colour. At the end of the day I’d have worked hard throughout the season before the championships and hopefully things will come together when most important.

Away from athletics, what are your hobbies?

When I’m not on track I like binge watching my shows on Netflix, listening to music or going out with friends.

What music are you listening to at the moment, and what is your favourite workout track?

I’m a big fan of Migos and Cardi B. Cardi B just released her new album called ‘Invasion of Privacy’ and I literally have all the songs playing on repeat. Most of her songs are really upbeat and lively, so they’re perfect for training sessions too.

What was the last film you saw?

What is your favourite show to binge watch?

I’m currently obsessed with How to Get away with Murder and I’ve recently started watching Orange is the New Black.

What is your favourite app?