Great Britain’s Elliot Giles stormed to the second fastest indoor 800m time in history at the Copernicus Cup in Torun on Wednesday (17) evening, the city which will stage the European Athletics Indoor Championships in just over two weeks’ time.

Giles has been the in-form athlete at this distance with back-to-back victories in Karlsruhe and Lievin in recent weeks but the former European bronze medallist displayed hitherto unseen form at the Arena Torun with a scintillating 1:43.63 clocking, a time which has only been bettered indoors by Denmark’s Wilson Kipketer.

Once again, Giles tracked the pacemaker with real intent through the first 500 metres but despite the incredibly quick pace, Giles was still pursued on the penultimate lap by his teammate Jamie Webb and Sweden’s Andreas Kramer with Poland’s supreme tactician Adam Kszczot beginning to emerge into the picture.

Even as the bell sounded, victory was still far from assured as Giles held off an attack from Webb who drew even with his compatriot on the last lap. But Giles has also set a 1500m lifetime best of 3:36.90 this season and he drew on his newfound endurance, cutting loose in the last 200 metres not only for his third victory of the season but also the second fastest time in history in 1:43.63 ahead of Webb in 1:44.54.

Both Giles and Webb finished inside Sebastian Coe’s British indoor record of 1:44.91 which was set in 1983. The British duo rocket to second and ninth respectively on the world indoor all-time list which is still headed by Kipketer’s formidable solo 1:42.67 effort from the 1997 World Athletics Indoor Championships in Paris.

Giles said: “I felt in great shape and I thought I could win this year, but I’m overwhelmed right now with the time I ran!”

In an excellent quality race for the European contingent, Andreas Kramer set a Swedish indoor record of 1:45.09 in third with reigning world indoor and three-time European champion Kszczot fourth in a season’s best of 1:45.22.

For the first time since the 2014 World Indoor Championships in Sopot, three men cleared 2.34m or higher in the same competition in Torun last night. But while the venue was different, the track inside the Arena Torun is the same one which was used for those global championships seven years ago.

Belarusian Maksim Nedasekau had only cleared 2.23m in his four competitions prior to Torun but the European silver medallist sailed through the heights last night.

First-time clearances at 2.25m, 2.28m and then a national indoor record of 2.34m proved crucial in keeping Nedasekau ahead of Ukrainian veteran Andriy Protsenko and reigning European indoor champion Gianmarco Tamberi who both cleared 2.34m on their third attempts.

Protsenko and Tamberi finished second and third respectively on countback but their performances still marked a return towards their very best form. This was Protsenko’s best performance since his annus mirabilis in 2014 when he cleared 2.40m and a 2.34m clearance for Tamberi is his highest mark since tearing his ankle ligaments just before the 2016 Olympics in Monaco.

European outdoor champion Paraskevi Papahristou produced another of the highlights from a continental standpoint in the triple jump.

Papahristou, who hadn’t surpassed the 14 metre-line prior to last night, bounded out to an indoor lifetime best and world lead of 14.60m in the fifth round. This surpassed Belarusian Violetta Skvartsova, the former European U20 champion, who set the standard in the second round with an outright lifetime best of 14.39m.

Reigning European U20 400m hurdles champion Femke Bol put in another stellar performance in the 400m, underlining her status as the gold medal favourite in this discipline at the European Indoor Championships in two weeks' time.

After opening her season with a 50.96 clocking in Vienna, Bol improved to 50.81 in Metz and the 20-year-old ameliorated her lifetime best for the third successive race in the Arena Torun with an outright Dutch record of 50.66.

Bol also defeated all of her principal rivals in the process. Reigning European outdoor champion Justyna Swiety-Ersetic opened her season with 51.80 with Bol's training partner Lieke Klaver, who led through 200m in under 24 seconds, fading to third in 51.92. European indoor champion Lea Sprunger from Switzerland won the first race of the 400m in 52.38. 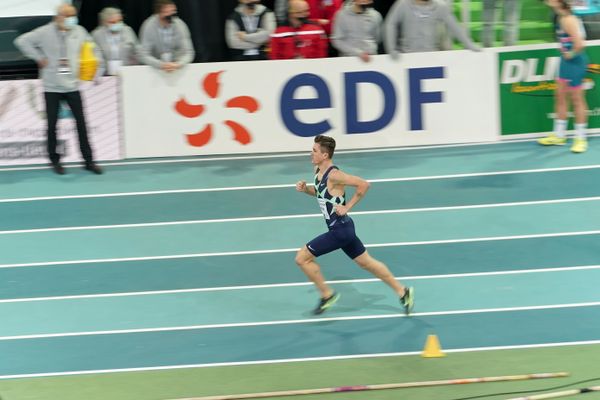 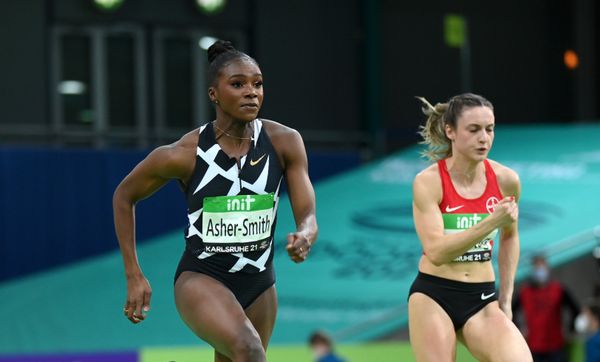 Asher-Smith blitzes to a 7.08 world lead in Karlsruhe