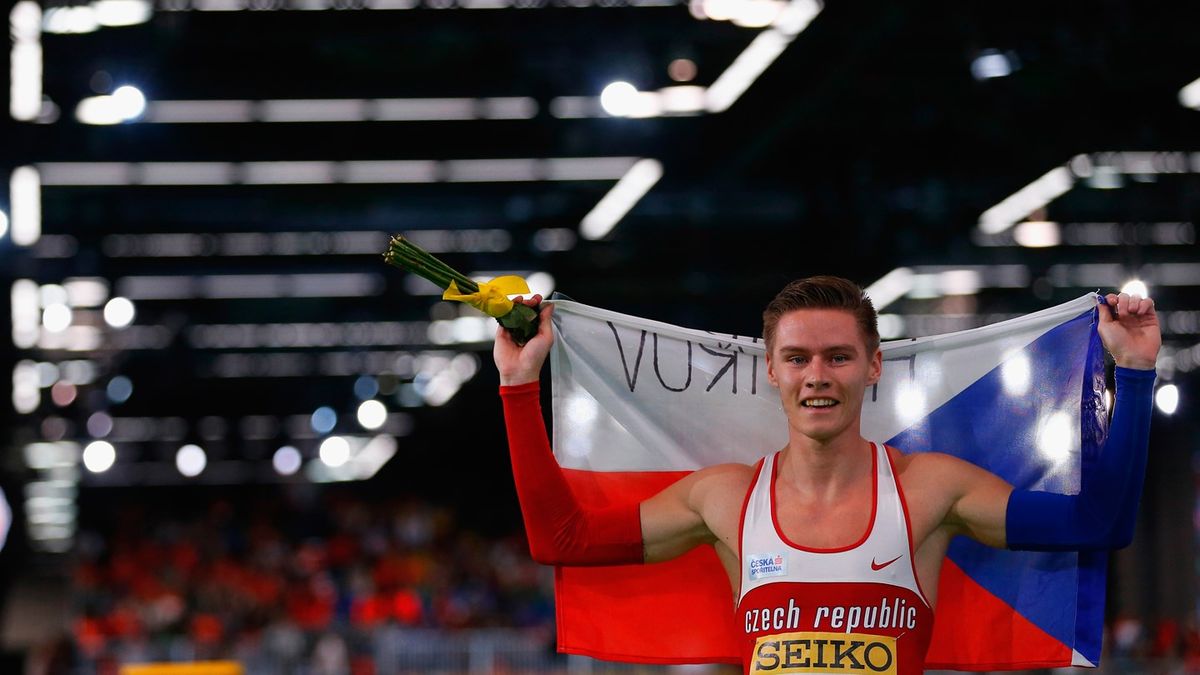 Europe won three gold medals, and a series of silver and bronzes, on a brilliant third day of the IAAF World Indoor Championships in Portland as Pavel Maslak retained his 400m title, Sifan Hassan stayed strong for 1500m glory and Gianmarco Tamberi was first in the high jump.

Pavel Maslak became the first European man to successfully defend the 400m at world indoor championships with a performance where for once he did not dominate.

As Trinidad and Tobago’s Deon Lendore took control when they broke from their lanes, Maslak remained comfortable in second.

The Czech Republic star, the double European indoor champion aswell, stayed on Lendore’s shoulder before moving ahead as the speed increased in the second lap and from that moment on he was never going to lose.

As he has shown in Gothenburg, Sopot and Prague over the past two years, Maslak finds something extra with 50m left.

Qatar’s Abdalelah Haroun was the big threat but when he made his challenge as they turned from home, it was always going to be too late.

Is there a more versatile athlete in the world at the moment than Sifan Hassan, the newly-crowned world 1500m champion?

The Dutchwoman brilliantly added this title to her outdoor European 1500m crown from 2014 and her European indoor and European Cross Country golds from last year with a run of remarkable strength, just when it looked like she might be overtaken.

Australian Melissa Duncan set the early pace over the seven-and-a-half laps, but there was no concern from the pack five metres behind about the gap that was growing.

With three laps to go, Hassan moved alongside Duncan before taking the lead - and more importantly, taking control.

Chased by Ethiopian pair Dawit Seyaum and Gudaf Tsegay, Hassan knew the threat was growing, but she has such tenacity and body strength.

Even when Seyaum narrowly took the lead, Hassan came back with more. And as they reached the home straight, the Ethiopians were just out-run.

Hassan won in 4:04.96 from Seyaum in 4:05.30 and Tsegay in 4:05.71 and will now focus on even more medals this summer, where in Amsterdam in July she will be one of the big names for the home crowd at the European Athletics Championships as she defends her title.

Tamberi has the face of a champion

You cannot fail to miss Italy’s Gianmarco Tamberi and now he can be recognised for a gold medal around his neck along with his trademark half a beard.

Tamberi won the high jump as the only man to clear 2.36m in a competition where he struggled at 2.29m and 2.33m, needing three attempts to go over them both.

But after Great Britain’s Robbie Grabarz, the 2012 European champion, and American Erik Kynard, had cleared 2.33m, the pressure grew in the chase for gold.

Tamberi, with a beard on just the left side of his face, found his best jump when it really mattered and the 2011 European junior bronze medallist was back on the podium.

It was a competition where Tamberi and Grabarz, who also won Olympic bronze in London four years ago, both needed two jumps in their opening 2.20m as Olympic silver medallist Kynard went over in one.

And not until 2.33m did Kynard fail at the first attempt.

But 2.36m was the difference, and Tamberi triumphed from Grabarz, after his first-time clearance at 2.33m gave him second on countback from Kynard in an event where Qatar’s defending Mutaz Essa Barshim (2.29m) was fourth.

Dafne Schippers always knew that American Barbara Pierre would be a big rival in the 60m and so it proved.

In a final where Schippers was beaten to the gun by Pierre, there was no coming back for the Dutch star.

Schippers moved well through the transition phase as she edged closer to Pierre but the American was always just that bit in front.

Hungary’s European indoor shot put champion Anita Marton could not have been closer to becoming world champion as American Michelle Carter snatched victory from her grasp.

But then in the final round, Marton broke her national indoor record mark of 19.23m which she set in Prague 12 months ago with a stunning 19.33m.

Gold looked hers until Carter took to the ring for the attempt of the whole competition. And she saved her best for last too - with a world-lead of 20.21m to claim the title.

Happy times for Gierisch and Papahristou

Germany’s Kristin Gierisch went from fourth place at last year’s European Athletics Indoor Championships in Prague to silver here in Portland in a women’s triple jump competition won by Venezuela’s Yulimar Rojas (14.41m) with her only legal effort in the second round.

Gierisch had moved into second place with 14.16m in round four before extending that distance to 14.30m with her next jump.

She put so much into her final effort, but reached only 14.08m, yet it hardly mattered such was her delight and the smile across her face.

But it did not quite match the celebrations of Greece’s Paraskevi Papahristou who won bronze with 14.15m.

She, too, had five fouls but the one that mattered, like Rojas in the second round, brought a dance of delight from the double European under-23 champion as she leaped out of the sand.

Europe took silver and bronze in the men’s event aswell.

It was a competition where China’s Bin Dong took the lead with a first round 17.18m and that would have been enough for gold, before he increased his distances with 17.29m in the third round and 17.33m in the fifth.

But Germany’s Max Hess, who is not 20 until July and is the world junior silver medallist, made second place his own with 17.14m, a distance he matched with his final jump.

It was enough to finish in front of European champion Benjamin Compaore, from France, who was third with 17.09m.