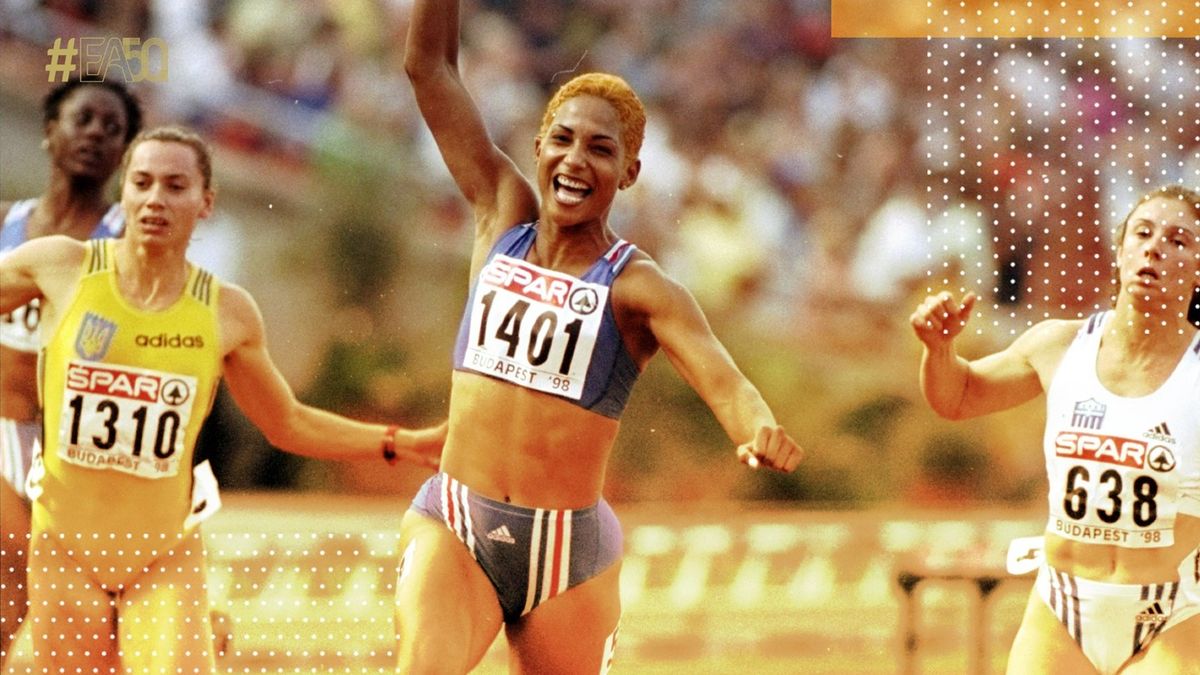 Christine Arron won two Olympic and five world medals in her esteemed career, including the 4x100m title at the 2003 World Championships in Paris, but her double triumph at the Budapest 1998 European Athletics Championships remains foremost among the Frenchwoman’s career achievements.

“Obviously there is Budapest,” reflected Arron in an interview with L’Equipe, casting back over her career. “It truly remains a great memory for me. I also broke the European record there so I did everything in one go. It seems such a long time ago but it also seems like it was yesterday.”

More than two decades have passed now since Arron produced that performance of the finest vintage at the Nepstadion. The Frenchwoman had broken the 11 second-barrier on seven occasions in the 100m prior to the 1998 European Championships and the strength of her season-long form put Arron in the ascendency to succeed Irina Privalova as the holder of the European title.

Arron eased through her heat in a relaxed 11.12 but her assault on the title was then momentarily put in some jeopardy. As Arron recalls, she arrived in the call room ahead of her semifinal with her spikes ready in her kit-bag but without her regulation bib number.

“I realised when I got to the call room for the semifinals in Budapest that I had forgotten my bib in my little bag where I had my spikes and my bottle of water. I was a little panicked. But the lady from the call room made one for me by hand and said to me, ‘Don't worry, you're going to win!’ It took my stress away,” she remembered.

This proved to be just a fleeting distraction for the gold medal favourite. Sporting a bib with a number which was hastily written in a black felt tip pen, Arron further embellished her title credentials in the semifinal by improving her lifetime best and French record by four-hundredths to 10.81, taking down Katrin Krabbe’s championship record of 10.89 in the process.

But an even more spectacular performance was to follow in the final only a few hours later. As expected, Arron ceded ground on renowned fast starters Ekaterini Thanou from Greece and reigning champion Privalova out of the blocks but the Frenchwoman was at her most majestic in the second half. Now in full flow and her legs turning over at top speed, Arron glided past Privalova in the last 30 metres and stretched all the way to the line, producing a performance which was spectacular both from an athletic as well as an aesthetic sense.

Cresting a 2.0 m/a tailwind, the clock initially stopped at 10.74 before Arron’s time was corrected to 10.73. Not only had Arron succeeded Privalova as the European champion, the Frenchwoman had also relieved the Russian of her European record - the previous mark of 10.77 being set in Lausanne in 1994.

This was also a performance which had a truly global significance as well. At the time, only two athletes - Americans Florence Griffith-Joyner (10.49) and Marion Jones (10.70) - had run faster and nearly 22 years later, Arron is still sixth on the world all-time list and remains the European record-holder.

But as magnificent as Arron was in the individual 100m, her performance in the 4x100m relay was arguably even more spectacular. Arron took hold of the baton in a distant third and - to the incredulity of all those watching - she proceeded to rocket past her German and Russian rivals to win her second gold medal of the championships. Her anchor leg was timed unofficially at a staggering 9.67 and is thought to be the fastest anchor leg in history.

Arron couldn’t quite rekindle that level of form on her farewell to international competition at the 2012 European Championships in Helsinki where she exited in the 100m heats and finished fifth in the 4x100m relay at the age of 38.

But in between Budapest and Helsinki, Arron picked up individual medals in the 100m and 200m at the World Championships as well as the 4x100m title in Paris. She also won bronze medals in the 4x100m relay at both the 2000 and 2004 Olympics.