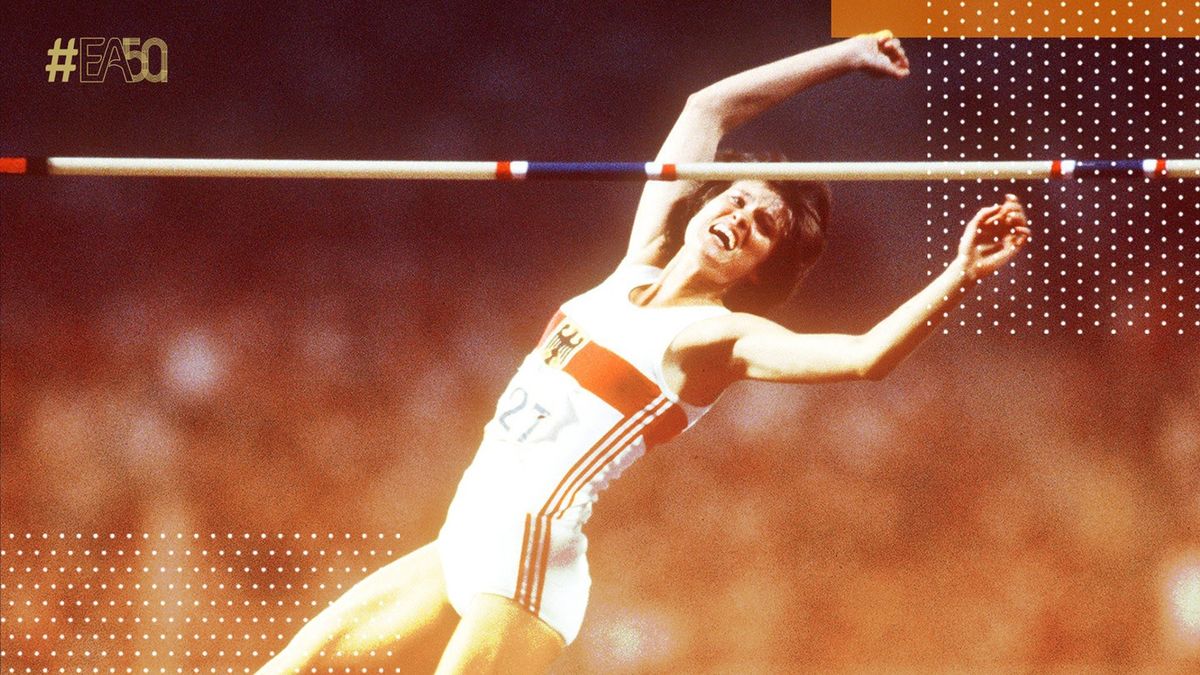 50 Golden Moments: Meyfarth on top of the world again in Athens

In an era when world records fell a little more regularly than they do today, 8 September 1982 was still an astonishing day by any standard as spectators in the Athens Olympic Stadium witnessed three world individual records at that’s year’s European Athletic Championships.

Earlier in the evening session, East Germany’s Marita Koch had sliced nearly half-a-second off her three-year-old world record in the 400m while the session was to finish with Great Britain’s Daley Thompson setting his second decathlon world record of that summer with a tally of 8743 points.

Sandwiched between them in a remarkable few hours of athletics, West German high jumper Ulrike Meyfarth cleared 2.02m to regain the world record, a full 10 centimetres higher and 10 years on from than when she had last held it as a 16-year-old teenager when she sensationally won the 1972 Munich Olympic Games gold medal if front of her home audience with a clearance of 1.92m a decade.

It was a remarkable comeback for Meyfarth, whom many had wondered in the intervening years whether she could ever claim a major title again.

Meyfarth, by her own admission, had struggled to cope with the attention and celebrity that came her way in the wake of her stunning performance in Munich and she finished only seventh at the 1974 European Championships before suffering the ignominy of failing to qualify for the final in Montreal in the defence of her Olympic title.

In 1977, she moved clubs from Koln to the famed Bayer Leverkusen, of which she is still a member today and changed coaches to Gerd Osenberg, who had worked with 1972 Olympic long jump champion Heide Rosendahl and was later to guide another Olympic champion Heike Henkel.

“In 1977, I just decided to start all over again and that’s what I did, Gerd wasn’t really a high jump coach, so we learnt together. It was a long road but by 1982 I was back on the international scene,” reflected Meyfarth.

Following a fifth place at the 1978 European Championships, the following year she took a bronze medal at the European Athletics Indoor Championships and silver at the World Student Games.

She might well have been a medal contender at the Moscow 1980 Olympic Games but for the West German boycott. However, – after almost a decade of East Germany’s Rosemary Ackermann and Italy’s Sara Simeoni taking top billing among the female high jump fraternity – she was on the top rung of the podium again at the 1981 IAAF World Cup and also won the 1982 European indoor title with what was then a national indoor record of 1.99m.

In Athens, the medallists had been decided when three women – Meyfarth, USSR’s Tamara Bykova and Simeoni, with the latter pair eventually being the silver and bronze medallists respectively – went clear at 1.97m.

However, Meyfarth continued her flawless record in the competition as the only one of the trio to go over 2.00m and equalling her West German record set in the national championships in Munich seven weeks earlier.

With the bar raised to 2.02m, Meyfarth brought it down twice but on her third attempt – her tenth jump of the competition and as dusk started to fall on the Greek capital on that late summer evening – she launched herself perfectly and flew clear with a superb jump, her torso several centimetres clear of the bar which was just tickled by the backs of her legs.

By going clear, she added one centimetre to the prevailing world record set by Simeoni at the previous European Championships in Prague four years earlier.

Meyfarth then had three unsuccessful attempts at 2.04m but found this height beyond her before the celebrations started with Meyfarth back on top of the world again.

Athens not to be Meyfarth’s last global superlative either.

The following summer, Meyfarth improved the world record again to 2.03m at the European Cup in London and while Bykova cleared the same height and was given a share of the world record it was the German who got maximum points for her country after clearing the world record with her first attempt.

The third and final world record of Meyfarth’s career and revenge after Bykova had beaten her to the inaugural world title in Helsinki two weeks before.

Her career was to be capped by a second Olympic gold medal 12 years after her first, in Los Angeles, and after being the youngest Olympic athletics champion in an individual event, an accolade she still holds, at that time in 1984 she was the oldest ever women’s Olympic high jump winner.