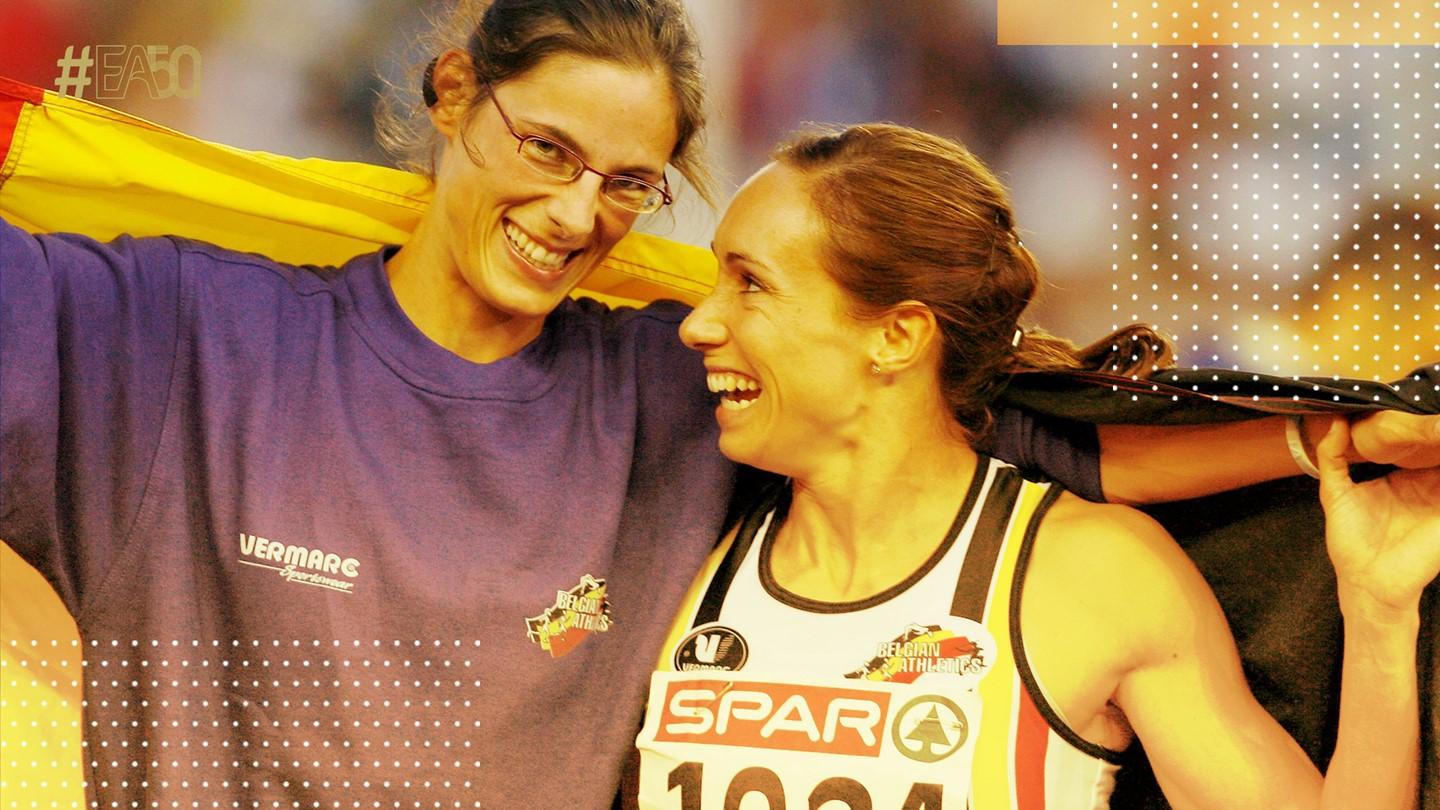 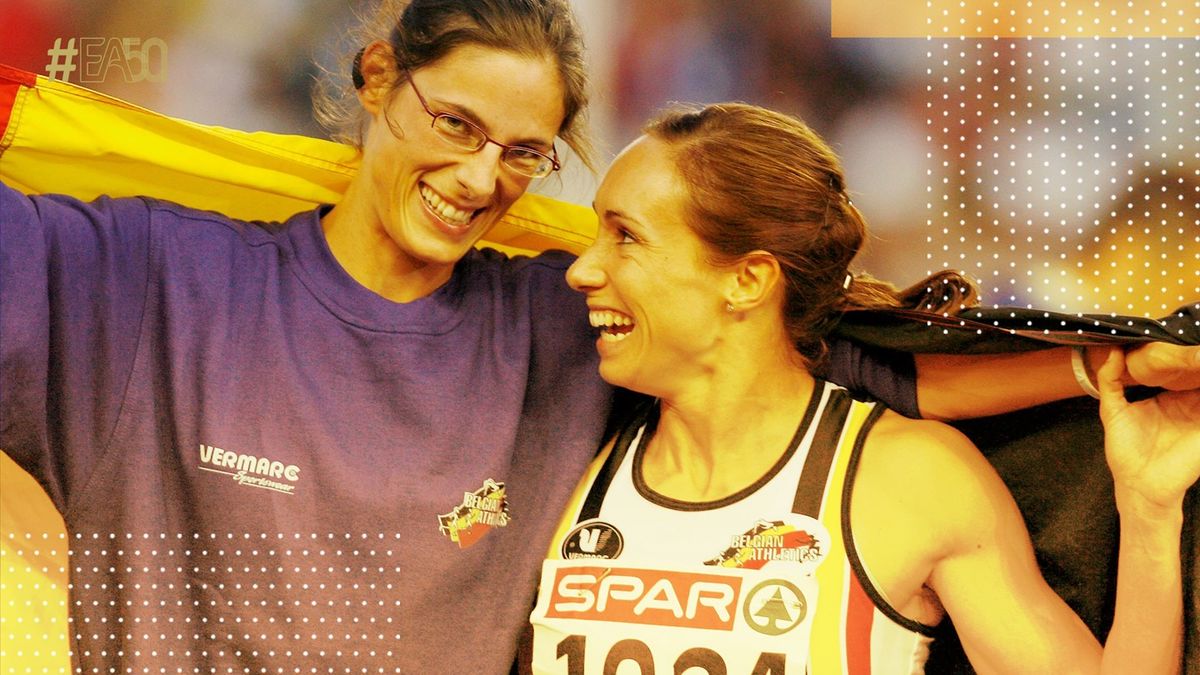 One of Belgium’s leading sports journalists described the fifth day of the Gothenburg 2006 European Athletics Championships as an “exciting but difficult evening for the Belgian press - right on deadline on a Friday when we usually close earlier!”

Following Gevaert’s victory in the 100m earlier in the week, that brought the Belgian total in Gothenburg to a heady three golds – astonishing, given that Belgium’s last victory at the championships had come in Helsinki 1971 when Karel Lismont won the marathon. 'At home, everybody is crazy because of my 100 gold medal,” said Gevaert after the 200m final. “I wonder what is going on right now in Belgium with three gold medals?”

Until Gothenburg, Belgium had only two European gold medals to its credit from the outdoor championships – the gold medal for Lismont, and the one won by Gaston Roelants in the 3000m steeplechase at the 1962 European Championships in Belgrade.

On the women’s side, the only European outdoor medals for Belgium were the two silvers earned by Gevaert in the 100m and 200m at the previous edition in Munich. Exciting indeed – not just for the Belgian press, but for European sport as well. Fourteen years on, both gold medallists vividly recall the events of that heady evening of 11 August.

Such was the programme on the night that the women’s high jump was entering its final stages as Gevaert and the rest of the 200m finalists assembled in the call room.

“I did the 100m, 200m and 4x100m in that championship and I think every sprinter will recognise that feeling of getting a little bit tired,” Gevaert recalled, speaking to European Athletics in a recent interview. “So for the 200m final I remember I was trying to get the energy that was left in my body together and to give 100 percent.

“And then I remember in the call room there was a little television screen and I saw Tia jumping, and doing what was the winning jump of 2.03m, and that gave me such a boost of positive energy and I am very sure that it helped me get over the fatigue that I had – so it definitely helped me.”

Hellebaut’s first-time clearance of 2.03m in one of the most high quality and enthralling high jump finals in championship history was her second national record of the evening. Her mark also displaced Ulrike Meyfarth’s championship record of 2.02m from the 1982 European Championships in Athens, at the time a world record.

Only one rival, Bulgaria’s Venelina Veneva, was able to clear it too – but only at the second attempt. So Belgium’s then 28-year-old former heptathlete stood to win on countback unless Veneva, or the two other stellar talents still involved, could rise to her challenge. They could not.

Those two talents were none less than Croatia’s Blanka Vlasic, who would go on to succeed Hellebaut by winning the 2010 European Championships, and reigning world and European champion Kajsa Bergqvist whose final in Gothenburg was dubbed in some quarters of the Swedish press as ‘Bergqvist’s Friday.’

“I was a big fan of Kajsa Bergqvist so it was kind of strange. Because in 2000 I woke up in the night to see her competition in Sydney. So it was a strange feeling that in her own country she was a big favourite and won the bronze medal. It is still a little bit sad that it happened.

“But for me it was the proof that I had made the right decision and I knew I had good chances the week before because I was in really good shape.”

With the feeling of victory still sinking in, Hellebaut – who like her long-standing friend and teammate Gevaert was born in 1978 – was moving towards the finish line on the track to watch her compatriot seek a second gold of the championships.

“It was kind of crazy because I was still overwhelmed that I had won the competition and then suddenly I saw that Kim was going to sprint so I was really, really excited,” she said. “I was thinking about how great it would be if we could do this together.

“I was there with the flag and I saw Kim getting into the starting blocks, and I was like: ‘Oh, she has to win! So we can win together!’

“For some reason at that moment I wasn’t even nervous because I knew she was going to win. She was the big favourite, and of course you still have to do it, but I was so convinced that there would be no problem and that she would win. I was standing there waiting so we could celebrate together.”

Hellebaut’s confidence was justified. Gevaert, having comfortably defeated major rival Yuliya Gushchina in the semifinal, made no mistake as she repeated that performance, clocking 22.68, with the Russian taking silver in 22.93.

“When I crossed the finish line I remember seeing Tia almost immediately afterwards and so it was a very special moment celebrating the two golden medals together. She was waiting, she had her sweater on already,” Gevaert recalled. “It was a great story because before those gold medals it was many years since Belgium had a win in the European Championship. Everybody was super, super happy - as if it was an Olympics, in fact.

“Coming home from those championships the Belgian people were so pleased with those medals and we got so much attention, so many things were organised! It really felt like a big thing.”

Hellebaut concurred. “It was a big thing,” she said. “It was a big boost for everybody in our country, I think. For a while we were the queens of Belgium, because we were not used to winning gold medals!

Two years on, these queens of Belgium provided further inspiration at the Beijing Olympics, from which both emerged with gold medals – even though, in Gevaert’s case, there was an eight-year hiatus after the Russians were retroactively disqualified after Yulia Chermoshanskaya failed a retest.

Recalling Beijing, Gevaert – who like Hellebaut is now a mother to four children – experiences a mix of emotions. The disappointment of missing her start in the 100m semifinals, and failing to make the final, remains with her.

“Becoming European champion for me was a very important thing, being able to win that medal at that point in my career,” she said. “The golden medal in the Olympics was a medal as part of a team, which created different emotions. It’s very difficult to live those emotions as a team.

“I still wish I had done a little bit better individually in Beijing. But, winning that medal – coming second in 2008 and then getting the gold eight years later, was great. Crossing the line in second place at the Olympics - we were so pleased to be able to do that.

“It felt like we won, because there was so much pressure on us - the team wasn’t doing very well until those last couple of days at the Olympics. It was a big relief that we had a medal and then the day after we had our podium ceremony and Tia was doing her high jump competition and we watched her win. I remember that whole week was a real rollercoaster of emotions.”