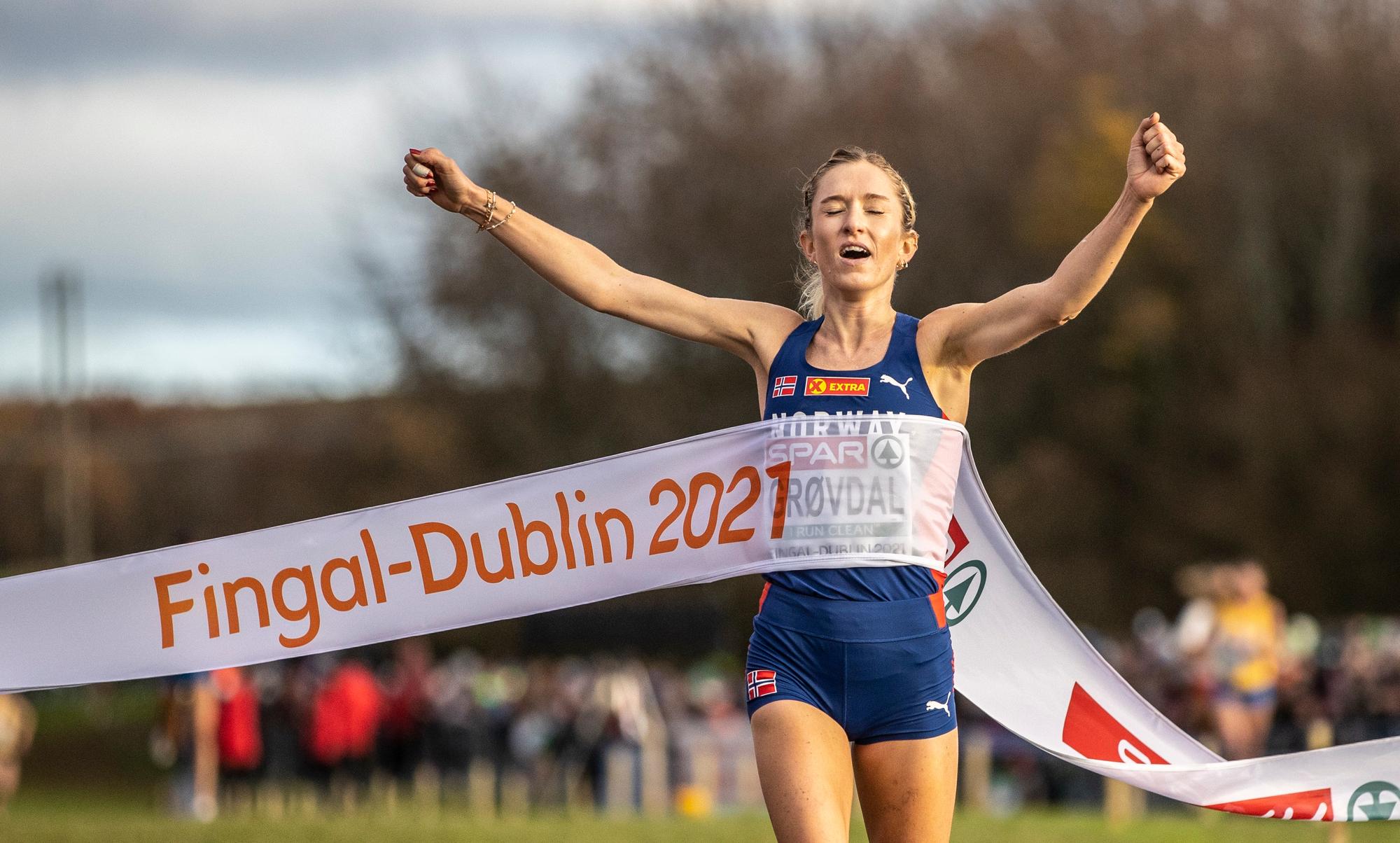 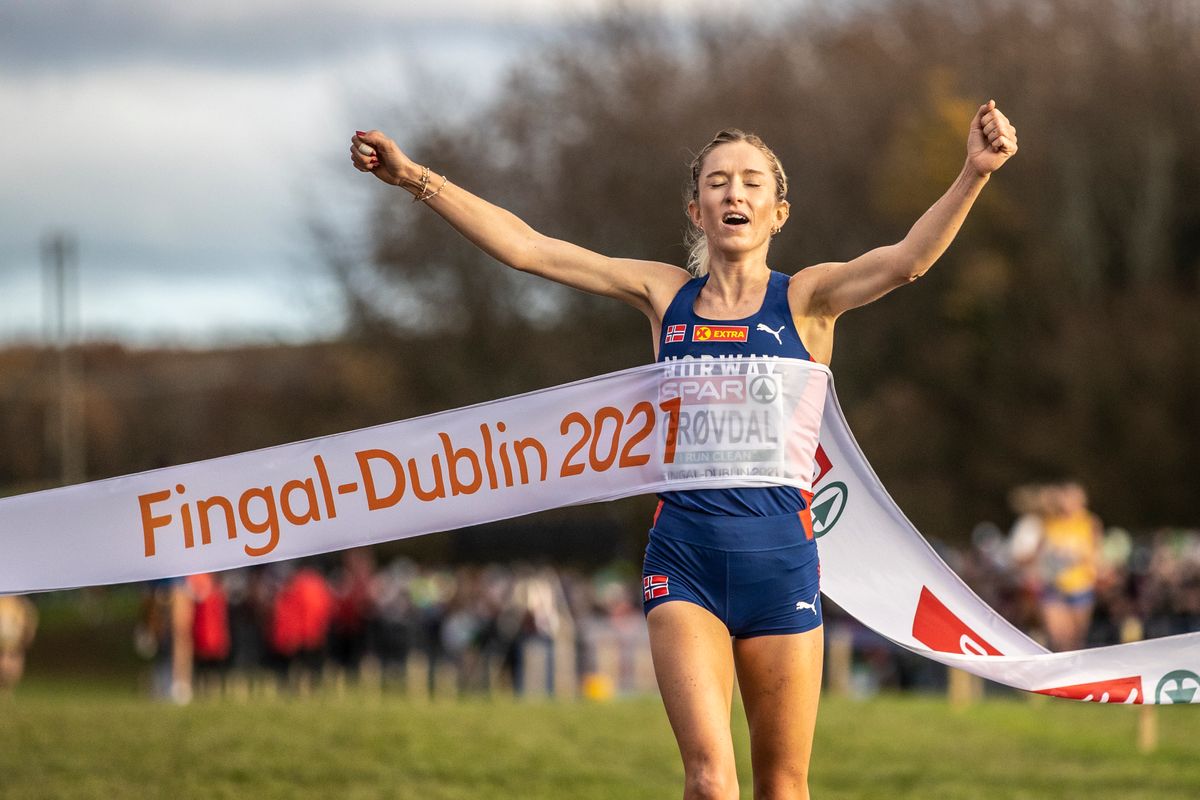 The last five editions of the SPAR European Cross Country Championships have seen Norway’s Karoline Bjerkeli Grovdal on the podium each time, but after four bronze medals and a silver, the latter two years ago in Lisbon, she finally struck gold in Fingal-Dublin on Sunday.

Into the bargain it was a winning return to the city where she won the U20 title 12 years ago in 2009, the last time Ireland staged these championships, and she made it a Norwegian double victory after Jakob Ingebrigtsen was victorious in the senior men’s race a little earlier in the afternoon.

The race started with Sweden’s Meraf Bahta and Germany’s Konstanze Klosterhalfen going straight to the fronbt and pushing the pace but they were soon joined by Turkey’s four-time defending champion Yasemin Can, Bahta’s compatriot and 2019 bronze medallist Samwarit Mengsteab, Israel’s Selamawit Teferi, as well as briefly France´s Mekdes Woldu.

Woldu soon lost contact with the leading group, but the five forged ahead and were together two kilometres into the race with Grovdal and Great Britain’s Jessica Judd 20 metres further back.

However, slowly over the next kilometre two critical things happen: firstly Grovdal got up with the leading group while, by contrast, Can – who was eventually to finish 14th – started to drift back, as did Mengsteab and Teferi albeit less dramatically.

By the fifth kilometre, with Klosterhalfen pushing the pace during the middle stages of the race, Grovdal was running comfortably on the shoulder of the German with Bahta also striding smoothly over the increasingly muddy circuit after six previous races.

About 40 metres behind the leading trio, Judd and Germany’s Alina Reh, with the latter having run a well-paced race up to this stage in the race, were lying in fourth and fifth place.

However, just before the sixth kilometre, the wheels suddenly came off for Klosterhalfen and the race for gold over the final two kilometres was down to a head-to-head battle between the Scandinavian pair of Bahta and Grovdal, the Swede herself a bronze medallist in 2014 and silver medallist in 2017.

The entertaining duel continued over much of the final lap although Bahta was starting to show signs of tiredness as her head bobbed from side-to-side and with 500 metres remaining Grovdal obviously sensed this was the moment to make a decisive surge and quickly pulled away from her last remaining rival.

Grovdal crossed the line after 8025m of running in 26:34, 10 seconds in front of the flagging Bahta with the fast-finishing Alina Reh motoring away from Judd in the final kilometre to take an unexpected bronze medal in 26:53.

The delighted but exhausted Norwegian immediately just sat down in the mud beyond the finishing line, getting her breath back and savouring her big moment after having come so close to gold so many times since 2015.

"I have won so many bronze and silver medals at European level - both on the track and in cross country - so for me to take the gold today means a lot. I am so happy for having been able to do that. It was not only until the last lap that I realised that I would be able to take the win," reflected Grovdal.

"I think the start wasn't easy, as I was a little behind, which made me feel a bit concerned, but then I slowly caught up with the girls leading the pack, that's also the reason I still had some energy left towards the end. I felt very relieved coming down the home stretch," she added.

Reh, the 2017 U23 champion, was more demonstratively overcome with emotion, tears streaming from her face after struggling with injuries for much of the year which saw her miss all of 2021, and her chance to go to the Olympics, until she returned to the roads in September.

Further down the field, Ireland's 2011 and 2012 champion Fionnaula McCormack finished ninth on her record 17th appearance at the Championships, her performance coming just a week after she ran 2:23:58 in the Valencia Marathon to go third on the 2021 European list for the classic distance.

Even though Judd just missed out on an individual medal, she got some compensation as she led Great Britain to the team gold medals, retaining the place at the top of the podium they achieved in Lisbon with Jennifer Nesbit and Jessica Gibbon in tenth and 11th place to complete their scoring trio in Fingal-Dublin and tally 25 points.

Great Britain also made it seven time in the last ten editions that they have won this title.

Reh added a team silver medal to her individual bronze, with Klosterhalfen finishing fifth: although there was an agonising wait for German cross country fans of almost two minutes after their leading pair crossed the line, counting down the places to see whether they could snatch the title from Great Britain, before Domenika Mayer finished 21st to confirm that they would finish in second place with 29 points for their best ever result in this category.

Like Reh, Bahta also got a second medal on Sunday as Sweden won their first ever senior women's team medal with 38 points, helped by Mengsteab hanging on to finish sixth.