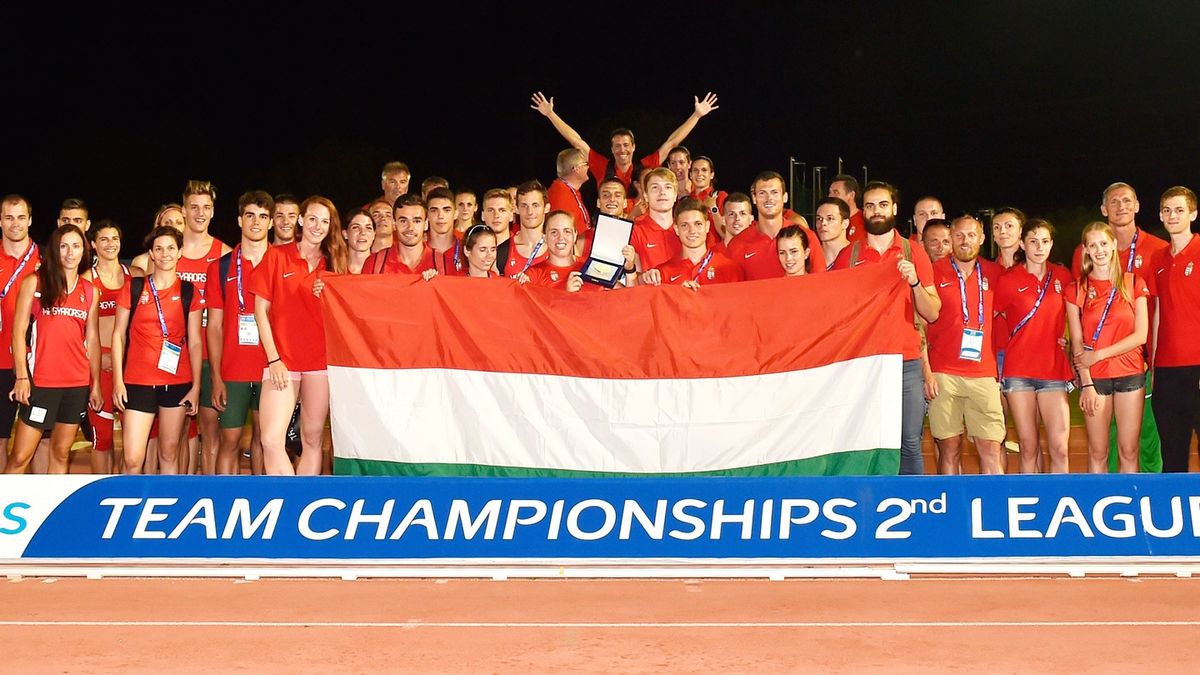 Hungary produced one of the great performances in European Athletics Team Championships history, winning the Second League in Tel Aviv, Israel by a thumping 66 points.

After finishing third in 2015, they now soar into the European Athletics Team Championships First League in style with 372.5 points.

They will be joined by Slovakia - who celebrate their second promotion in a row - runners-up with 306.5 points with Lithuania overcoming their relegation from two years ago with instant promotion by taking the third spot with 298.5 points.

Meanwhile, there was disappointment for Serbia (238.5), Iceland (181.5) and Moldova (168.5) who were all relegated into the European Athletics Team Championships Third League.

The pattern of the final outcome had been set on the opening day which finished with the positions of those five nations exactly as they were at the end of the competition.

With a score of 195 points, Hungary were the healthy overnight leaders from Slovakia (171) and Lithuania (157). At the other end of the table, Iceland were second from bottom with 107 points in the table propped up Moldova (88) who had also won promotion in 2015.

It had been Moldova who set the early standard by winning the first event of the programme courtesy of Serghei Marghiev in the hammer. He threw 73.37m to beat Slovakia’s Marcel Lomnicky (73.26m) and Hungary’s world and European U20 champion Bence Halasz (72.87m).

But Hungary’s strength throughout really showed with the team banking eight wins, nine second places and six third places. The overnight position had brought delight for Marton Gyulai, the general secretary of the Hungarian Athletics Federation, who tweeted: “Proud to see @magyaratletika leading after day 1.”

He would have been prouder still as they duly went on to clinch promotion. On that first day, Hungary scored wins in the men’s 400m hurdles with Tibor Koroknai setting a personal best of 49.74 and in the women’s 3000m steeplechase with Zita Kacser clocking 10:06:80 before both their sprint relay teams triumphed in the 4x100m.

These successes were followed up with further twelve points in the 3000m for Benjamin Kovacs (8:07.25), Krisztina Papp in the 5000m (16:17.99), and Greta Kerekes in the 100m hurdles (13.17) while one of the country’s biggest athletics names, Anita Marton delivered 23 points to Hungary’s impressive tally.

In the discus on Saturday, Serbia’s Dragana Tomasevic proved too good as she won with 59.47m from Marton (55.55m) but the Olympic shot put bronze medallist made the event her own on Sunday, taking first place with 18.09m.

However, there was something of a shock in the men’s 110m hurdles. Hungary’s Balazs Baji, the European silver medallist who has lowered his national record to 13.24 this season, was beaten by Olympic finalist Milan Trajkovic from Cyprus - 13.31 to 13.39 - with Serbia’s Milan Ristic third in a high quality race in 13.49.

In Hanna Minenko, Israel has one of the world’s best triple jumpers and the world and European silver medallist gave the home side much to cheer about as she won with 14.17m from Lithuania’s Dovile Dzindzaletaite (13.97m) and Slovakia’s Dana Veldakova (13.66m).

The women’s javelin was always going to be one of the big events due to the appearance of Croatia’s Olympic champion Sara Kolak and how dramatic it proved to be.

Kolak led after the first round with 59.51m but Iceland’s Asdis Hjalmsdottir took over with 60.67m. It looked as though Kolak was going to be toppled as she only managed 59.50m in the penultimate round but the Olympic champion saved her best for the last round, throwing 61.06m as Slovenia’s Martina Ratej hit 60.64m to finish third.

The men’s javelin was also a high quality competition with Moldova’s Andrian Mardare, 21, improving his national record for the fourth time in as many competitions this year with his opening round throw of 83.93m to win ahead of Lithuania’s Edis Matusevicius.

After her 800m and 1500m double in Stara Zagora in 2015, Serbian Amela Terzic was once more in great form as she completed another double. She brought Serbia twelve points on Saturday when she won the 3000m in 9:15.85 before taking the 1500m - her specialist event - the following day in 4:15.93. With Terzic absent from the 800m, Iceland’s Anita Hinriksdottir lived up to her billing, winning in 2:02.57

Volko was Slovakia’s only male winner but they had a trio of victories in the women’s events: Iveta Putalova won the 400m in 52.45 and helped Slovakia to victory in the 4x400m in 3:34.05 while veteran Jana Veldakova won the long jump with 6.55m.

And while Lithuania earned promotion, there was defeat for Europe’s top-ranked discus thrower Andrius Gudzius by Austrian Lukas Weisshaidinger, who was sixth at last summer’s Olympic Games in Rio.

Gudzius led from round one with 65.21m as Weisshaidinger threw 64.92m but then it all changed in the fifth round as the Austrian reached 65.66m to secure maximum points, a vital contribution as Austria just avoided relegation by two points.