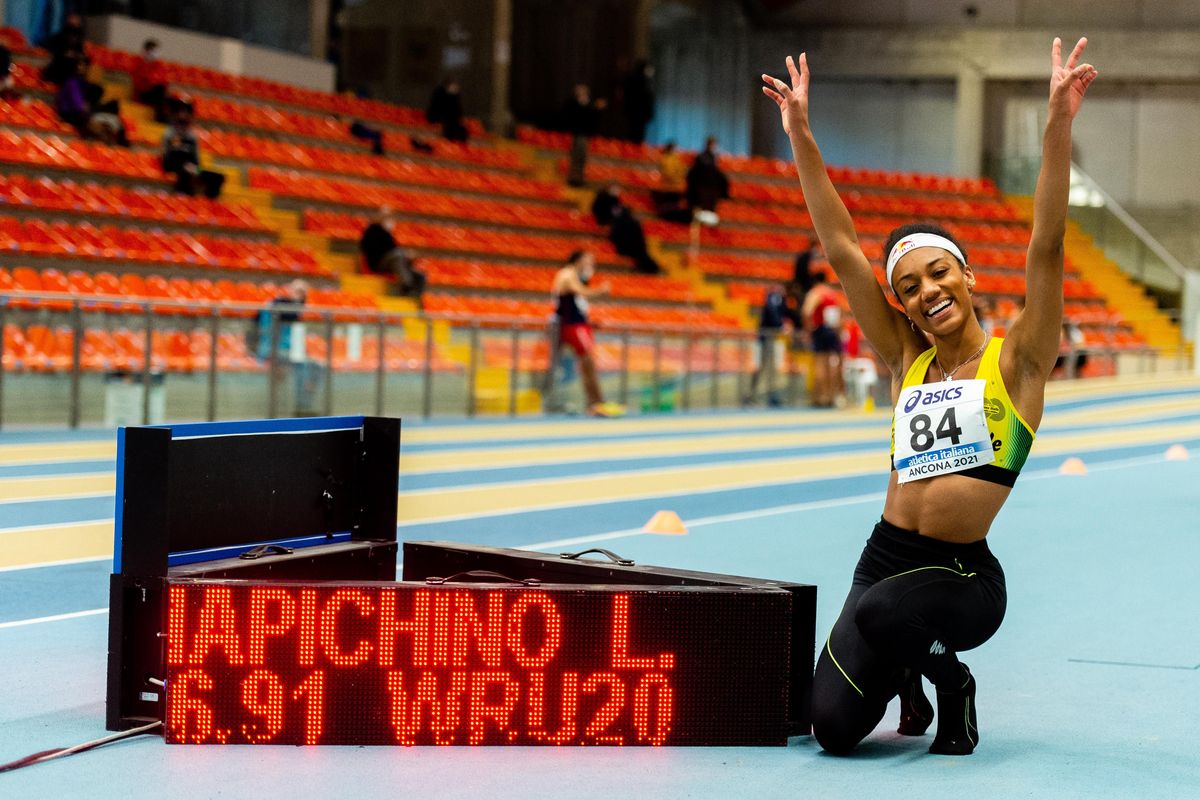 Iapichino 6.91m and Tamberi 2.35m at the Italian Indoor Championships

With two world long jump titles to her credit, Fiona May is rightly considered to be one of the greatest Italian athletes in history but her precocious 18-year-old daughter Larissa Iapichino is already matching the sizeable achievements achieved by her mother.

Iapichino equalled May’s domestic record and she surpassed the world indoor U20 record held by another doyen of the event, adding three centimetres to Heike Drechsler’s mark of 6.88m which dated back to 1983 in terms of antiquity. Drechsler commented on Instagram: “That is a very great result! She jumps just like her mom Fiona May.”

With the Torun 2021 European Athletics Indoor Championships less than a fortnight away, Iapichino climbs to the top of the 2021 world list and her mark of 6.91m is also a qualifying mark for the Olympic Games in Tokyo this summer. Like May, Iapichino looks destined to make her Olympic debut as a teenager.

“Surreal, a dream, I have no words to describe it. The first thing I thought was: man, I jumped like my mum! Only later did I realise that 6.91m is also the world U20 record and that it is the standard for Tokyo! It will take a while to realise what happened today,” Iapichino told FIDAL after the competition.

Reigning European indoor champion Gianmarco Tamberi provided the highlight of the second day of the Italian Indoor Championships by claiming the outright world lead in the high jump with a 2.35m clearance.

Tamberi previously held a share of the world lead after clearing 2.34m at the Copernicus Cup in Torun but while he required third-time attempts at 2.25m and 2.34m midweek, Tamberi delivered a flawless performance in Ancona. He cleared every height between 2.16m and 2.35m on his first attempts before bowing out at a prospective national indoor record of 2.38m.

Tamberi’s 2.34m and 2.35m clearances over the last seven days are his best performances since he made his comeback from a potentially career threatening ankle injury on the eve of the Olympic Games in 2016.

He told FIDAL: “They were very difficult years and today's performance means that we have closed that parenthesis. I became the athlete I wanted to be after the injury. And I feel I have to take the satisfaction I've been looking for so long.

“The European Indoor Championships? I am not satisfied with an Italian Championships which still has great value: the Europeans are a fundamental step that must not be missed on the road to Tokyo.”

There was another significant performance in the heptathlon from 20-year-old Dario Dester who became the first Italian combined eventer in history to surpass the 6000 points-barrier in the heptathlon.

Dester also gave credit to Cairoli for helping him to achieve the record. “They were two unforgettable days. Simone and I fought point by point, event after event. It was spectacular and we enjoyed it, and we hope we have made all the Italians appreciate the combined events.”