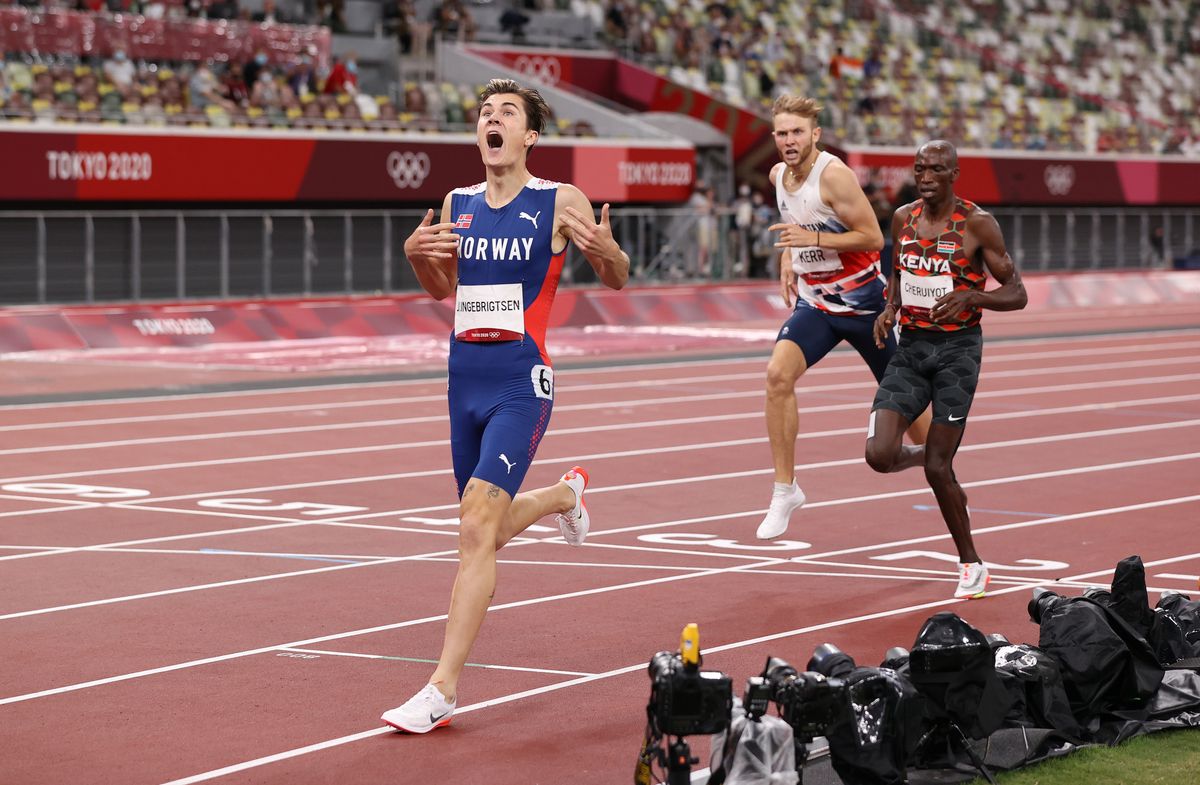 Jakob Ingebrigtsen had never beaten Kenya’s Timothy Cheruiyot before but the Norwegian turned the tables on the world champion on the biggest stage of all, gliding to the 1500m title in an Olympic record and European record of 3:28.32.

This was one of three gold medals for Europe on the last day of track and field at the Olympic Games and Norway’s second of the championships after Karsten Warholm’s earth shattering victory and world record in the 400m hurdles.

The final played out similarly to the women’s 1500m final with the leading protagonists keen to dictate the pace. In a tonic to the traditional slow and tactical finals of major championships gone by, Ingebrigtsen and Cheruiyot traded the lead throughout and a first ever sub-3:30 winning time at the Olympic Games seemed on the cards.

Cheruiyot led into the last lap but Ingebrigtsen, who was clearly back at full fitness after an untimely bout of illness in the middle of the season, was no more than a pace behind the Kenyan with the distinctive forward lean. And with around 150 metres remaining, Ingebrigtsen smoothly passed the Kenyan before going through an array of gears in the home straight to triumphantly seal the title.

"This is what you want as a professional runner," Ingebrigtsen said. "I’ve been able to do it on my first try and I feel like I am just getting started. But at the same time, I have been dreaming of this for my whole life."

Ingebrigtsen crossed the finish-line with a wondrous, awestruck expression on his face but in the end, the outcome wasn’t close. The 20-year-old from Sandnes won by nearly a second from Cheruiyot (3:29.01) with Brit Josh Kerr closing up quickly to take the bronze medal - and very nearly the silver - in 3:29.05, a rather unlikely result based on the heats in which Kerr only qualified on time.

Kenya’s Abel Kipsang was fourth in 3:29.56 while Spain’s former European indoor champion Adel Mechaal made brilliant progress on the last lap to finish fifth in a lifetime best of 3:30.77.

In the most brutal of encounters around 25 laps of the track, Sifan Hassan dug deep into her reserves to conclude her exhausting Olympic campaign with gold in the 10,000m.

This was Hassan’s sixth race of the Olympics having already won the 5000m title before having to settle for bronze in last night’s high-octane 1500m final which saw Faith Kipyegon successfully defend her Olympic title.

In the 10,000m, Hassan would go head-to-head with another of her redoubtable rivals Letesenbet Gidey from Ethiopia who took ownership of the world 10,000m record just two days after Hassan initially broke Almaz Ayana’s record in Hengelo.

The stultifying heat and humidity were not conducive to employing front running tactics but Gidey ploughed out the pace in uncooperative conditions knowing Hassan had outsprinted her for the 2019 world title and had to be running on tired legs after her dizzying and unprecedented exploits of the previous ten days.

Gidey ground out a series of 70-71 second laps but Hassan weathered this attritional pace, sticking to Gidey like a limpet. And when Gidey started to slow in the last three laps, the odds began to swing even more heavily in Hassan’s favour.

Gidey had the near-impossible task of keeping Hassan at bay on the last lap and the Dutchwoman swept past the flagging leader on the final bend and was now en route for her second gold medal. An exhausted Gidey was overhauled for the silver medal by Bahrain’s Kalkidan Gezahegne as the three medallists all broke the 30 minute-barrier.

Hassan has appeared indefitable at times at these Olympic Games and that no sort of racing schedule would catch up with her. But the Dutchwoman cut a picture of exhaustion at the end of the 10,000m as she crumpled onto the track, writhing in pain and requiring some medical attention.

But her exertions were richly rewarded as she comes away with gold medals in the 5000m and 10,000m as well as a bronze medal in the 1500m, becoming the first female athlete since Heike Drechsler since 1988 to win three individual medals at the same Olympics. Hassan also becomes just the second woman in history to win a 5000/10,000m double at the Olympic Games after Ethiopia’s Tirunesh Dibaba in 2008.