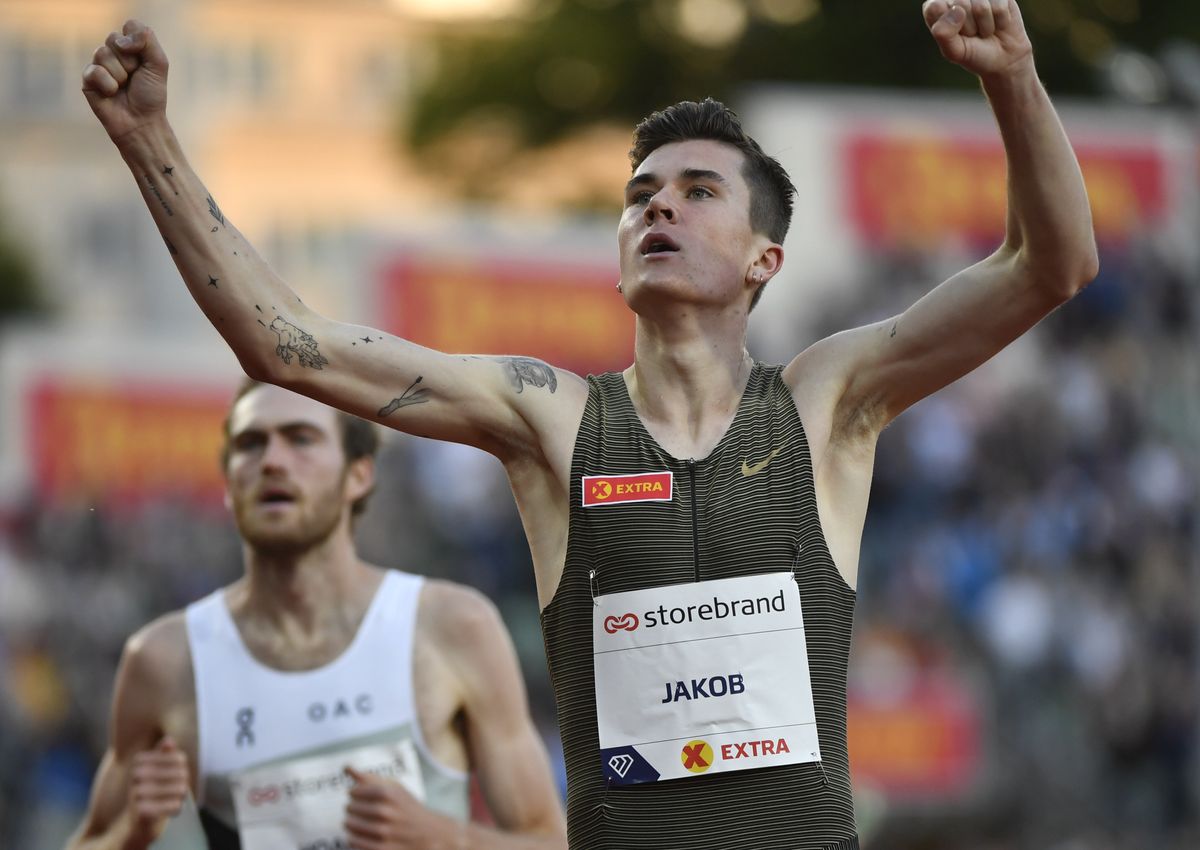 Ingebrigtsen storms to a 3:46.46 mile to close the show in Oslo

Olympic champion Jakob Ingebrigtsen closed the show at the Oslo Diamond League by becoming the first ever Norwegian winner of the Dream Mile in front of a near capacity crowd on Thursday (16) evening.

The long-standing European record of 3:46.32 that Ingebrigtsen was targeting narrowly escaped the clutches of the precocious Norwegian but his winning time of 3:46.46 still achieved all sorts of superlatives.

Not only was it a national record and a Diamond League record, it was also the world’s fastest time by more than 20 years. His winning time also puts Ingebrigtsen at sixth on the world all-time list which is still headed by Hicham El Guerrouj’s world record of 3:43.13.

Ingebrigtsen needed a 57 second last lap to surpass Steve Cram’s record which was set in the Bislett Stadium in 1985 but despite being pushed by Oliver Hoare - who was rewarded with an Oceanian record of 3:47.48 - and cheered by a raucous crowd, the Norwegian couldn’t quite propel himself ahead of the wavelights that were set for European record pace.

But Ingebrigtsen was still more than pleased to make history by becoming the first Norwegian winner of a race which has been graced by all of the middle distance greats in decades gone by.

“Oslo is always perfect and for me; it's the best meeting in the world so it was an awesome experience. Last year I was sick so couldn't race here so it was even more special here tonight, as was to be the first Norwegian to win the Dream Mile - doing things nobody else has before is really great,” he said.

Not content to share the victory with home favourite Sondre Guttormsen, Armand Duplantis defied the deteriorating conditions to take the outright victory in the pole vault with a third-time clearance in 5.92m.

Luckily the rain started to abate and the world record-holder had the appetite to go even higher. Duplantis ameliorated his meeting record and world lead by one centimetre with a 6.02m clearance - his ninth six metre-plus competition of the season already - before departing from the contest after two tired attempts at 6.10m.

“I felt good jumping despite it being a hectic day with the rain coming on and off - it was tiring coping with that but I'm happy with 6.02m but it was too long a competition for my legs so I ran out of steam, but the energy from the crowd was good, they helped a lot. It was cold but it wasn't so bad under the circumstances,” said Duplantis.

In the 400m hurdles, Femke Bol streaked to yet another victory and the Olympic bronze medallist stopped the clock at 52.61 to win by an astonishing winning margin from Ukraine’s Hanna Ryzhykova (54.81) and Brit Jessie Knight (54.84).

Bol’s time was the fourth fastest time in history by a European - only Bol herself and former world record-holder Yuliya Pechonkina have ever run faster - even though by her own admission she stuttered coming into the tenth hurdle.

“It means a lot to take the meeting record, next I will do the national trials and get ready for the World Championships, and then try to come back well for the European Championships, so it's going to be a really busy summer but I'm ready for the challenge - I want to keep running fast and get some medals,” she said.

Sandra Perkovic took her 45th Diamond League career victory with 66.82m in the discus, Miltiadis Tentoglou won the long jump with 8.10m and there were also victories on the track for Ida Karstoft who set a Danish record of 22.73 in the 200m and for Keely Hodgkinson who won the 800m in 1:57.71 ahead of Laura Muir in 1:58.09.

There was also a significant national record for Karoline Bjerkeli Grovdal. The reigning European cross country champion took up the running midway through the 5000m and she was rewarded with a fourth-place finish in 14:31.07 to break Ingrid Kristiansen’s long-standing Norwegian record of 14:37.33.