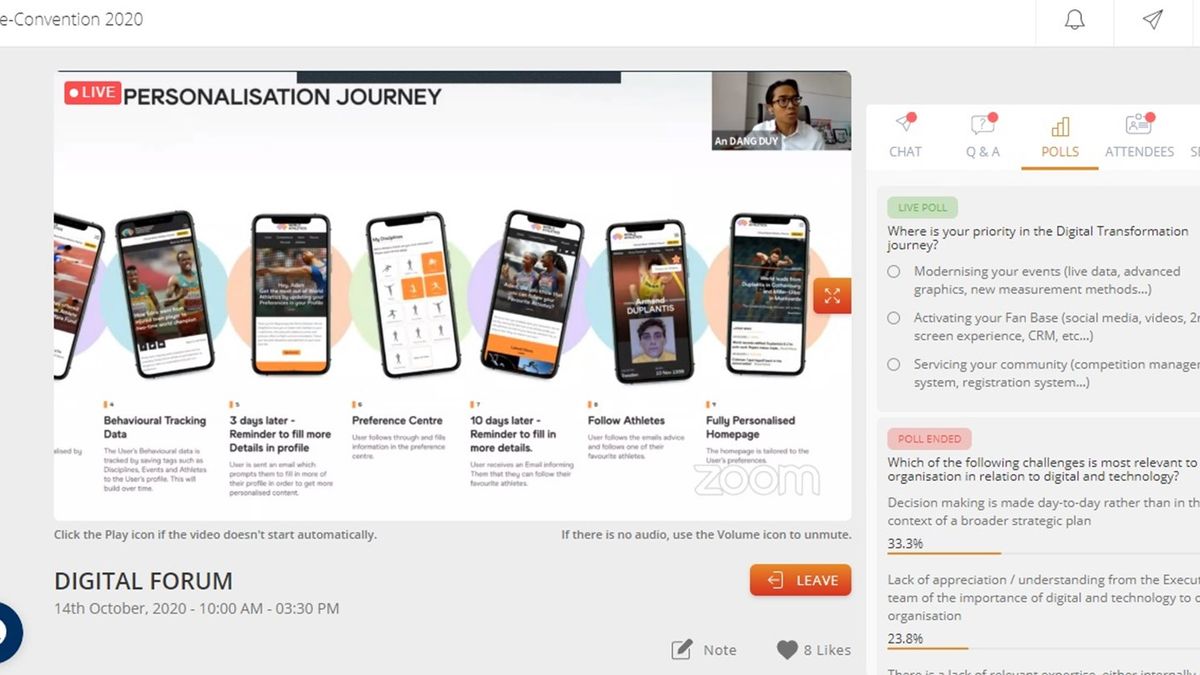 The opening day of the 2020 European Athletics e-Convention saw more than 100 participants connect from all parts of the continent and get involved in the first ever Digital Forum on Wednesday (14).

The successor to the previous AthTech events that had been hosted by European Athletics and held as standalone in-person conferences, the online Forum – appropriately, considering the subject matter, using state-of-the-art interactive conferencing software – brought together technology experts within the athletics family and an engaged audience drawn predominantly from European Athletics Member Federation officials.

After an introduction by the moderator and European Athletics Head of Digital and Data Nicolas Launois, the morning session saw opening presentations from John de Carvalho, Adam Pitt and Ben Precious of the PMY Group – one of the world’s leading sport and entertainment technology advisors – looking at the digital maturity of European Athletics Member Federations.

In simple terms, digital maturity has taken over from the vaguely understood and often badly used phrase ‘digital transformation’ as a way of describing how organisations respond appropriately to changes in a digitally competitive environment and how they, or often how they don’t, leverage technology to achieve overall strategic goals in a quicker, efficient and more cost-effective manner.

Bram van der Lelj and Ferry van Dipten of the Dutch athletics federation than came into the presentations from the PMY Group to give a case study of how consultancy had helped change for the better the federation’s digital functions and methods, especially in the area of competition management.

The 1st session of the Digital Forum at the @EuroAthletics e-Convention has come to an end...100+ participants.

To finish the morning session, World Athletics Chief Information Officer An Dang Duy showed what the sport’s global governing body were working on with respect to digital innovations, especially in the area of using data to enhance TV graphics and thus increase fan engagement.

He also described some of the technology-related areas where World Athletics and European Athletics are co-operating and looking to find synergies and complementary solutions.

The second session saw German de la Torre and Antonio Seoane from European Athletics’ timing systems provider Atos take the virtual stage with the opening presentation, predominantly looking at how data from timing systems can be integrated into cost-conscious ‘Lite Production’ methods and then distributed via various platforms such as social media and video streaming.

Atos were followed by European Athletics Statistician Mirko Jalava, who expanded on the methodologies and software techniques that his company Tilastopaja was using that then allowed much easier result manipulation, display and distribution.

Thank you @EuroAthletics. It was a pleasure to share some time and insights with the whole athletic family this morning during the e-Covention! #teamAtos #loveathletics https://t.co/AT49owrbFN

Andy Robinson of OpenTrack described the role of open source software and his vision of a ‘shared data hub’ in data collection and competition management with the aim of improving the integration of data in athletics through having open standards, as well as looking at some of the improvements that have been made in recent years, especially in results capture.

Christian Birk, founder and CEO of the technology company Roster Athletics, showed what his company had developed in terms of a streamlined competition management platform that brings is designed to bring together event organisers and athletics fans through an innovative cloud platform and mobile applications.

Finally, Duje Bonacci of Trackmeetings.info provided a thought-provoking presentation on how his company was developing an interactive and easily searchable calendar app for athletics meetings – something many participants reflected via the chat function of the e-Convention platform was currently missing and would be of considerable benefit – that could be used by all stakeholders in the sport but especially by athletes trying to plan their competitions.

In addition, throughout both sessions, interactive polls were undertaken to assess Member Federations’ attitudes, awareness and adaption relating to digital issues and solutions as they impacted on themselves and, more widely, on our sport.