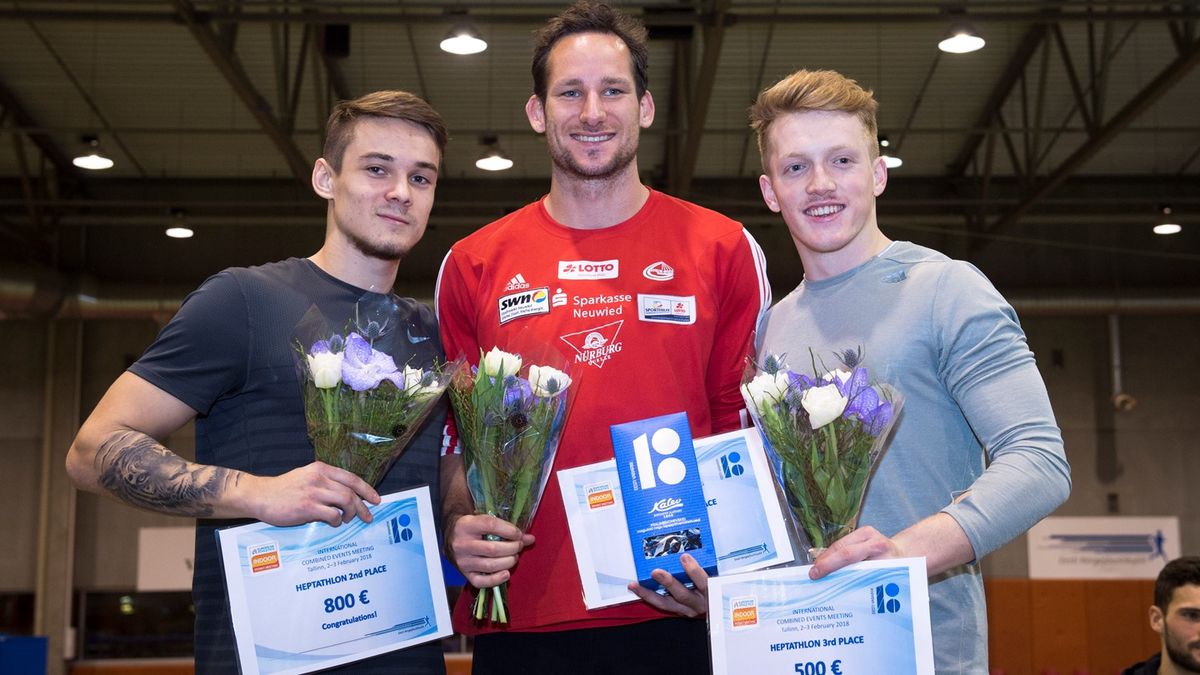 Kazmirek reels in Hausenberg to claim the plaudits in Tallinn

He might have been over 200 points shy of his personal best but Germany’s Kai Kazmirek showed at the Tallinn Indoor Meeting, a European Athletics Indoor Permit Meeting, on 2-3 February that he is warming up nicely for what could be a very big year for him.

The world decathlon bronze medallist scored 5903 points as he won the heptathlon in the Estonian capital courtesy of a strong performance in the 1000m as Ukraine’s European U20 heptathlon champion Alina Shukh won the pentathlon with 4375 points.

With the days ticking away until Berlin stages the first multisport European Championships in August in conjunction with Glasgow, Kazmirek knows he can become one of the major home stars in the Olympic Stadium in August.

It is all about the build-up, earning important wins along the way, and that is just what he did in Tallinn as he triumphed by 99 points from 19-year-old Hans-Christian Hausenberg, who secured the Estonian title in second. German teammate Manuel Eitel was third with 5802 points.

In the end it all came down to the final discipline - the 1000m - and Kazmirek’s strength during the five laps proved enough as he recorded a time of 2:46.99 to overhaul Hausenberg who could only manage 3:08.25.

With his personal best of 6173 going back to 2014, he will know there is for improvement but this is a fine base towards the IAAF World Indoor Championships Birmingham where will face France’s reigning world decathlon champion Kevin Mayer.

Kazmirek was not even in the top three after the first day, ending it in fourth with 3282 points, as Eitel led with 3341 from Estonians Hausenberg (3325 points) and Karel Tilga (3301 points). But on Saturday Kazmirek edged his way towards the top before securing his win when it mattered most.

It was in this meeting last year that Shukh, 18, produced a world indoor U20 pentathlon record of 4542 points and while she was not near that record on Saturday with 4375 points, Shukh showed she remains a brilliant talent at any age group.

Shukh was involved in one of the duels of 2017 when she beat Switzerland's Geraldine Ruckstuhl by just 24 points to win heptathlon gold at the European Athletics U20 Championships.

Her margin was wider one this occasion as Shukh defeated German Mareike Arndt (4235 points) and Sweden´s Bianca Salming (4234 points) while Kate O’Connor, 17, was fourth with an Irish senior record of 4150 points.

For once at the RIG Games in Reykjavik, a European Athletics Indoor Permit meeting, on Saturday (3) Iceland’s Anita Hinriksdottir was not the star of the show.

The honours this time went to Swedes Odain Rose and Maja Nilsson and Great Britain’s Diani Walker who all broke Games records.

Rose and Walker both achieved theirs in the 60m semifinals before going on to take the win in the final. Rose ran 6.72 in his semifinal and then matched the mark in the final, beating Denmark’s Festus Assante (6.79).

Walker won her semifinal in 7.44 and sprinted to victory in the final in 7.46 from Denmark’s Mathilde Kramer in 7.51.

Nilsson, 18, wrote her name into the event’s history as she won the high jump with 1.87m before failing three times at 1.90m.

But in the 800m, there was a surprise defeat for Hinriksdottir, who had won at the last six editions of the meeting. The European indoor bronze medallist had to settle for second, beaten narrowly by Kenya’s Emily Cherotich, 2:02.39 to 2:02.68.