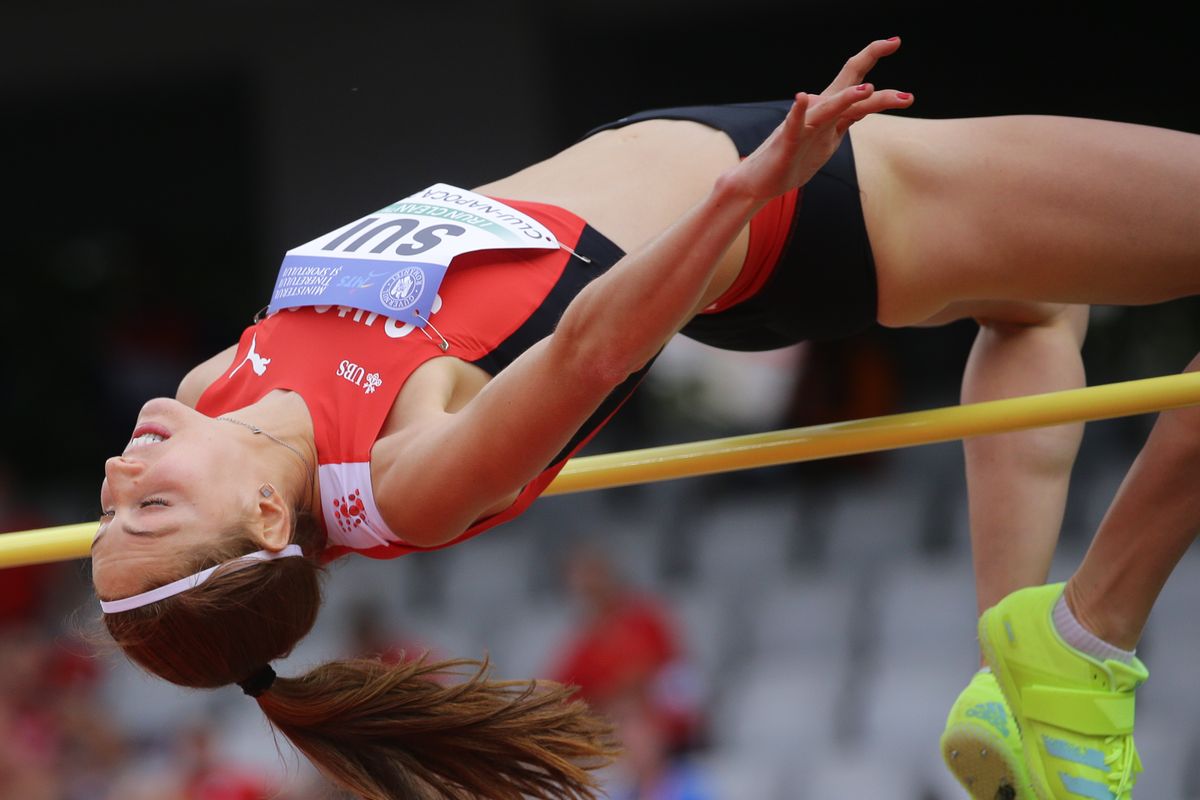 Langenthal and Smederevo are around 1300 kilometres apart, but Switzerland’s Salome Lang and Montenegro’s Marija Vukovic both cleared the same height of 1.97m at their respective competitions more-or-less at the same time to improve their own national high jump records on Sunday (27)

Lang – who had improved her personal best to a national record height of 1.96m when winning at the European Athletics Team Championships First League a week ago – provided the highlight of the Swiss Championships when she added another centimetre to that mark with her third time clearance at 1.97m before failing three times at 2.00m.

Vukovic, the 2010 world U20 champion, added two centimetres to her previous record of 1.95m from 2016 to win her first Balkan Championships title and clinch, and book her place to the Olympic Games.

Other standout performances from Smederevo, about 50km from the Serbian capital Belgrade, included Hanna Skydan, from Azerbaijan, winning the hammer with 71.18m, Turkey’s Emel Dereli taking the shot put tile with 18.41m, just 16cem short of her national record, and Romania’s Florentina Iusco jumping 6.65m to claim victory from Serbia’s Milica Gardasevic, who was second with 6.61m.

In the men’s events, among the gold medallists were Greece’s Emmanouil Karalis, who cleared 5.70m in pole vault, and his compatriot Nikolaos Andrikopoulos won the triple jump with16.73m while Montenegrin discus thrower Danijel Furtula sent his implement out to 62.96m to claim victory.

The final day of the British championships in Manchester on Sunday also provided a plethora of good performances.

Reigning European indoor champion Keely Hodginkson won the 800m in 1:59.61while in a thrilling finale to the men’s event over two laps of the track, just three-hundredths covered the first three men home with first Elliot Giles winning in 1:45.11, Oliver Dustin second in 1:45.12 and Daniel Rowden third in 1:45.14.

On the last day of the French Championships in Angers, 20-year-old pole vaulter Ethan Cormont caused an upset as he defeated the venerable Renaud Lavillenie as both men cleared 5.70m before failing at 5.80m, but three attempts to get over 5.55m cost Lavillenie dearly.

Liemarvin Bonevacia became the first European to run under 45 seconds for one lap of the track at the Dutch Championships in Breda when he improved his European lead to 44.99 to win the 400m, finishing just ahead of Jochem Dobber who was second in a personal best of 45.07.

Across the Iberian peninsula, there was some good triple jumping with 2019 European indoor champion Ana Peleteiro winning her specialist event when she produced a Spanish outdoor best of 14.61m at the Spanish Championships in the Madrid suburb of Getafe, the second best legal distance by a European this year, while across the border at the Portuguese championships in Maia, Patricia Mamona bounded out to a windy mark of 14.75 (+4.0) and legal championship record 14.55 (+1.8), just 10cm short of her national record.

On the last day of the Italian Championships in Roverto, Dariya Derkach took the women's triple jump title with 14.47m and Tobia Bocchi became the third Italian man to jump more than 17 metres this year when he won the men's title with a personal best of 17.14m.

Alessandro Sibilio won the 400m hurdles in 48.96, the fastest time by an Italian since 2005, and Eleonora Marchiando also set a big lifetime best of 55.16 to win the women's 400m hurdles.

At the Slovak Championships in Trnava, Marcel Lomnicky won the hammer with 79.19m to improve his personal best which had stood since 2014 by three centimetres while 21-year-old Emma Zapletalova – a possible medal contender at next month’s European Athletics U23 Championships in Tallinn, Estonia – clocked 55.49 win in the 400m hurdles,