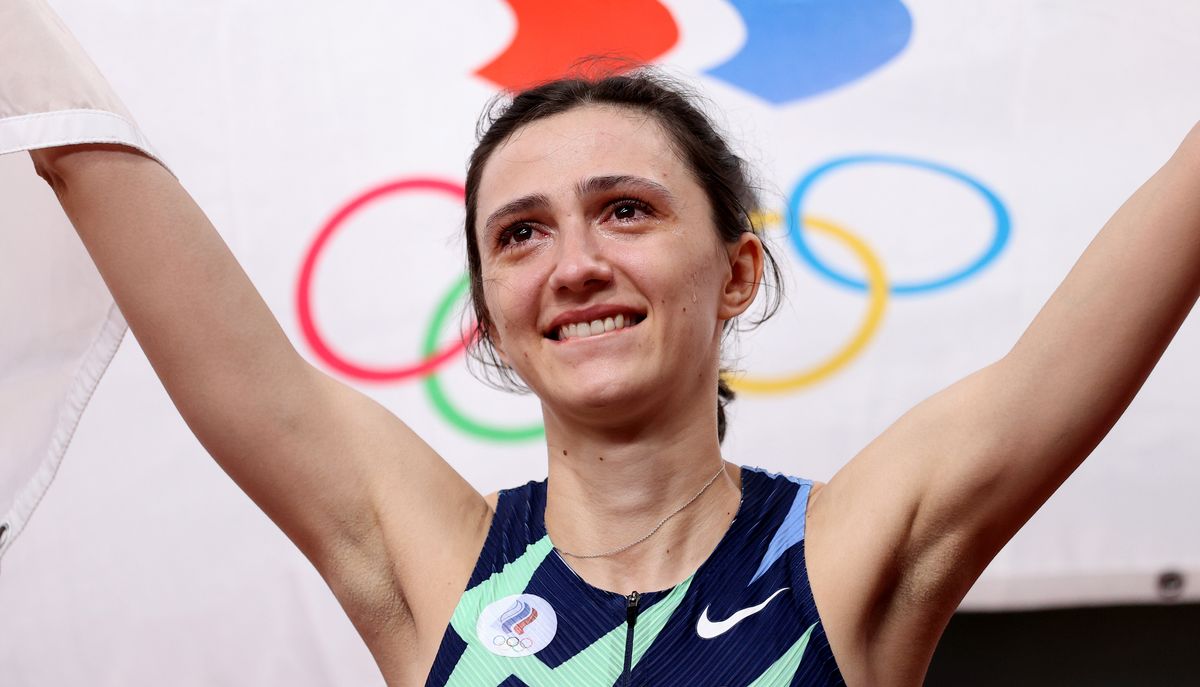 One of the most equanimeous competitors in athletics, Mariya Lasitskene dissolved into tears after winning the Olympic high jump title in Tokyo on Saturday (7), the last gold medal to be awarded in the Japan National Stadium.

Lasitskene missed the last Olympics due to the blanket ban imposed on Russian athletes and the dominant force in the event over the last seven years might have feared she wouldn’t get the chance to compete for Olympic gold in Tokyo for a number of reasons, not least the pandemic which had threatened the cancellation of the Games which had already been moved from 2020 to 2021.

The ongoing ban on Russian athletes meant only 10 Russians were allowed to compete in track and field under the Russian Olympic Committee (ROC) banner and even though Lasitskene was one of the first to be nominated, the Russian has also been dealing with a nagging leg injury which has limited her to a small handful of appearances.

Lasitskene only scraped through to the final with a third-time clearance at the qualifying height of 1.95m and the reigning world and European champion faced the unsavoury prospect of early elimination, requiring three attempts at 1.96m to keep herself in contention for the medals.

"I don't remember anything at all. There is a fog on my mind," reflected Lasitskene. "You are making mistakes, you are telling yourself you don't have the right to be here. But then you go on and continue jumping. You tell yourself: 'I won't give it up, I don't want to. I can, I must.'"

With Ukraine’s pre-competition favourite Yaroslava Mahuchikh also littering her card with uncharacteristic failures at relatively modest heights, the gold medal looked to be heading to Australia and Nicola McDermott. McDermott cleared 1.98m on her first attempt with Lasitskene requiring two attempts and Mahuchikh all three and the Australian repeated at 2.00m, staying ahead with another first time clearance while her rivals both required two attempts.

With the bar raised to 2.02m, McDermott showed a glimmer of vulnerability as she dislodged the bar on her first attempt, an error Lasitskene immediately capitalised on. Having already matched her season’s best of 2.00m, Lasitskene sailed over 2.02m on her first attempt to take the initiative in an evenly-balanced and captivating three-way final. Now guaranteed a medal, European indoor champion Mahuchikh also blinked at 2.02m and opted to pass her remaining efforts at that height.

Lasitskene had appeared distinctly fallible at the early heights but she looked supreme the higher the bar was raised, floating over 2.04m - her best jump in eighteen months - on her second attempt to significantly embellish her growing gold medal prospects.

And the competition could have easily been extended. Having already cleared one Oceanian record of 2.02m, McDermott had a tantalisingly close third and final attempt at 2.04m. And after flying over 2.00m, Mahuchikh would have been confident of matching the height she cleared for silver at the 2019 World Championships but the Ukrainian’s technique faltered under the pressure as she departed from the competition.

But after McDermott brought down the bar for the third time, Lasitskene was confirmed as the Olympic champion. She covered her mouth in disbelief before sinking to her knees and sobbing uncontrollably on the track, a stark reaction to Lasitskene’s victory at the 2018 European Championships in Berlin where she was incandescent with rage after only winning gold on countback.

“I'm in a dream! I don't believe it happened. Thanks to everyone who has supported me,” said Lasitskene after the competition.

Lasitskene duly completes the set of major high jump titles and extends her incredible run of success in major events. Not since the 2014 European Championships in Zurich where she was beaten by Spain’s Ruth Beitia - who won Olympic gold in 2016 in Lasitskene’s absence - has the 28-year-old been headed in a major championship environment. In that time, Lasitskene has won an unprecedented three successive world outdoor high jump titles along with European indoor and outdoor titles and a world indoor title in 2018.

McDermott came away with the silver medal at 2.02m while Mahuchikh, the youngest finalist in the competition at the age of 20, took the bronze medal on her Olympic debut with a 2.00m clearance.