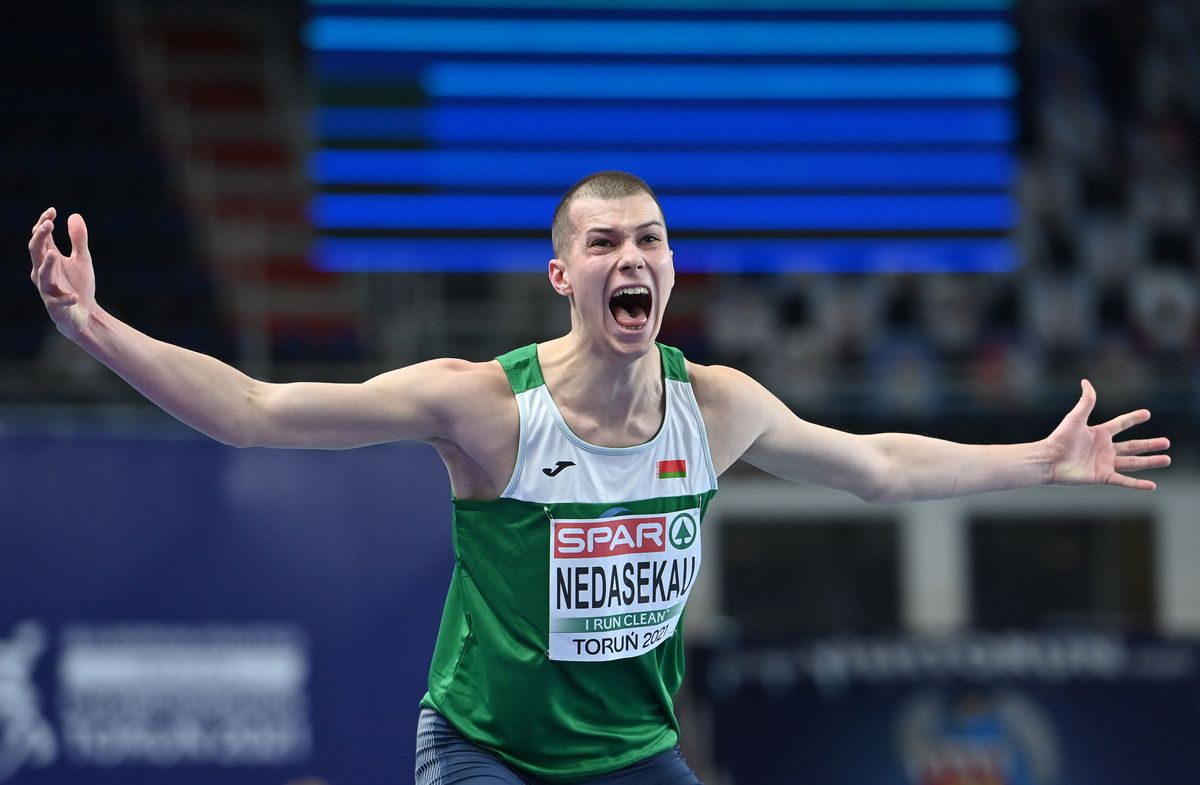 Maksim Nedasekau produced the performance of his life – so far – to wrest the title of European indoor high jump champion from Italy’s Gianmarco Tamberi after a dramatically fluctuating personal competition.

The 23-year-old Belarusian, who has won European U20 and U23 titles, earned his first senior international gold with a stunning last gasp clearance of 2.37m, the best in the world this year, to wrest pole position away from the defending champion.

It was the second gold of the final day’s morning session, with Portugal’s Pedro Pablo Pichardo securing the men’s triple jump title with a best of 17.30m.

High jump bronze went on countback to Belgium’s Thomas Carmoy with a clearance of 2.26m but from the off this was a battle between the crew-cutted Nedasekau and his flamboyant, bleach-blonde opponent, who eventually had to settle for silver after a clearance of 2.35m that had seemed decisive – until Nedasekau’s final flourish.

Nedasekau, who began this year with an indoor lifetime best of 2.31m but raised that to 2.34m in this same arena last month in beating Tamberi on countback, was full of intent as his arrival into the arena was announcing, raising a finger to indicate his intention of finishing as number one.

When Tamberi – who cleared 2.35m within four days of that Torun contest to claim 2021 top spot for himself - came out he produced a Bolt-like arrow-shooting pose, in homage to the elfin archer of the Lord of the Rings, Legolas, after whom he has styled his newly bleached hair.

While the long Jesus locks and beard – the right half of which was shaven for competition – is no longer the trademark of this exuberant performer – the athletic ambition and ability remain.

For all his aggression, the Belarusian showed a trace of nerves as he put an unwelcome X against his name on his first attempt at 2.23m, having come in at 2.19m.

Tamberi, who had delayed his entrance by a round, made maximum use of the potential psychological advantage as he cleared first time before shouting out his approval.

By the time both men had reached 2.33m Nedasekau was behind on countback, having accrued one other failed attempt. But while Tamberi required two attempts to clear that height, Nedasekau put himself ahead with a first-time clearance.

The positions were reversed again at 2.35m as Tamberi cleared at his second attempt following two failures by Nedasekau.

So the Belarus jumper gambled on a one-shot deal at 2.37m – and hit the target, leaving the bar shuddering but in place.

Now Tamberi had to match that audacious first-time flourish at a height that was just a centimetre below the indoor best he set in 2016 before the serious injury he incurred which kept him out of the Rio Olympics and took a year to heal.

He was close - but the bar fell; as did his spirits.

Rather than gambling on two attempts at 2.39m – which would have matched his outdoor personal best – the Italian remained at 2.37m, encouraging his teammates in the stands to pound out their applause in support.

His second attempt was nowhere near; his third very close, but the gold was Nedasekau’s who would have three attempts at 2.40m to match the championship record held by Stefan Holm from Sweden

“I love the arena in Torun, it is amazing,” Nedasekau said. “I already set a PB here earlier this year. I like the game of passing heights, it makes me angry and that makes me jump better. That's why I passed here again after one failure at 2.35.”

Tamberi commented: “It was an amazing competition, I expected a great competition but this guy [Maksim Nedasekau] made it such a high level, I am so happy for him. It was like a boxing match. He's a really great competitor.”

Pedro Pablo Pichardo of Portugal, an alliterative delight, produced a pulverising performance to win the men’s triple jump title, with all four of his valid marks over 17 metres and beyond the reach of all his rivals.

Wearing a thick towelling headband that looked almost like a large bandage, Pichardo – who has a 2015 outdoor personal best of 18.08m which puts him at fifth on the all-time list – added further efforts of 17.09m, 17.06m and 17.12m without ever, it has to be said, looking fully satisfied with his performance.

It didn’t matter, however. The job was done, with the main competition of the event occurring in the quest for silver involving 35-year-old Alexis Copello, another Cuban athlete who has switched nationality to Azerbaijan having won a world bronze for his native country back in 2009, and Germany’s 2016 European outdoor champion Max Hess.

After Copello had established himself in silver position with a second-round effort of 16.98m the German looked on the brink of overhauling him and did so with a final attempt of 17.01m.

But Copello, whose form had dipped, rose to the challenge with his sixth and final effort to return to the silver-medal position with an effort of 17.04m.

“The victory is something that everybody wants,” Pichardo said. “I am very happy. This medal is very important for me because it's my first medal representing Portugal. This is also a very important medal for Portugal. The competition was great, it was a great rivalry between Copello and Max (Hess).”

Mayer on course for heptathlon gold as Ehammer crashes out

The last-but-one discipline of the heptathlon, the pole vault, proved calamitous for the 21-year-old keeping Mayer on the tips of his toes, Simon Ehammer from Switzerland, as he failed to record a height – or a point – after failing three times at his opening height of 4.50m.

It was a crushing blow for the young athlete who has earned world U20 bronze and European U20 gold, and looked on for a personal best here and a first senior international competition medal.

Ehammer, who also no-heighted in the pole vault at the Swiss Indoor Championships in Magglingen where he looked on course for a world leading score, commented: “I don't know what it is all about the jumping in the last months. In Frankfurt my pole vault was really good and also during training. But today, I can't explain it. I just had a blackout.

“I have to learn to deal with this. It is somewhere in my head. I have not yet decided if I will run the 1000 metres.”

Mayer cleared up to 5.20m before retiring after two failures at 5.30m. Mayer commented: “I had a problem in my neck during the high jump, that's why I stopped. It was also a problem in the pole vault. But I came here for technical training. I wanted the title and also the European record, but that was a bonus.”

Going into the concluding 1000m, the world decathlon record-holder might have fallen slightly off European record pace but he has a commanding lead with a total of 5581 points with Spain’s defending champion Jorge Urena (5319 points) and home favourite Pawel Wiesiolek (5294 points) second and third respectively. The latter cleared a lifetime best of 5.20m in the pole vault.

Switzerland’s Ajla Del Ponte and France’s Carol Zahl headed the qualifiers for tonight’s women’s 60m final with respective times of 7.19 and 7.21. Sweden’s Claudia Payton, told as a 13-year-old that a leg fracture incurred while playing football might leave her in a wheelchair for life, broke her personal best in the heats and semifinal, making the final as a non-automatic qualifier with 7.26.

Great Britain’s world indoor champion Andrew Pozzi looked coolly in control as reached tonight’s 60m hurdles final by winning his semifinal in 7.53 despite bashing the third of the five hurdles. France’s Wilhem Belocian was the fastest qualifier with 7.49.

Fastest into tonight’s women’s 60m hurdles final were reigning champion Nadine Visser from the Netherlands, in 7.86, with 19-year-old home athlete Pia Skrzyszowska smashing her lifetime best with 7.88 to qualify as a semifinal winner.