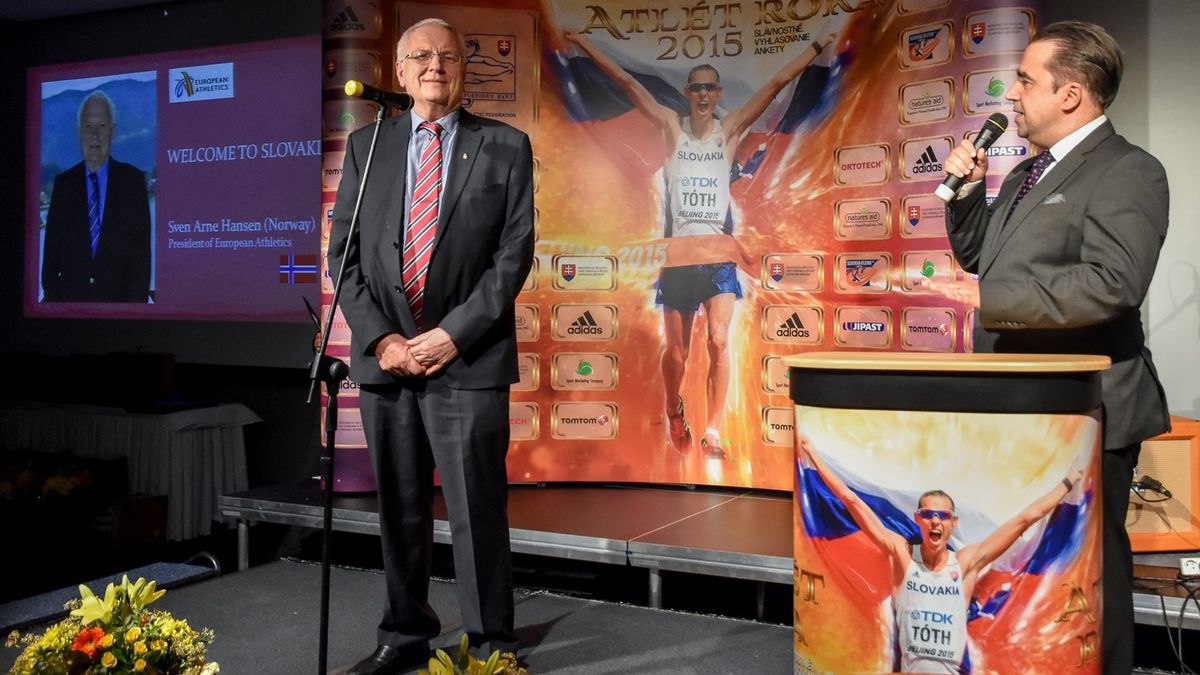 European Athletics President Svein Arne Hansen and Peter Pellegrini, chairman of the Slovak parliament, were at the special gala awards evening in Bratislava as Matej Toth was named Slovak Athlete of the Year for a fourth time after making history for his country this summer.

Toth, 32, became the first Slovakian to win a gold medal at the IAAF World Championships when he triumphed in the 50km walk amid the Beijing heat in August.

“I am delighted to present this award to this wonderful athlete who brought his country a historic gold medal in Beijing. It’s also meaningful that a race walker be named Athlete of the Year,” said President Hansen.

Twelve months on from winning silver at the European Athletics Championships in Zurich, Toth confirmed his status in the sport with a brilliance performance in China, his victory in 3:40:32 so punishing for the rest that he even had time for a toilet break during the race.

It was some year for him. When he won in Dudince in March, his time of 3:34:38 was the third best in history.

'I had an excellent year, all worked perfectly,' said Toth, who won the award for the third consecutive time. 'With the support of my great team and my excellent family, I hope to continue with it also in the Olympic year.'

In the poll organised by the Slovak Athletics Federation, Toth, who plans to compete in a 20km event in the spring in the build up to Rio, received 589 points, beating hammer thrower Marcel Lomnicky (449) and 400m runner Iveta Putalova (426).

Toth's team were further rewarded when Matej Spisiak, who is guiding him, was named Coach of the Year.

Slovakia’s Young Athlete of the Year is Michaela Peskova, who finished sixth in the 400m hurdles final at the European Athletics Junior Championships in Eskilstuna in July, and the Surprise of the Year award was given to Putalova, who was fourth in the 400m final at the European Athletics Indoor Championships in Prague in March with a national record time of 52.84.