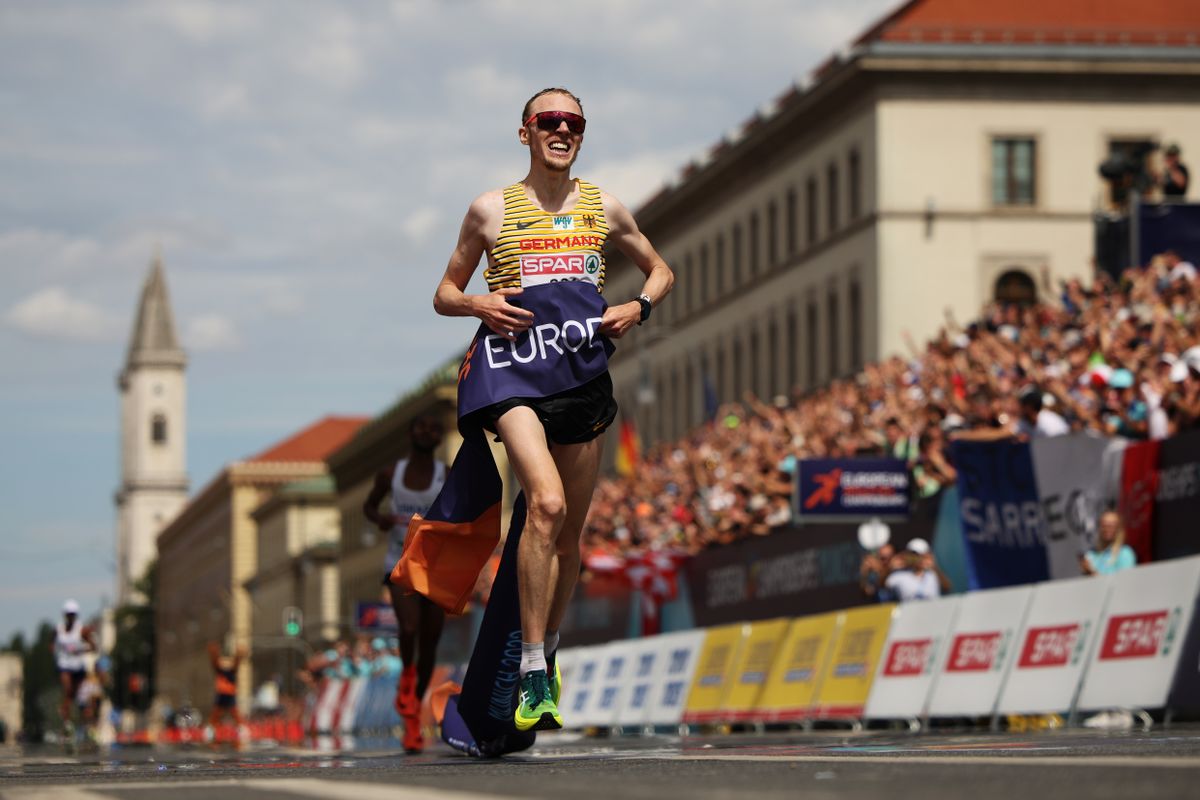 Home athlete Richard Ringer stole the show at the Odeonsplatz this afternoon as a sprint finish saw him overtake the Israeli runner who seemed to have had the race won, Maru Teferi, in the final 20 metres to claim gold in 2:10:21 on the first day of the Munich 2022 European Athletics Championships.

Teferi dedicated his medal to “all the families of the victims” of the attack on Israeli athletes during the Munich 1972 Olympics.

But as the 32-year-old Ringer crossed the line he seemed momentarily unable to believe what he had accomplished, pointing a finger questioningly at his own chest before sinking down to place his forehead on the hot surface of the Odeonsplatz, the blue ribbon of the finishing tape wound around him.

Even including the days prior to reunification, Ringer became the first ever German athlete to win the men's marathon title at the European Athletics Championships.

Teferi took silver in 2:10:23 and was soon cavorting happily in the strengthening sunshine with his teammate Gashau Ayale, who had won his individual battle with the second German runner home, Amanal Petros, to claim bronze in 2:10:29 with Petros clocking 2:10:39 in fourth.

The women’s race, which had begun in overcast conditions, also finished in dramatic circumstances as Poland’s Aleksandra Lisowska, her face contorted with effort, won an attritional contest in 2:28:36.

Having been 11 seconds clear at 41km, however, the Pole eventually had a margin of just six seconds as Croatia’s fast-finishing Matea Parlov Kostro emerged from a wringing struggle between three chasing athletes to claim silver in 2:28:42.

Had the course been a kilometre longer, it seemed she might have had gold. Although the Polish winner begged to differ…

The bronze went - just - to former hockey player Nienke Brinkman of the Netherlands from Germany’s Miriam Dattke, with both being given the same time of 2:28:52 after an extended and agonising struggle over the final kilometre.

Ringer was one of five athletes who had broken clear by the 39km mark, with Spain’s longtime leader Ayad Lamdassem, fifth at the Tokyo 2020 Olympics, also in the group.

At the 40 kilometre-mark Ringer, wearing a length of white material like a ponytail down the back of his yellow peaked cap, gritted his teeth and pushed into the lead.

Lamdassem found the pace too much, but, shortly afterwards, so did Ringer, and he dropped off the lead at the 41km point, with his teammate Petros taking up the challenge in front alongside Teferi.

The gold looked likely to go to one or other of them, with Ringer, now minus his cap, in apparently dogged pursuit of bronze. But the race was not yet run – and the expansive boulevard of Ludwigstrasse was to witness more drama.

First Ringer passed his flagging colleague, who was shortly afterwards overtaken by Ayale, but the distance between himself and Teferi seemed insurmountable.

Step-by-step it got less so, until, to a roar of excitement from the home fans packing the stands by the finish, Ringer wrung yet more out of himself to pass the leader within a few strides of the line. 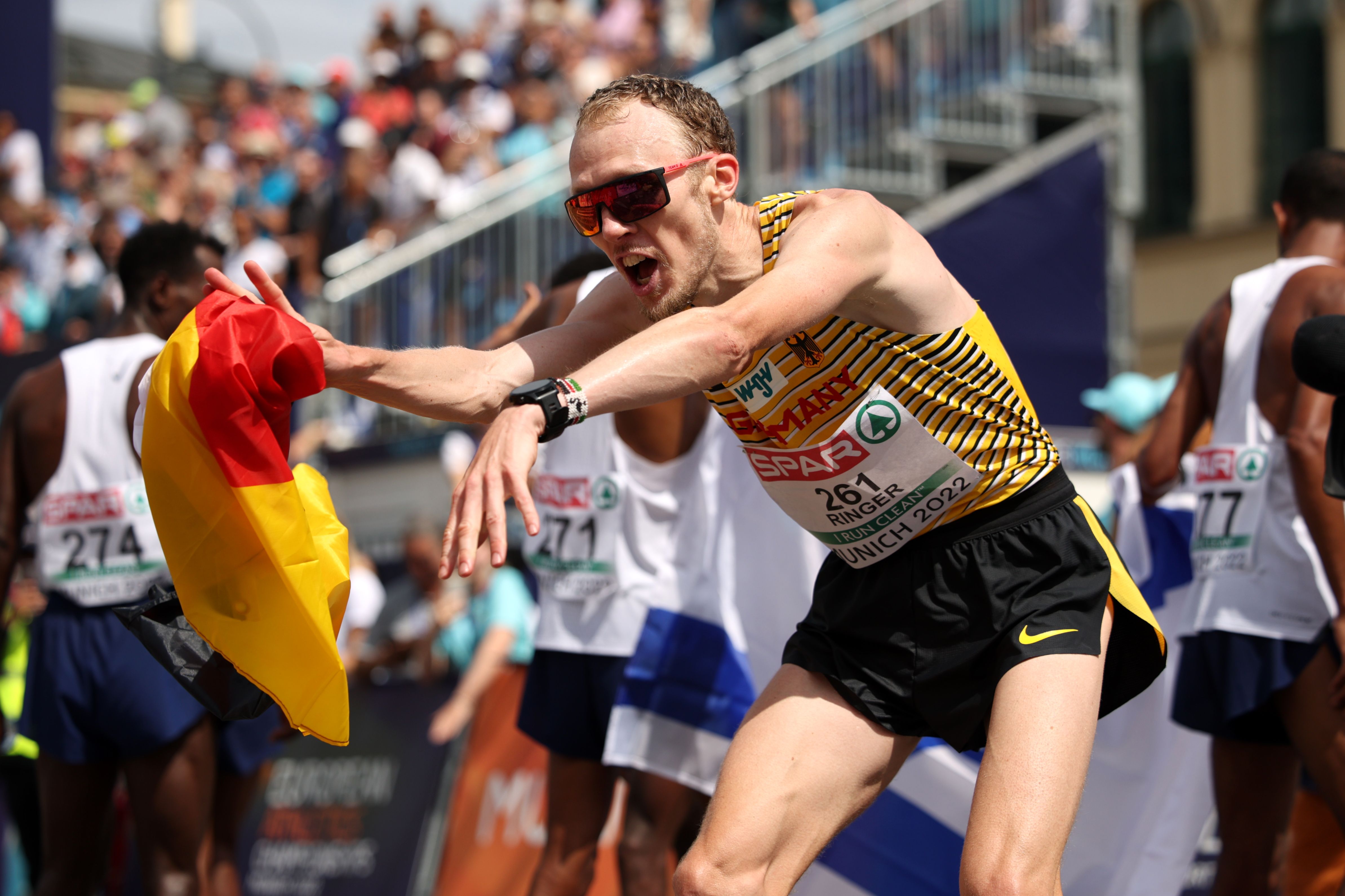 France’s Nicolas Navarro was fifth in 2:10:41, with Lamdassem taking sixth place in 2:10:52, one place ahead of the third Israeli home, Yimer Getahun.

That meant a comfortable team gold for Israel, with their first three runners home compiling an aggregated time of 6:31.48, with Germany taking silver on 6:35.52 and bronze going to Spain on 6:38.44.

“Although this is an individual event, the great motivation was the team because we were going for a team medal and the chances were good to get one,” Ringer said.

“I would have never thought that this team spirit could be so strong and help so much, like at the 35K or 37K, with all the pain you feel. Every marathon is a surprise, now I am the champion of Europe. I started as a 5K runner, this is why I finished strong.”

Teferi, who arrived in Israel from Ethiopia in 2006 – four years before Ayale took the same route - commented: “It was an excellent team effort of the team Israel. We are very pleased with it, especially because these championships mark the 50th anniversary of the tragic events that took place here in Munich in 1972. 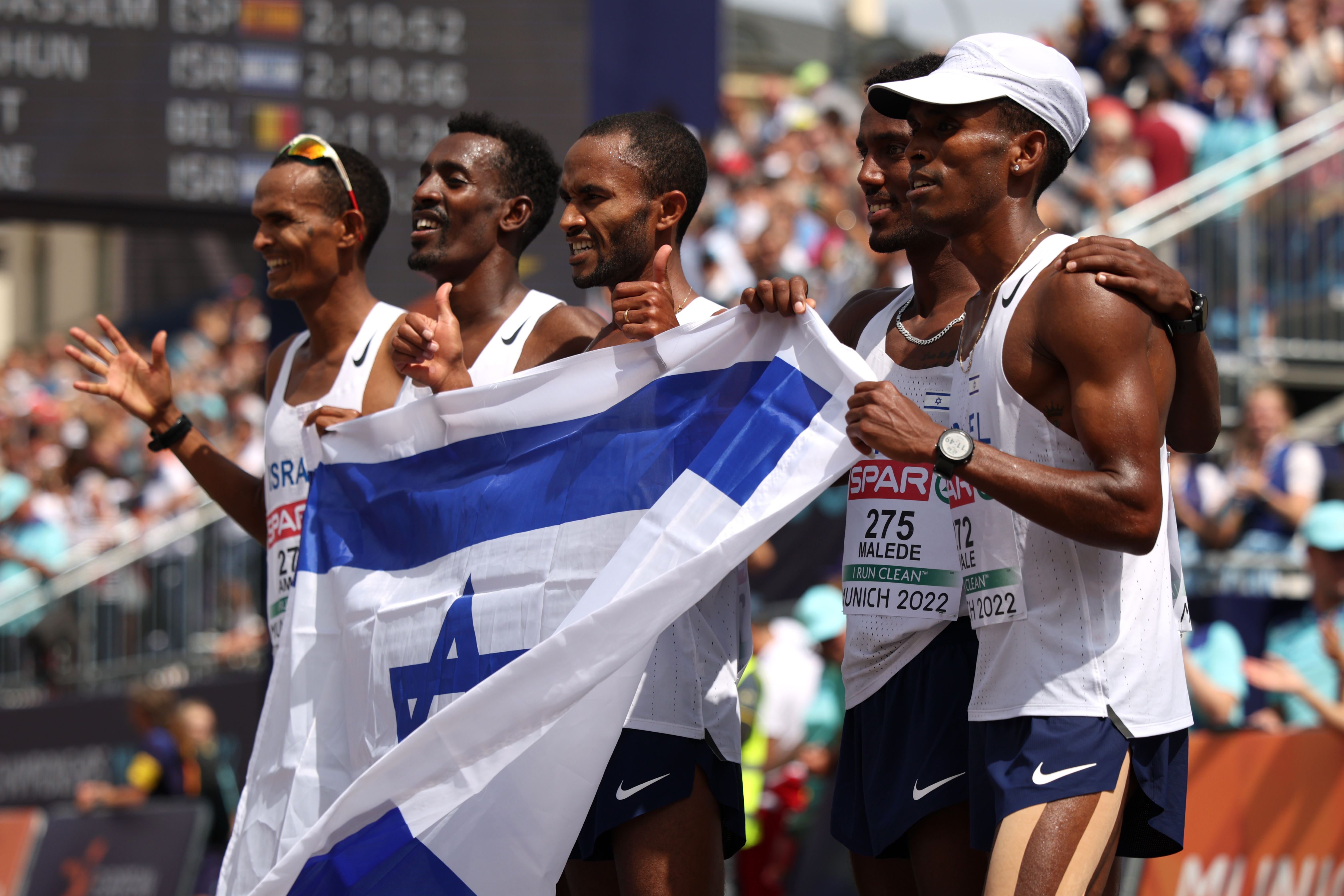 “I would like to dedicate this medal to all the families of the victims, and to send my love to everyone. As soon as we realised that these championships were going to take place here in Munich, we felt it in the heart, an inner strength to the best we can to honour those families.

On the race itself, the silver medallist said: “I did not really see the German athlete catching up, I only realised it when he was so close to the finish line, but overall, I came second and I am very happy with this medal.”

A couple of minutes before Lisowska also finished like a 5000m runner it looked as if Parlov Kostro would be the one to miss out on medals in the women’s race as she lagged behind the other two athletes chasing the Polish leader, Nienke Brinkman of the Netherlands and home runner Miriam Dattke, and began looking behind her.

But from somewhere she found new energy, and the battle for bronze continued all the way down Ludwigstrasse with Brinkman, flagging at the line, just doing enough to make the podium ahead of Dattke.

While a medal may just have eluded the German runner, her time - and that of colleagues - ensured gold was secured in the team event with a total time of 7:28.48, with Spain taking silver in 7:39.25 and Poland bronze in 7:40.54.

“Before the race, I did not believe this could happen and still cannot believe it right now that I am the European champion - even though I was fully prepared for this, and I knew I was considered one of the medal favourites, especially after breaking the Polish record last year,” said Lisowska.

“Even in the last 100m, when I turned around and saw the Croatian athlete was coming closer, I was not worried. I knew I had it under control. Actually, I was waiting for that moment so I could give it one final kick.”

Parlov Kostro commented: “It was a really hard race with a lot of ups and downs and the finish was especially hard. On the last kilometres, we were in a group of four and I started to be very tired. In the last 500 metres, I knew it was my last chance to come in front for a medal.”

Brinkman, 28, only took up running seriously in 2020, during the pandemic, and bettered Lornah Kiplagat’s Dutch record in only her second marathon as she clocked 2:22.51 in this year’s Rotterdam race.

She reflected: “I really liked the race and I am so happy for the medal. It is almost a fairy-tale, a race like this, my career is just starting.”