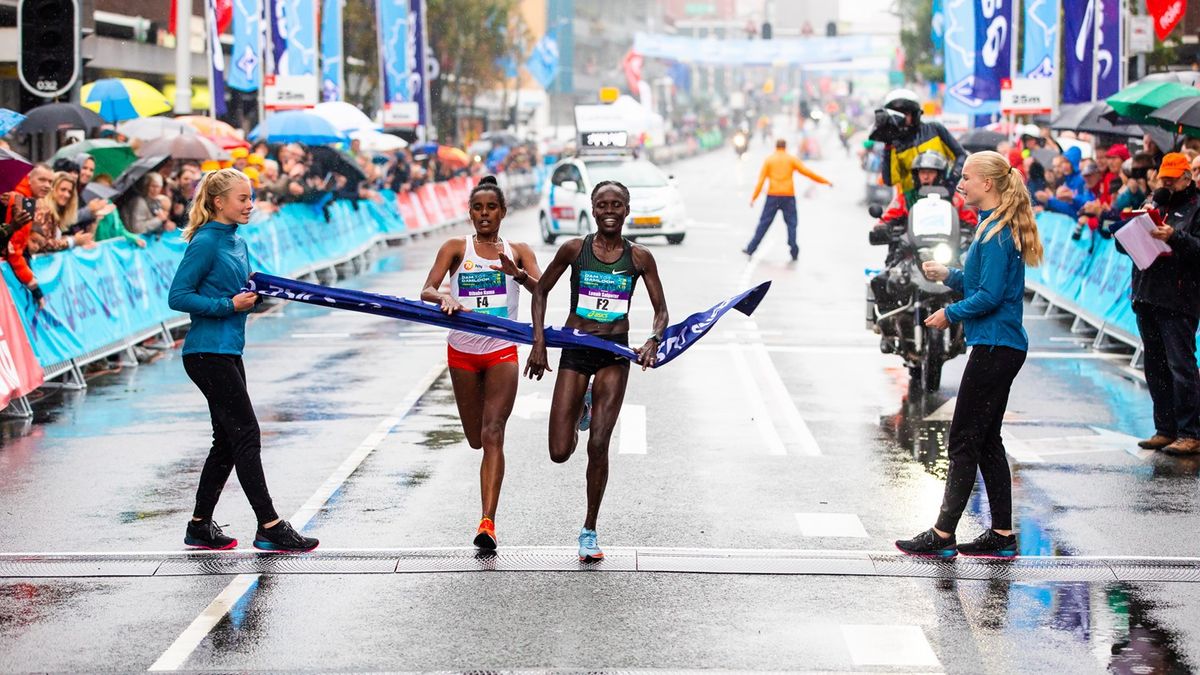 Salpeter shows her class in the Dam tot Damloop race

It has been quite a summer for Israel’s Lonah Chemtai Salpeter and despite the rain in Zaandam, the Netherlands she was celebrating again on Sunday.

The European 10,000m champion produced a thrilling final sprint to win the famous 10-mile Dam tot Damloop race – which saw 45,000 people run between Amsterdam and Zaandam in the a five-star certified road race by European Athletics Running for All – showing true tenacity to hold off her rivals.

“It was tough,” said the 29-year-old, the first European winner since 2010. “But I was determined not to lose, so I kept at it. This is my first race over the '10 English miles’. I am delighted with such a dramatic win.”

“It was a tough race as I’m in the middle of my marathon preparations,” she added. Salpeter will compete over the classic distance at an as yet unannounced race at the end of November with the target of making a massive reduction on her personal best of 2:40.16.

Krumins was happy with her finish: “Overall, it went very well. At the 10-kilometre mark the pace was too fast and it was cold. But it’s a lovely route and being cheered on by so many people was very encouraging.”

Belgium's Bashir Abdi was the leading European in the men’s race in fourth in 46:07 as Uganda's Joshua Cheptegei won in 45:15.

Italy’s Sara Dossena had a superb warm-up for November’s New York Marathon with victory on home soil on Sunday as she won the Udine Half Marathon in a personal best of 1:10:10, securing victory by 22 seconds from Burundi's Elvanie Nimbona.

Fresh from her team silver medal at the European Athletics Championships, after finishing sixth in personal best 2:27:53 and being the first Italian woman home, Dossena will now look for more glory in the Big Apple.

The road season is now in full swing and it was a good weekend for Italy as they had a cleans weep in the men’s race at the Roma Road Mile as Osama Zoghlami won in 4:02.06 from compatriot Soufiane El Kabbouri, second in 4:03.05.

In the women’s race, Konstanze Klosterhalfen landed a comprehensive victory in 4:26.63 with Spain´s Esther Guerrero second in 4:39.33.

There was success for Swiss medallists from Berlin 2018 on home soil at the Greifenseelauf Half Marathon in Uster on Saturday.

Tadesse Abraham, who was second in the European Championships marathon last month, won here in 1:03:37 while teammate Fabienne Schlumpf, the 3000m steeplechase runner-up, triumphed in 1:15:30.

However, there remain a few track and field meetings as the outdoor season comes to an end and still time for new achievements as Poland’s Joanna Fiodorow proved.

The Berlin 2018 hammer bronze medallist improved her personal best as she won in Ostroda with 75.63m, to take her into winter training with even greater motivation. At this same meeting, Berlin shot put gold medallist and fellow Pole Michal Haratyk won with a very solid 21.00m.

In Lutsk, Ukraine won the three-way international U18 match with 66 points ahead of Belarus (61) and Turkey (60) as Valeriya Ivanenko improved her own Ukrainian U18 record by more than a metre to 75.80m with the 3kg implement to win girls hammer throw, her previous best having been 74.36m which she threw in qualifying at the Gyor 2018 European Athletics U18 Championships in July.

Ivanenko's compatriot and holder of the world U18 best Mykhaylo Kokhan also had an outstanding competition and threw 84.27m with the 5kg boys hammer. Another Gyor winner, Yaroslava Mahuchikh, cleared 1.85m to win the girl's high jump but didn't attempt any higher heights due to the cold and rainy conditions.