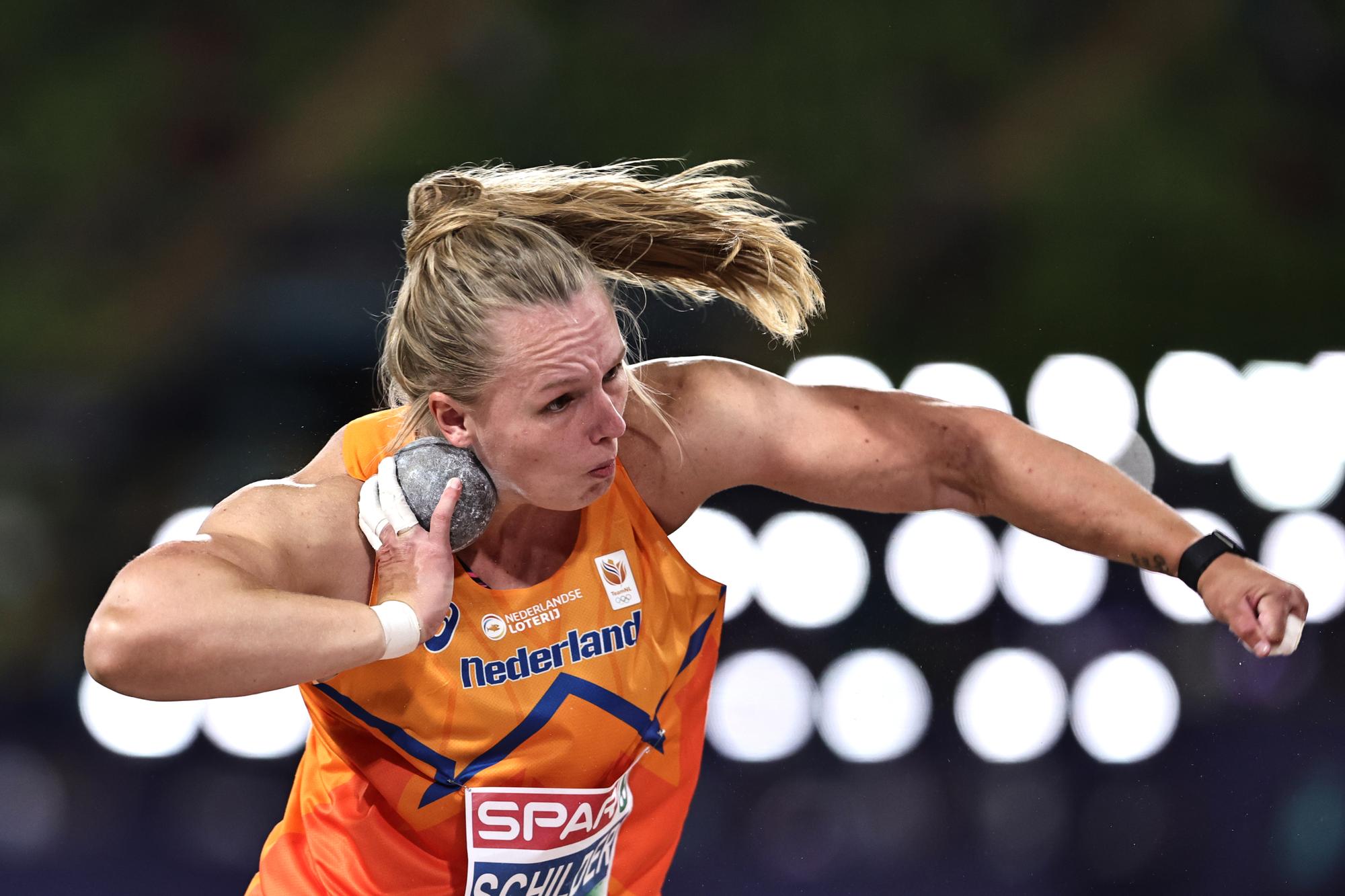 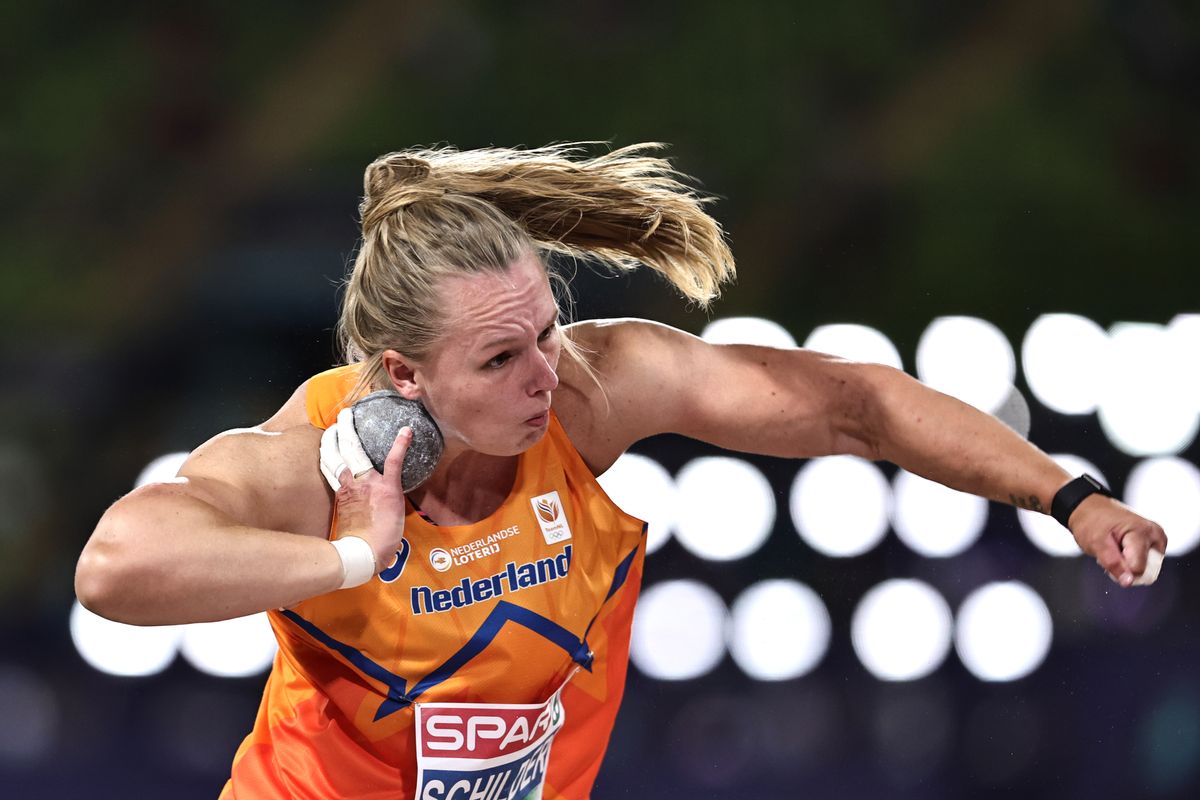 There were historic shot put golds for Jessica Schilder from the Netherlands and Croatia’s Filip Mihaljevic on the opening day evening session inside the grand Olympic Stadium at the Munich 2022 European Athletics Championships, which run from 15-21 August as part of the multi-sport European Championships.

The pre-event favourite from Portugal had to settle for silver with 19.82m on a night of double Dutch medal celebration, Schilder’s team-mate Jorinde van Klinken claiming bronze with 18.94m.

They were the first ever medals in the women’s shot for the Netherlands, and Portugal, and Mihaljevic’s success in the men’s final was the first for his country in that event.

Unlike Schilder, who led from the opening round, the 28-year-old Croatian had to claw his way up from fifth to first, taking the lead in round three and finishing in style by equalling his lifetime best of 21.88m in the final round.

She followed up in the second round by joining the 20-metre club, her 20.24m European lead improving her Dutch record of 19.84m she set in Chorzow on 6 August.

Dongmo responded with 19.82m, a Portuguese outdoor record, with Van Klinken moving up into third with 18.94m – just two hours after competing in the discus qualifying round.

The top three remained unchanged - Sweden’s Fanny Roos moving up into fourth with a final round effort of 18.55m – ahead of German champion Sara Gambetta, who finished fifth with 18.48m.

“This is really like a dream,” said Schilder. “I did not expect this to happen at the end of the season. I did not expect it tonight because the qualification in the morning did not go so well.”

Schilder had been second best in morning qualifying with 18.60m, behind Dongmo’s 19.32m.

“I just needed a little more, an extra push, and it happened,” she continued. “I am especially happy for Jorinde, as she did a great job. I am so excited to share the podium with her.”

Having fouled her first two attempts in the discus qualifying competition, van Klinken did well to steady her nerve for a successful third throw and maintain her composure through to the shot final.

“It’s amazing,” she said. “I knew it was going to be an extremely tough day for me. I could not ask for more.”

In the men’s final, Sinancevic led the way with 21.07m in round one but found himself down in third place at the halfway stage.

In round four Mihaljevic extended his lead to 21.53m, then Sinacevic took second spot with 21.39m in the penultimate round.

The Serbian dug deep with his last effort but his 21.32m was not enough to unseat Mihaljevic, who celebrated with a 35 centimetre improvement to 21.88m. 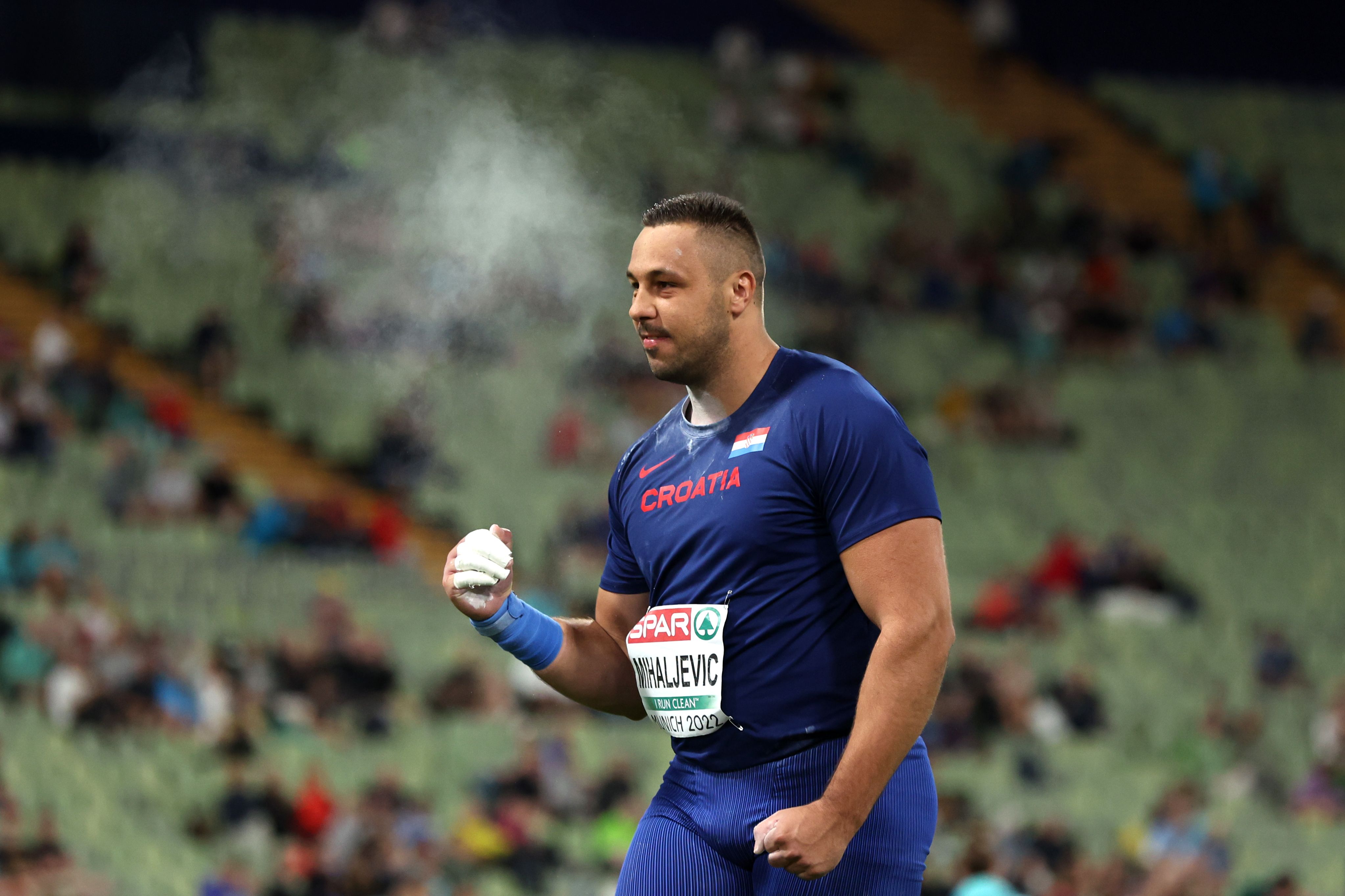 “I have been working hard all year and it paid off,” said the mountainous Mihaljevic, whose father Mirko – presumably of a more slender build – won the Yugoslav cross country title in 1987 and 1988. "It was a tough competition, and very emotional. It was a tactical event, mentally and my mind was strong."

Sinancevic concurred. “It was a great battle. I gave it my absolute everything.”

It was such a good battle that the Poles who finished first and second in Berlin four years ago, Michal Haratyk and Konrad Bukowiecki could only finish fifth and sixth respectively, throwing 20.90m and 20.74m.

At the halfway stage in the decathlon, Simon Ehammer holds a commanding lead of 334 points and is marginally ahead of schedule to break the Swiss record he set at the Hypo Meeting in Gotzis in May.

At the Austrian event, the world indoor heptathlon silver medallist had 4636 points at the end of day one and proceeded to rack up 8377. In Munich he starts day two with 4661 after a trailblazing opening day in which world champion and world record-holder Kevin Mayer sadly failed to stay the course.

The Frenchman withdrew after the opening event, the 100m, citing post-Eugene fatigue and an adductor problem. Ehammer won that race, clocking 10.56, and followed up by uncorking a 8.31m long jump that erased Daley Thompson’s 1978 championship decathlon best of 7.93m. 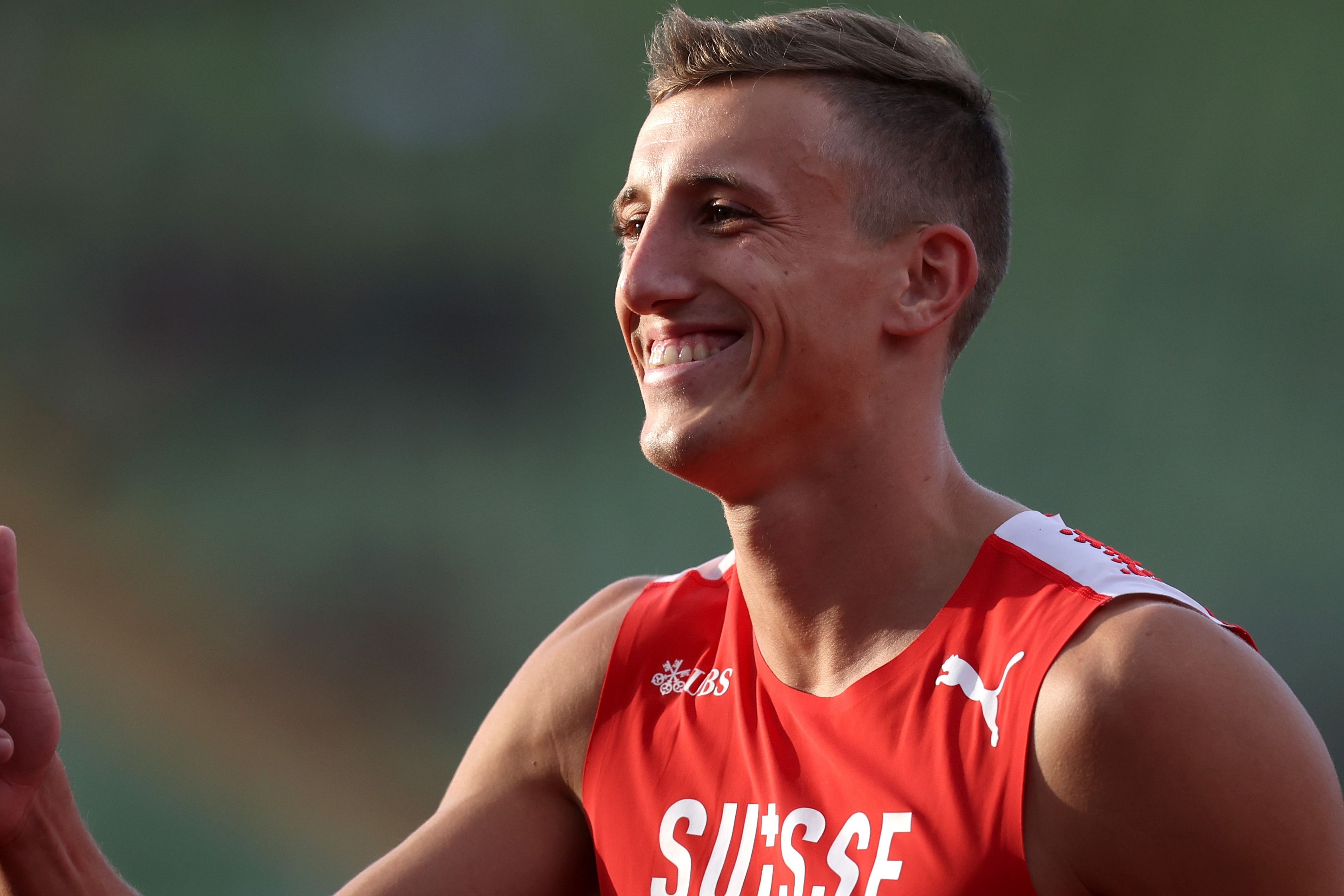 The 22-year-old, who was rewarded with a bronze medal for concentrating on the long jump at the World Championships, finished the morning with 14.24m in the shot and maintained his momentum in the evening, matching his lifetime best with a second time clearance at 2.05m in the high jump and then sailing over 2.08m at the third attempt.

Then came a flying finish to the day as Ehammer charged to victory in the 400m in 47.40. His closest pursuer, on 4327 points, is Italy’s Dario Dester. Norwegian champion Sander Skotheim lies third with 4324.

Already the only athlete to have won five titles in any individual event, Sandra Perkovic will have the chance to match Marita Koch’s record haul of six gold medals - three from the 400m, three from the 4x400m relay - in the final of the women’s discus on Tuesday evening.

The 32-year-old Olympic champion, a one-time Croatian member of parliament and silver medal winner in Eugene, topped the list from Qualifying Group A with a third round mark of 65.94m. 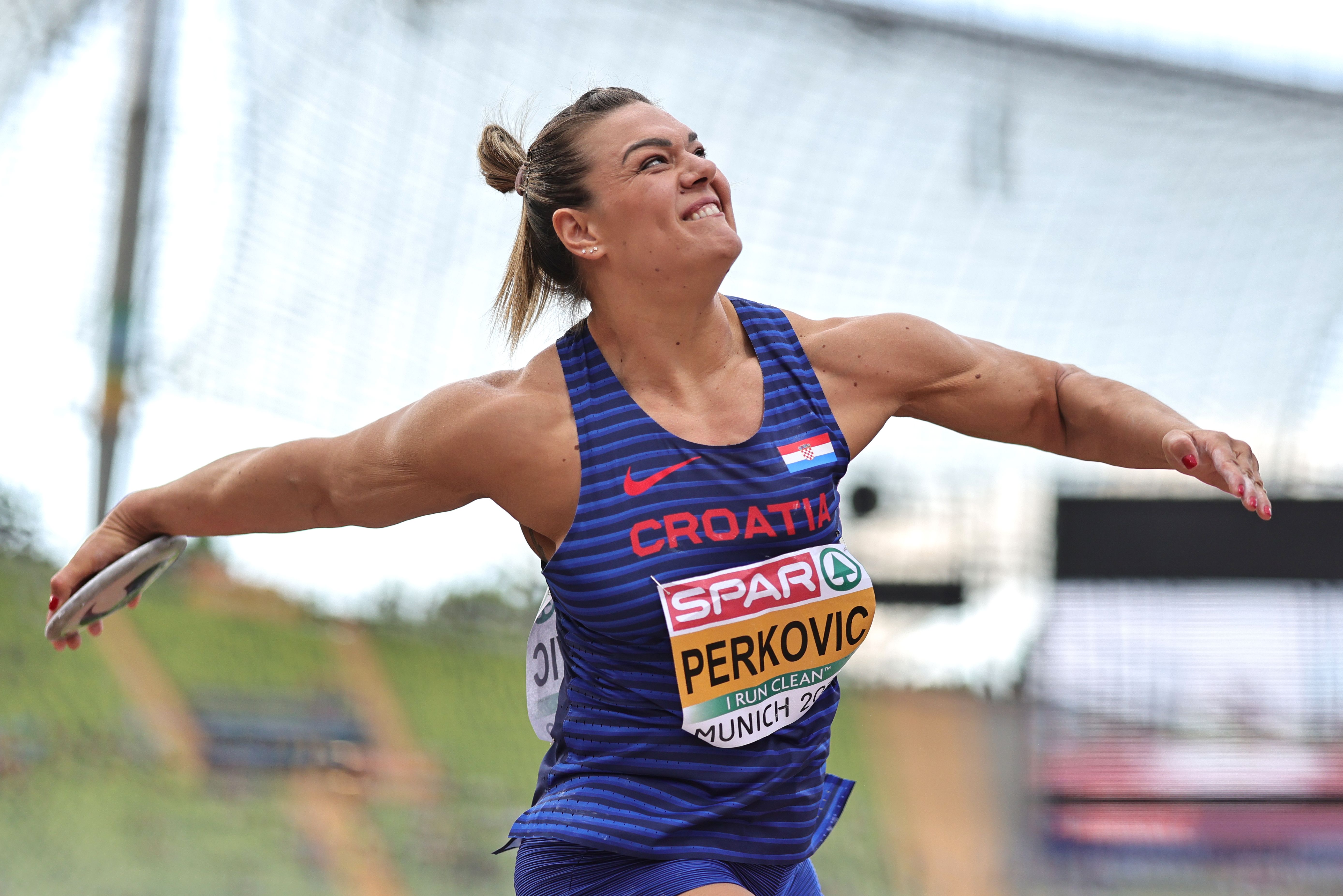 “I needed to find a final good throw,” said Perkovic, who opened with 62.67m and fouled in the second round. “My life depends on this.

“The European Championships is always very special to me, because my first major medal was a European gold medal - in Barcelona in 2010. I am not that old, but I have so many medals. This is the reason why I keep pushing myself.

“I am proud to be the number one in Europe and to represent Europe around the world. They all know who the discus girl is, and I think I want to stay in this position for a long time.”