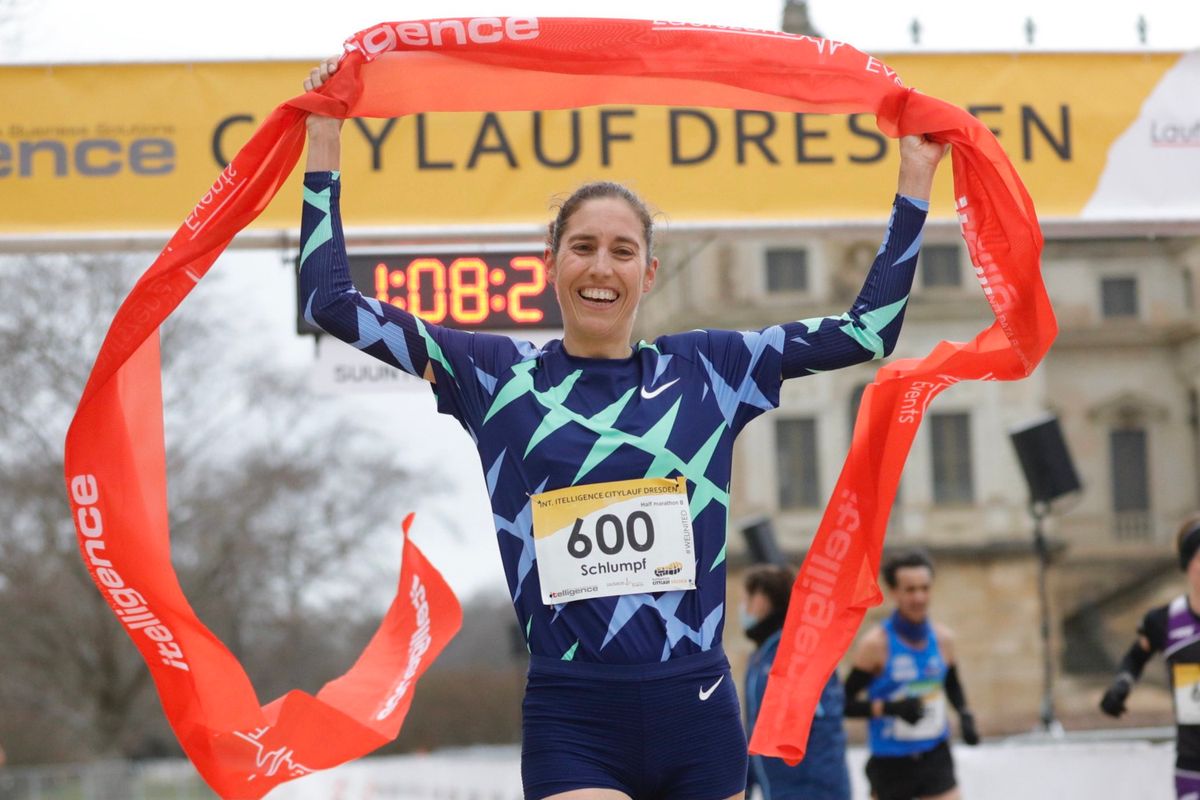 Schlumpf smashes Swiss half marathon record ahead of her marathon debut

European 3000m steeplechase silver medallist Fabienne Schlumpf gave further notice to her ability as a road racer by breaking her Swiss half marathon record in cold conditions at the elite-only Itelligence Citylauf Invitational in Dresden on Sunday (21) morning.

Running a near-solo race with only a pacemaker for company, Schlumpf finished in 68:27 to shave eleven seconds from her previous national record and to win by almost one-and-a-half minutes from Germany’s Domenika Mayer in 69:52.

“I am used to running in cold conditions so I was not too bothered by the weather. The race was perfectly organized and I had a great pacemaker,” said Schlumpf, who is targeting the Olympic marathon qualifying time next month. “Yes, in theory I should be able to run well below 2:29:30; however this is a marathon.”

Schlumpf is by no means alone in sporting circles in having to demonstrate flexibility in terms of her training and racing schedules although her prospective marathon debut in Belp, Switzerland did not take place as planned on 14 March due to inclement weather rather than coronavirus restrictions.

However, the event has been rescheduled for 4 April when Schlumpf will seek to obtain a time which will qualify for her second Olympic Games, five years after she reached the final in the 3000m steeplechase in Rio de Janeiro.

The Itelligence Citylauf Invitational also offered a marathon for athletes with aspirations of achieving last-minute qualifying standards for the Olympic Games.

The only athlete - male or female - to secure the qualifying time was Germany’s Simon Boch who clocked a near-solo 2:10:48 on his marathon debut to undercut the Olympic qualifying standard of 2:11:30.

“My goal was to run 2:09. However I could not have done any better in these conditions. It was extremely tough. Regarding the Olympics I now have to wait and see what happens in Hamburg,” said Boch, who is currently the third fastest German in the qualifying period.

Belgium’s Soufiane Bouchikhi and Tom Hendriske from the Netherlands were second and third respectively in 2:12:39 and 2:13:03 while Hlynur Andresson was fifth on his debut in an Icelandic record of 2:13:37.

One of the athletes who could deny Boch a place on the German marathon team is Richard Ringer who prepared for the Hamburg Marathon on 11 April with victory in the adjoining half marathon in 61:33, leading a domestic clean sweep ahead of Nils Voigt (61:35) and Amanal Petros (61:37).

Ringer clocked the Olympic qualifying standard in the Valencia Marathon with 2:10:59 last December but the former European 5000m bronze medallist is now aiming for a sub-2:10 performance in Hamburg next month in order to impress the German selectors.

Miriam Dattke was targeting the Olympic qualifying standard in the women’s race but the European U23 10,000m silver medallist was a late scratch due to a muscle injury. Poland’s Anna Bankowska (formerly Gosk) fell off Olympic qualifying pace after the 25 kilometre-mark but was still rewarded with her first marathon victory in 2:31:16.

Also on the road to the Hamburg Marathon, Katharina Steinruck won the 10km in 31:59 in a sprint finish against Sweden’s Sarah Lahti who was credited with the same time while Richard Douma from the Netherlands won the men’s race in 28:55.

At the 40th edition of the famous Dudinska 50 in Dudince, Slovak Republic on Saturday (20) morning, Lithuania’s Arturas Mastianica finished an excellent second in a line-up replete with elite race walkers from Central and South America.

While Guatemala’s Bernardo Uriel Barrondo, the younger brother of 2012 Olympic 50km race walk silver medallist Erick, won in 3:47:01, Mastianica was a strong runner-up in a national record of 3:48:24.

Dominic King just missed the Olympic qualifying standard of 3:50 but came home in tenth in 3:51:13 to break the long-standing British record at the distance.

Reigning Olympic 50km race walk champion and home favourite Matej Toth dropped down in distance to contest the 20km race walk and the Slovakian demonstrated he is in good shape ahead of his Olympic title defence.

In his final competition in Dudince before retirement, Toth finished ninth in 1:22:14, his fastest time in six years.