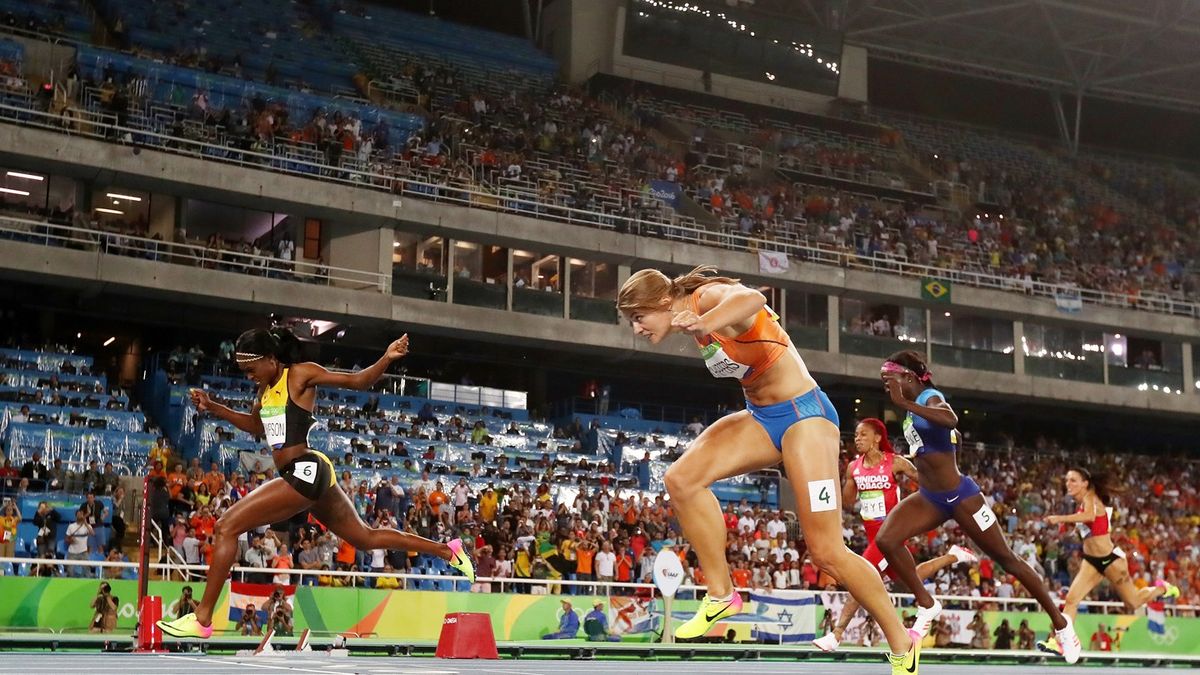 Silver for Schippers and history for Spanovic

Dafne Schippers won the first Olympic medal of her career as Serbia’s Ivana Spanovic made history for her country in Rio on Wednesday night.

Schippers did all she good, tumbling as she reached the line in her pursuit of gold in the 200m, while with bronze, long jumper Spanovic became the first track and field athlete to win an Olympic medal for Serbia as an indepedent nation. Earlier in the day, France’s Mahiedine Mekhissi-Benabbad won 3000m steeplechase bronze, his third successive Olympic medal.

A heptathlete four years ago in London, where she finished 11th, Schippers arrived here as the 200m world champion and not since Bertha Brouwer’s silver in Helsinki in 1952 had a Dutch athlete - male or female - won an Olympic medal in sprinting.

Schippers has bridged that gap, at a Games where she was hit by an injury before the competition started, but which saw chase Jamaica’s 100m champion Elaine Thompson all the way in a gripping final.

As Thompson completed the double in 21.78, Schippers also ran a season’s best of 21.88 with American Torie Bowie (22.15) in third. Great Britain’s European champion Dina Asher-Smith produced her fastest time of the summer, 22.31m, in fifth.

Spanovic wrote her way into Serbian sporting history with her eighth successive long jump medal since winning bronze at the IAAF World Championships in Moscow in 2013.

It is quite a streak and the European champion achieved it by breaking the national record.

Leading at the end of round one with 6.95m, Spanovic suffered two fouls and by round four, America’s world champion Tianna Bartoletta had taken over on countback after also reaching 6.95m with her third effort.

But the fifth round decided the medals - and what a round it was.

First defending champion, Brittney Reese, of the USA, took the lead with 7.09m and then Spanovic came so close to matching her - jumping a brilliant 7.08m.

It was a national record by six centimetres and took the Serbian back into second before Bartoletta then jumped 7.17m.

Spanovic threw everything into her final round, which brought her 7.05m, as Bartoletta won from Reese, who almost took the title with a last effort of 7.15m.

After two successive Olympic silvers, three-times European 3000m steeplechase champion Mekhissi-Benabbad looked like he had missed out on a medal as he finished fourth (8:11.52) in a race won by Kenya’s Conseslus Kipruto (8:03.28).

But then Kipruto’s teammate, bronze medallist Ezekiel Kemboi, was later disqualified for stepping off the track, raising the Frenchman onto the podium.

It is another brilliant moment in Mekhissi-Benabbad’s career which has also seen him win bronze twice at the world championships.

At the halfway point of the decathlon, Germany’s Kai Kazmirek is in second with 4500, just 121 points adrift of America’s defending champion Ashton Eaton, and 11 ahead of Canada’s Damian Warner in third. Kevin Mayer of France is also well positioned in fourth with 4435 points and he will be looking to challenge for a spot on the podium considering his strongest events are held on the second day.

Christophe Lemaitre, who had suffered injury this year, was rightly delighted with his run in the semi-finals of the 200m where he came through in a season’s best of 20.01 to qualify, finishing second in his race behind American LaShawn Merritt (19.94).

Lemaitre is joined in the final (at 3.30am CET tomorrow) by fellow Europeans Ramil Guliyev, of Turkey, Great Britain’s Adam Gemili, and the Netherlands’ Churandy Martina as they take on Usain Bolt.

After falling on his way to 10,000m gold on Saturday, Britain’s Mo Farah suffered a stumble in his heat of the 5000m but progressed to the final, while Poland’s Wojciech Nowicki (77.64m) had the best throw in qualifying in the men’s hammer. Reigning European champion Pawel Fajdek suffered a shock elimination and will not be able to add the Olympic title to his list of honours.

The men’s javelin final will have a strong European presence, including Finland’s London bronze medallist Antti Ruuskanen who qualified with 82.20m.