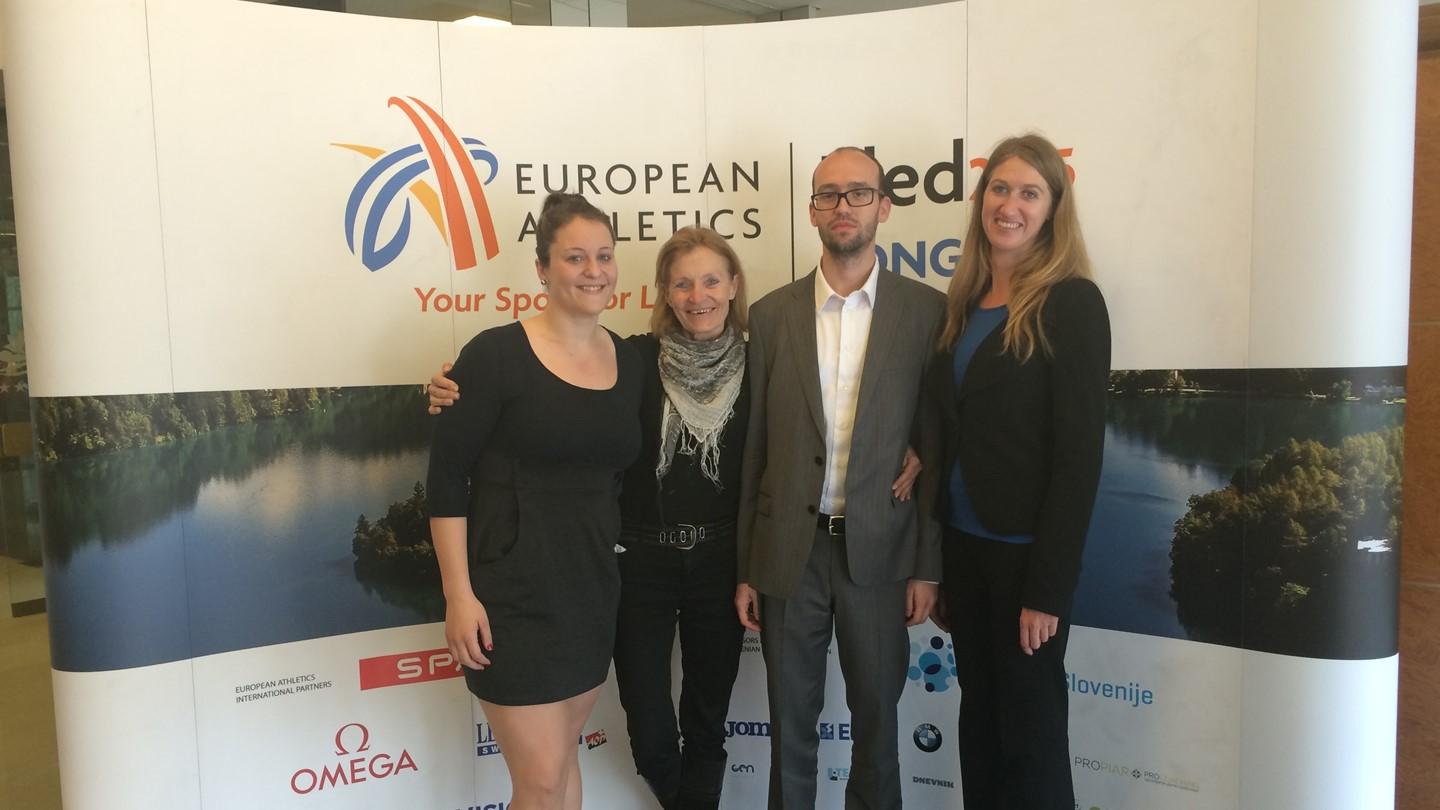 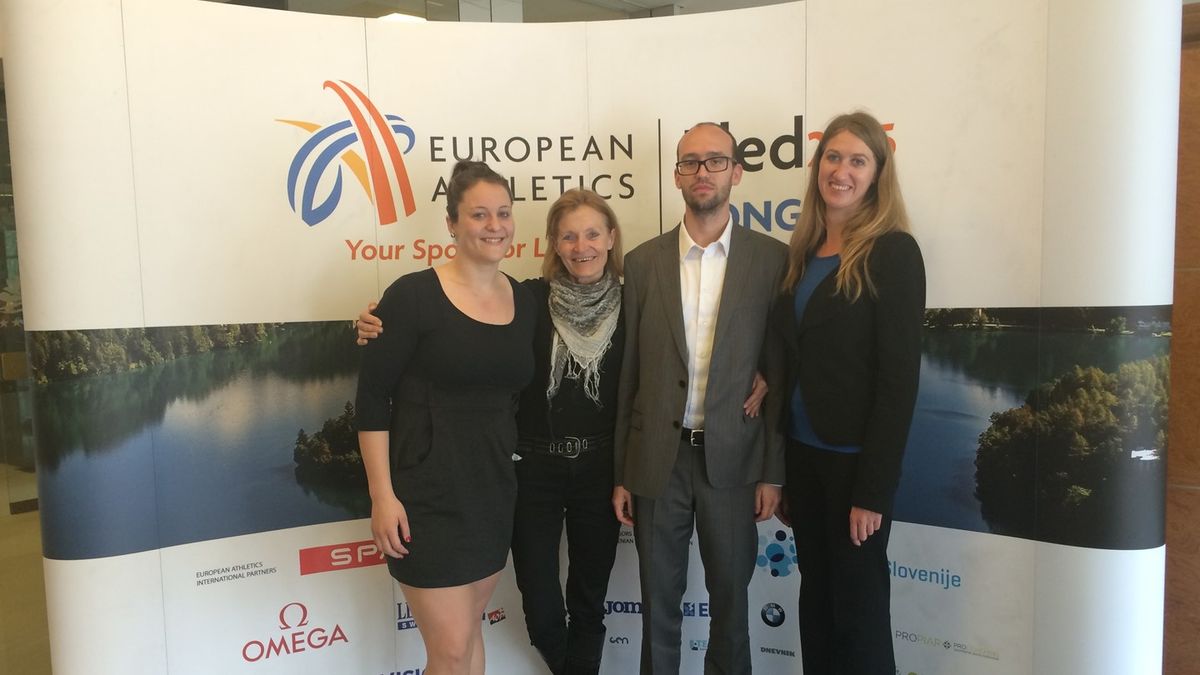 Spela Hus: 'Don’t give up and dream big!'

European Athletics continues its series of profiles of women’s athletics leaders across the continent by having a conversation with Spela Hus, from Slovenia, who has also been a leading figure in the European Athletics Young Leaders Forum in recent years.

I was 12 years of age and, truthfully, a chubby kid looking for a sport where I could be active. At 13, a teacher signed me up for a local athletics competition, and I won the shot put. I then won the regional title and actually qualified for the national championships that year but didn’t go as I had something else planned. However, my local club contacted me and asked me to join so that’s how my involvement with our sport started. Pure luck.

However, I have been in love with athletics ever since, and the sport has changed my life. I went to the European and World C20 championships – in 2007 and 2008 respectively – and then went to study in the USA at Utah State University on an athletics scholarship

How did you move into athletics administration?

A series of fortunate coincidences. I was competing at the European Athletics Team Championships in Lithuania in 2013 and the then president of the federation said that it was possible the following year's event was going to be in Slovenia and I said: 'I'd love to be involved but in the organising,' as I knew my competitive career was coming to an end.

After graduating in 2013, I returned to Slovenia and wanted to stay involved with sport. I was initially thinking about being a part-time volunteer as I had some experience working in the financial services industry and I worked on that year’s European Basketball Championships which Slovenia was hosting, but I also got in contact with the Slovenian Athletics Federation who I knew were looking for more people to work with them.

Shortly afterwards, in 2014, I started being involved in helping out with the Slovenian athletics federation and my involvement just grew and grew. At the start, I was working on international relations and later became the co-ordinator of the federation’s technical services.

After seeing how rewarding it was, I decided that I wanted to stay involved professionally. Working in athletics is highly rewarding, it has emotions that no other job can give.

Starting work for the federation also coincided with me finishing competing at the end of 2014 (Spela had been an international athlete and competed in various championships including the 2011 European Athletics U23 Championships and 2013 World University Games) but I wanted to stay in the sport and I quickly got the opportunity to be a part of some amazing international and national projects, including helping organise the 2015 EA Congress in Bled and the Balkanation competition that year.

You have also been involved with European Athletics Young Leaders initiatives. What did that involve?

I participated in 2016 European Athletics Young Leaders Forum in Amsterdam in 2016 as a facilitator, but I have been in the Young Leaders Senior Team since autumn 2014 and its head since January last year.

Amsterdam allowed me to meet some amazing people that have the same enthusiasm for athletics all over Europe through the Young Leaders forums and community, the Young Leaders are an amazing community and I plan on doing joint projects with similar-minded people on in the future.

In December 2019, I also became Europe's female representative on the World Athletics Youth Council. Its work has been halted due to the coronavirus pandemic, but I believe we are all very eager to start working again and I will be putting forward the European perspective in this arena.

What is your current involvement with athletics?

I am now currently the Executive Director for the Slovenian Gymnastics Federation, but I am in regular contact with the athletics and the swimming federation and looking at areas we can work together.

There are several different layers to our cooperation. The Federations can work together and talk about coordinating sports policies in order to talk to the government. Together, as they are among biggest sports in Slovenia, they can make a difference.

The federations come together to do some joint children’s camps in August to prepare them for the sport they will do at schools in the autumn.

Within this joint project, we offer camps and training plans for schools and especially for kids, to make sure the latter get a broad base and the best physical education so that they are able to successfully do whichever sport they want to pursue starting at ages of eight or nine. We are aiming to build a collective platform for success in all sports.

Separately from this, I am working with three Slovenian athletic clubs that have an ‘Athletics Academy’, where we aim to educate athletes aged 14 and older, and provide them with knowledge that will help them be better athletes now and more employable later in life.

I estimate that I still spend about 20 hours a month, maybe more, working in areas related to athletics.

If you had a message for women in athletics, what would it be?

Don’t give up and dream big. Believe in the people around you, your team; that’s so important. Your team is the key!