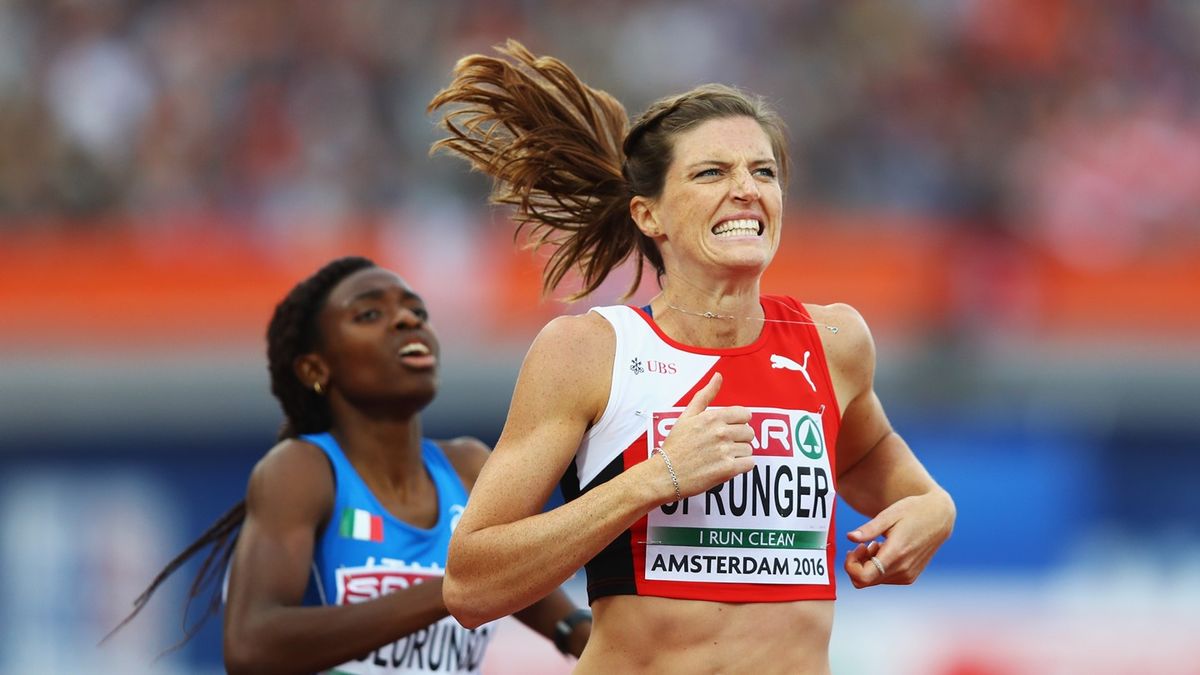 Lea Sprunger was delighted as she finally broke the Swiss 400m record on Sunday – a time which had stood for nearly 27 years – as the perfect present for her mother.

'The conditions were not optimal but I stayed focused on my race. It's a great gift for my mum's birthday,' said Sprunger, who moves up to second on the 2017 European list.

It was a good day for the home stars. Ahead of next week’s European Athletics U23 Championships in Bydgoszcz, Poland, former European junior and Youth Olympic Games champion Angelica Moser cleared 4.60m for a national U23 pole vault record.

It was big weekend of national championships and the importance in Britain’s second city of Birmingham was not lost on any athlete, knowing at stake was a place in a home world championships.

The start of the London 2017 IAAF World Championships is a month away tomorrow, the opening day being 4 August, and sprinter Nathaneel Mitchell-Blake will be heading there after a brilliant performance to win the 200m and smash the 30-year-old championship record as he won in 20.18 from Danny Talbot, who was second in 20.20.

John Regis had held the championship’s best time of 20.25 since Crystal Palace in 1987 but Mitchell-Blake is flying towards London.

However, 2014 European champion Adam Gemili is left waiting to see where he will figure in the overall team selection after finishing in sixth in 20.97 and suffering with a right thigh injury.

“I am so thrilled. I am only coming back from a tough year of injury in 2016 where things didn’t quite go so well, so to bounce back in this manner is so pleasing,” said Hylton.

There was equal emotion for her teammate Dina Asher-Smith, the 2016 European 200m champion from Amsterdam who was running for the first time this summer after breaking her foot.

Asher-Smith was sixth in the 100m final in 11.53 on Saturday, which 2017 European indoor 60m champion Asha Philip won in 11.21, but her dream of competing in London is still on as she might make the British 4x100m relay team.

Matthew Hudson-Smith produced another highlight with a 400m victory in a season’s best of 44.99, the second fastest time by a European this year.

In the men’s 100m, there was a surprise as European U23 list leader Reece Prescod won in 10.09 to book his world championship place ahead of 2014 European champion James Dasalou, second in 10.11.

Either Mitchell-Blake, who was has the best British 100m time of 9.99, or Chijindu Utah, who pulled out of the final with cramp but has run 10.02, are likely to get the third place for London.

Keeping it in the family

It a very much as case of family time at the national championships in Slovakia and Belgium.

At the 70th Slovakian Championships in Banska Bystrica, Marcel Lomnicky won the men’s hammer for a sixth time with 76.41m as his sister, Nikola Lomnicka, took her third title with a season’s best 68.59m.

Dana Veldakova won triple jump for a 15th time with 13.63m, her twin Jana triumphed in the long jump with 6.45m.

Elsewhere, in Trieste, Federico Cattaneo was crowned Italy’s 100m champion as he won in 10.24 and Lorenzo Vergoni ran a personal best of 49.36 to win the 400m hurdles.

In hot conditions at the Tofalia meeting in Patra, Greece, the Cypriot national 400m record was broken by Eleni Artymata who won in 51.61.
while Michaela Meijer improved the Swedish national pole vault record by one centimetre to 4.71m on the final day of the Varldsungdomsspelen meeting on Sunday.