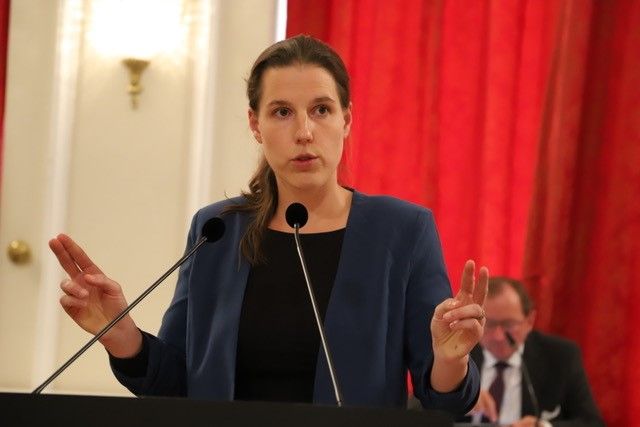 She is one of only a small number of women at the head of a national athletics federation in Europe.

How did you become involved with athletics?

I started being involved in athletics at the age of six thanks to a local club reaching out to my school and involving us in their activities and continued competing until I was about 20.

I was quite successful as a teenager but unfortunately, with my studies, I didn’t really have much time to stay involved and so stopped competing. However, athletics at that age gave me a lot of friends and I always stayed in contact with the sport. In fact, when I was young, my best friend’s father was actually the Luxembourg federation president.

A few decades later you are now the national athletics federation president. How did that happen?

After university (where she studied political science), I joined the army where I worked for the general staff. After that I was the head of my regional tourism office for six years. However, as mentioned, I always knew a lot of people involved in athletics from my own history in the sport.

I was elected to the Luxembourg parliament in October 2018 (as a member of the Green Party which is part of the ruling coalition) and became president of the Luxembourg athletics federation on 1 December 2018.

However, I had been asked before the parliamentary elections if I was interested in becoming president of the federation. I would not have applied directly myself to be president but when other federation officials asked me, I didn’t hesitate. I quickly agreed and now I’m very happy to be able to give something back to athletics.

How do you juggle both jobs?

Sleeping less! I also have two young children, and that doesn’t make things easier. Being the president of our national athletics federation is a voluntary position, but I was raised to believe that you should dare to do things and my background in both the army and tourism gave me a good understanding of how medium-sized companies work, and that is really what the federation is.

For many reasons, it is harder than ever to find volunteers to be involved in sports organisations, it is a challenge for many sports federations not just in athletics. However, it is also clear our federation needs to become more professional, so they are many things for me to do although there was already a good basis built before I became the president.

My first real involvement in this context was with the Women’s Leadership Programme Webinar Project this summer. It is worth noting that the Programme itself was already well-established before my first involvement.

I found it truly inspiring to get to know other women via the Webinar Project, find out about their characters, and take the chance to build a network. It is really interesting to see all these women coming from different positions – coaches, athletes, officials etc. – coming together and see what issues they face in these various positions. It has helped me reflect on what I individually, and what we collectively, can do better.

What are your hopes for the future with regards to the role and status of women in our sport?

In general, it is harder for women than men to progress and reach higher positions and this must change, not just in athletics. However, I am proud of the fact that within my federation there is a good gender balance with around 40 per cent of our officials being female.

In addition, although I did not personally experience any specific barriers to reaching my position (as president), I should say that it is harder to cope with the subsequent attention, with the media treating you differently than they would treat a man and I would encourage them to change their way of thinking.