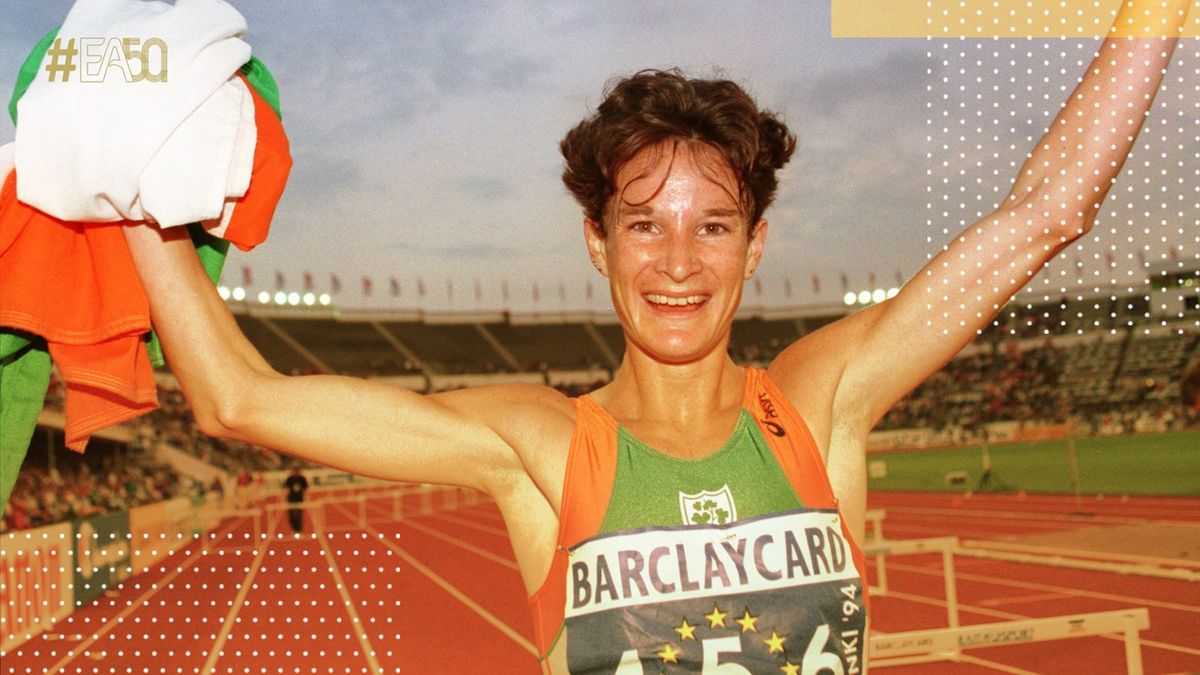 The path to a golden double at the Budapest 1998 European Athletics Championships began in a bookshop. It was July 1998, and Sonia O’Sullivan was browsing the aisles of a store in Nice when she came across a book about the history of the European Championships.

At the time, the Irish athlete’s plan was to focus on the 5000m at the European Championships in Budapest, then a little over a month away. But as she studied the roll of honour for the women’s 10,000m, the relatively modest winning times triggered an idea. “It was won every time with a fast last lap,” she says. “I thought: ‘Well, I only have to keep up.’”

Do that, she knew, and no one could out-kick her. O’Sullivan had never run a track 10,000m before and when she floated the idea to her coach, Alan Storey, and her agent, Kim McDonald, they had mixed views.

“When I gave Alan the idea he loved it, but Kim wasn’t so keen. He thought: ‘There’s no way she’ll be able to concentrate on that, she’ll lose concentration in the middle.’”

O’Sullivan brushed off those fears and went to Budapest with only one goal in mind: 10,000m gold. On that humid Wednesday night in the Hungarian capital, she quietly reeled off the laps behind a cluster of Europe’s best, a group whittled to six athletes with five laps to run after a surge from Great Britain’s Paula Radcliffe.

“It did get a little bit hard but it wasn’t far enough out that they could drop me,” says O’Sullivan.

Portugal’s reigning champion Fernanda Ribeiro hit the front with 300 metres left and O’Sullivan sauntered up to her shoulder as they entered the final turn. What happened next was best summarised by BBC commentator David Coleman: “There goes O’Sullivan and, in two or three strides, it’s all over.”

She hit the line in 31:29.33, having taken three seconds out of her rivals in the last 150 metres, an astonishing turn of speed which, by then, had become her trademark. That wicked finish was familiar to all who raced O’Sullivan, and indeed those who saw her train.

“At the end of every training session, it would always be a bit of a race,” she says. “We wouldn’t discuss it but it’d become a little bit of a game. Alan (Storey) and anyone who was standing around, they’d always be waiting. In my whole career I always believed your last rep of a session should be your fastest. No matter how tired you are, you could always lift for that last one.”

Only once 10,000m gold was secured did O’Sullivan think about doubling in the 5000m, which was four days later. Two days before that final, she went to a track on an island in Budapest and hammered a track session alongside Irish teammate Frank O’Mara. “That was probably a bit stupid,” she says now with a laugh.

Earlier that year, she had dominated the World Cross Country Championships in Marrakech, winning the lonf course race on the Saturday before doubling back for short course gold the next day. When the 5000m in Budapest got under way, she felt the same feeling of fatigue as she had on that Sunday in Marrakech.

“The start of the race was a reminder that, damn, you’ve got this lactic in your legs now and you’re managing that,” she says.

Her chief rivals were Romania’s Gabriela Szabo and Spain’s Marta Dominguez and Szabo took the lead from the outset, cutting out a steady pace on a windy day.

“I refused to go past her,” says O’Sullivan. “There was one point when Szabo moved out and looked around and she got really annoyed at me because I wouldn’t take the lead but I was like: ‘Hang on a second, this is a race, we’re not trying to help each other.’”

With a lap to run it was down to the big three, with Szabo leading O’Sullivan and Dominguez into the final turn. O’Sullivan waited a few ticks longer this time, shifting gears with 100 metres to run and powering clear to win in 15:06.50.

“It was pretty special,” she says. “The European Championships are so big in Europe, you’re the star for the day.”

She had been there before, of course, standing proud on the rostrum and watching the Irish tricolour ascend to the sound of her national anthem.

In 1994 O’Sullivan had gone to the European Championships in Helsinki as the overwhelming favourite for gold in the 3000m, having clocked a European record of 8:21.64 for 3000m and a still-standing world record of 5:25.36 for 2000m earlier that summer. But the path to that point had not been easy.

In response to the unfettered dominance of the Chinese runners, known as Ma’s Army, who swept the middle and long distance titles at the 1993 World Championships in Stuttgart, O’Sullivan had “trained the house down” in the build-up to 1994, breaking down with injury as a result.

But come the summer of 1994 she was back to her best. However, after racing seven times in seven different cities through July, she turned in a below-par effort in her final race before the Europeans in early August, finishing fifth over 1500m in Monaco in 4:03.54.

The Irish athletics press, which had come to see gold in Helsinki as a mere formality, began to sound the alarm bells. The day after that Monaco race O’Sullivan ran for an hour as hard as she could, followed with a bunch of fast sprints, trying to get that one bad run out of her mind.

“My instinct was always to train hard,” she says.

Before most major championships she tried to avoid interviews – “I always thought if you say anything you’re letting your rivals know what’s going on” – but this time was different.

The morning of the 3000m final in Helsinki, O’Sullivan went for a run alongside the lake near her hotel and began to visualise how the race would go.

“I said we’re either going to jog around and it’ll be a fast last lap or Yvonne Murray is going to take the lead and it’ll be hard for four laps, then it’ll be one on one,” says O’Sullivan. “I was ready to commit, no matter what. The soft option would be to jog around, but it was also high risk because there’d be a load of people (left on the final lap). But I knew if it came down to me and Yvonne, there was no way she was going to beat me.”

Murray took the lead after a lap and O’Sullivan immediately moved into her slipstream. One by one, the rivals fell away, including an 18-year-old Szabo, until it was between those two with four laps to run. O’Sullivan waited, then waited some more, before finally exploding past Murray with a half-lap remaining, clocking 8:31.84. Her last 200 metres were covered five seconds faster than Murray.

Of the many great moments in her career – the world title in 1995, world cross country double in 1998, Olympic silver in 2000 – that memory ranks right up there, her first major championships success.

“In the photos you see you can see the joy and excitement and it was definitely new to me then,” she says. “In 1995 (the world title) was more expected so it was more relief, but for this one I couldn’t have been happier. The fact some people were questioning whether I could do it added to it.”

She had silenced the doubters, and earned her place at the summit of European distance-running, one it would take O’Sullivan many years to relinquish.