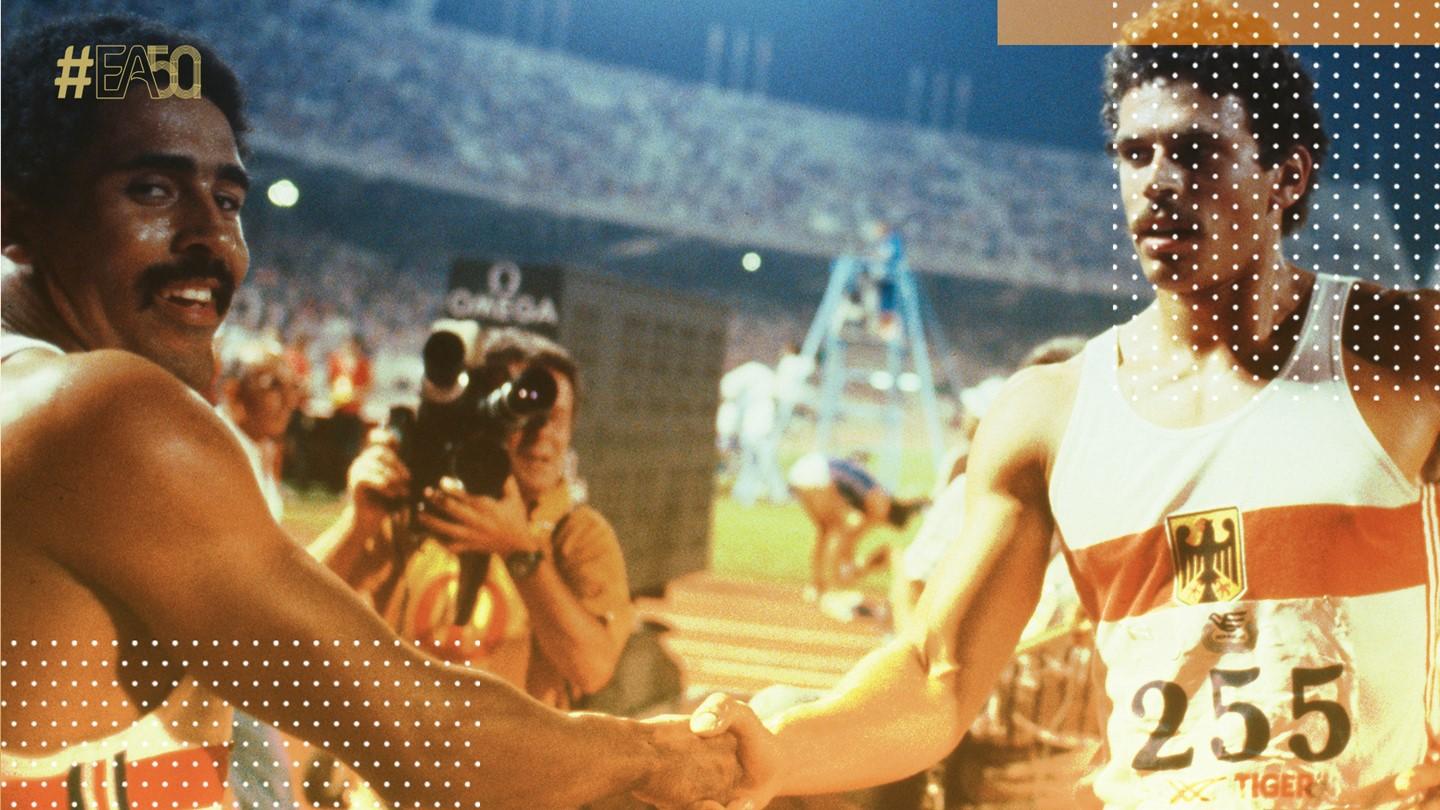 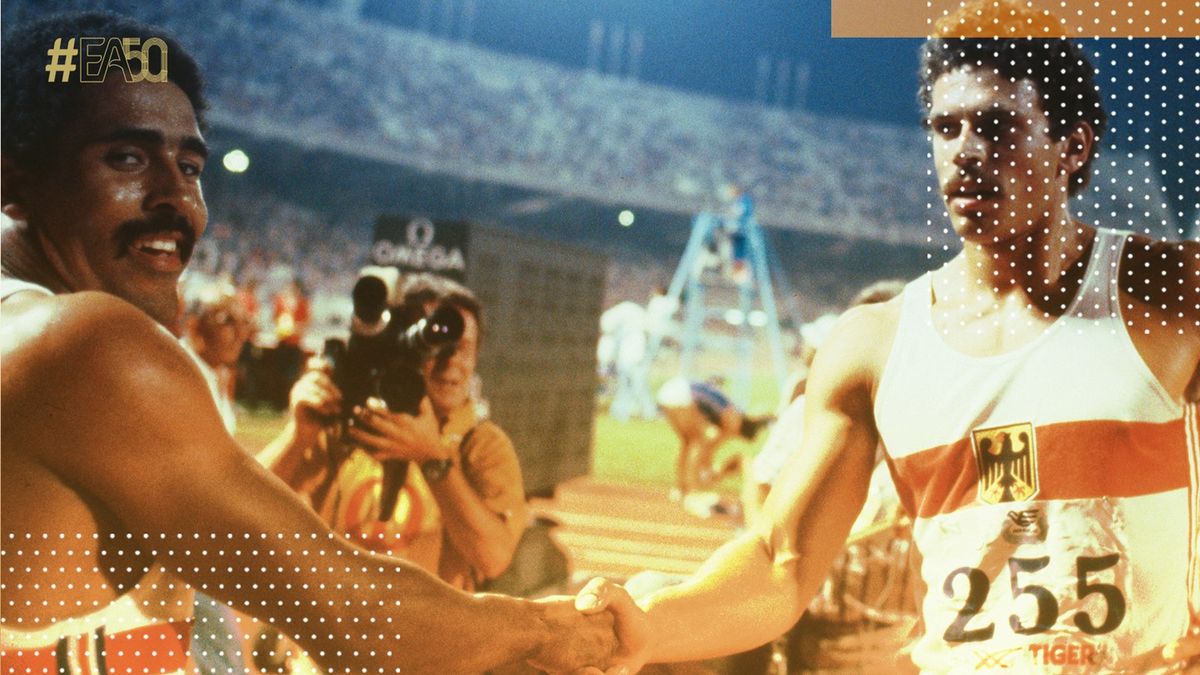 Thompson and Hingsen: how the kings of athletics shaped the decathlon

Ahead of the 1982 European Athletics Championships in Athens, the decathlon world record-holder Jürgen Hingsen shared his thoughts on the upcoming competition. “Daley and I are the kings of athletics,” he said. “But the media don’t give us the space we deserve. I’d like to change that.”

At the time, the German could not have known that the evolving rivalry with his British counterpart Daley Thompson would be synonymous with decathlon almost 40 years later.

Between them, Hingsen and Thompson would break the world record seven times between 1980 and 1984. And while Daley may have collected the gold medals at the major championships over the years, it was the twists and turns of their rivalry that made the moments golden.

Whether it be fuzzy childhood memories in front of a small family television, or the delight of vintage footage discovered online, one need only utter “Daley and Jürgen” to bring a gasp of recognition from even the most casual athletics fan.

Thompson and Hingsen first met in competition at the European U20 Championships in 1977 in Donetsk, and then the campaign that would last for the best part of a decade gathered pace in May 1980 in Götzis, at the world’s most famous decathlon. The competition in Austria was won by Thompson in his first world record of 8622, with Hingsen third in 8277. The pair were separated by Guido Kratschmer, the West German to whom they would lend the world record for two years.

A few months later, in July 1980, Thompson won the Olympic title in Moscow. West Germany’s absence from the Games meant that the duo’s first serious championship battle would not take place until two years later, at the European Championships in Athens in 1982.

As the summer of 1982 approached, Daley had recovered the world record from Kratschmer, overtaking the German’s score of 8649 with 8704 in Götzis, the first ever mark over 8700 points. But his achievement was short-lived, as Jürgen seized custody of the world record by 19 points in Ulm, the first time that he had held the record. As the European Championships drew near Thompson warned Hingsen not to get too attached to his status as world record-holder. “I can only hope that he suffers what I suffered,” Thompson said, “holding a world record for just three weeks.”

In the steaming heat of Athens, Thompson’s portentous warning seemed premature. The Olympic champion hurt his calf muscle only a few steps into the 100m, and while he was just a few hundredths off his best time with 10.51, the prospects of a performance at one hundred percent effort seemed unlikely. But a strong long jump and a lifetime best of 15.44m in the shot put contributed towards a 114 point lead for Thompson at the end of day one.

Hingsen was a man with a strong second day, and after two no-throws for Thompson in the discus, the German seemed poised to strike. But Thompson pulled out a final throw in excess of Hingsen’s and continued his charge towards the end of the competition.

While Thompson had victory in his sights ahead of the 1500m, Hingsen’s world record still seemed safe. With dogged determination, however, Thompson dragged himself round the last event in 4:23.81 to finish with 8743 points. Daley was the last man standing, with a gold medal, and with the world record back in his possession. For the time being.

Nine months later, Hingsen would stretch the limits of decathlon performance further to a world record of 8779 in Bernhausen, and again to 8798 in Mannheim a year later in June 1984.

Each encounter between Daley and Jürgen was an episode with a cliff-hanger waiting in the final scenes. Every conclusion brought with it a promise that the contest for positions on the podium, and ownership of the world record, would be played out again in a sequel. The contrast between the personalities of the rivals is well-known, but nowhere was the difference in their temperaments more apparent than in the platforms to which they each brought their best challenge.

Thompson’s mischievous swagger in his every run, jump and throw was amplified by the energy and glamour of the big stadium championships from which he collected his prizes. The towering, brooding presence - literally and metaphorically - of Hingsen was more at home in the modest domestic environs of Ulm, Bernhausen and Mannheim, where he set his world records in 1982, 1983 and 1984 respectively.

And so, the pair found their way to Stuttgart, for the 1986 European Championships and what was to be the final showdown between the decathlon titans before yielding their dominance to the younger men behind them. The 1984 Olympic gold medal had gone to Thompson, in a performance which also brought the world record back to the Briton, by way of a recalibration of the scoring tables.

But Stuttgart was home soil for Hingsen, in Germany, where he had always performed his best. Would that give him the advantage, or would the energy of the crowd – albeit one partisan towards their own – fire up Thompson’s competitive spirit?

As in Athens, Thompson started strongly with 10.26, a world 100m decathlon best. But he yielded precious points to Hingsen in the jumps – 7.72m to Hingsen’s 7.89m in the long jump and only 2.00m to the German’s 2.12 in the high jump. Although Thompson redeemed himself with a lifetime best of 15.73m in the shot, Hingsen took full advantage of his superior skills in the third event, going out to 16.46m. While it was expected Thompson would lead at the end of day one, the Brit only did so by 28 points.

Hingsen was set up to take advantage of his stronger day two, but nothing went to plan, for either decathlete. Thompson started with a lifetime best of 14.04 in the hurdles, with Hingsen almost half a second behind. The German had the stronger discus and javelin, but had a poor pole vault, clearing only 4.60m to Thompson’s 5.10m. Thompson finished five seconds behind Hingsen in the 1500m but 81 points ahead to retain the title, in a championship record of 8811 – a record which will be 36 years old when the next European Championships decathlon is contended in 2022.

The young athletes who watched the battles between these grand decathletes of Europe would go on to be those who dominated the event in the 1990s and 2000s, pushing each other on to 9000 points and beyond. They would bring their own dynamics and competitive temperaments, as they took their turn to navigate global titles and world records. The consistency of the first man over 9000 points Roman Sebrle; the precision of the double Olympic champion Ashton Eaton; and the passion of current world record holder Kevin Mayer, whose 9126 came just months after his own dramatic competition at the 2018 European Championships in Berlin.

Daley’s honour as the world’s fastest decathlete now rests with world bronze medallist Damian Warner from Canada. The sublime 2.10m plus high jumping of both men is mirrored by the world silver medallist Maicel Uibo. And the crescendo of Jürgen’s thundering final two events echoes in the decathlon of the current world champion, fellow German Niklas Kaul.

Almost four decades after the glorious era of Thompson v Hingsen, the legacy of the kings of athletics lives on.