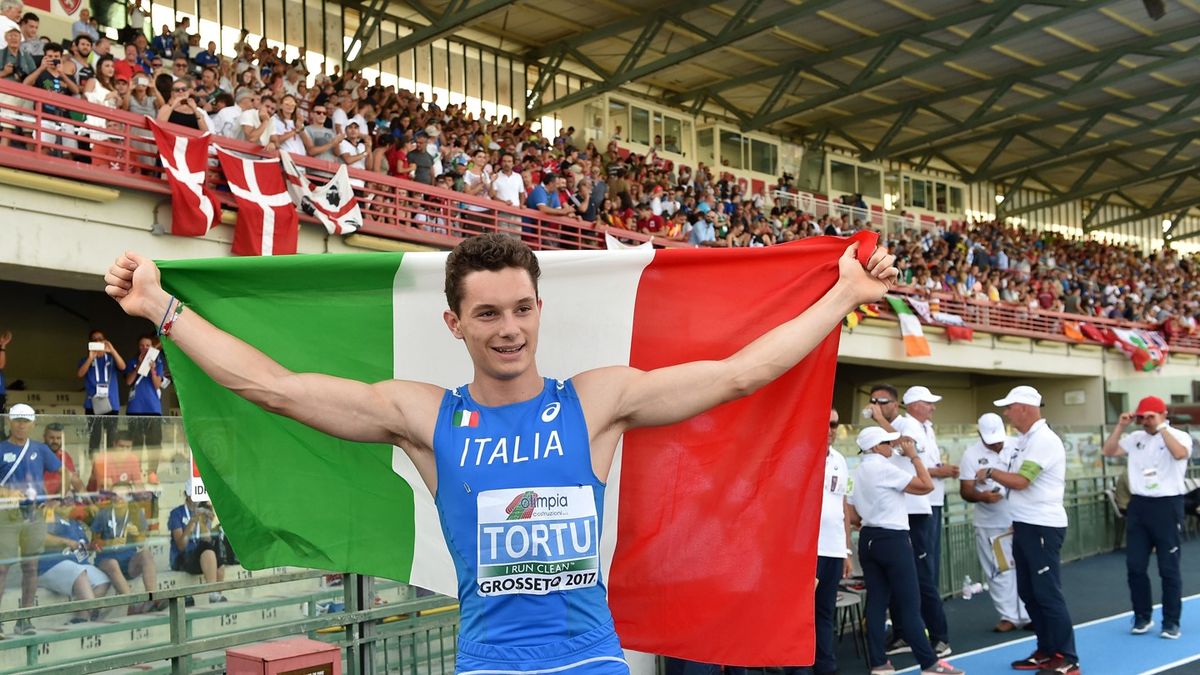 Filippo Tortu was aiming before the championships to break his Italian U20 record of 10.15 in the 100m final but times were irrelevant on a windy evening inside the Carlo Zecchini Stadium on the second evening of the European U20 Athletics Championships in Grosseto, Italy.

The finalists had to contend with a headwind of 4.2 m/s but the formbook more or less played out with Tortu roared to the victory in 10.73 ahead of Finland’s Samuel Purola - the youngest of the eight finalists at 17 - in 10.79 and Oliver Bromby from Great Britain taking bronze in 10.88.

“Before the start I wasn't thinking about anything - I just felt like running.The only important thing wasn't the time but the place and I'm very happy for that. The start today was better than the other one,” said Tortu, who became the first Italian winner of the U20 100m title.

Italy's @FilippoTortu storms to the European U20 100m title on home soil in Grosseto! #Grosseto2017 pic.twitter.com/C7Gw1e2N6Q

Tortu has opted to miss the 200m in order to focus on the 4x100m relay but the 18-year-old, who has a 20.34 lifetime best, will contest the longer distance at the World Championships in London next month.

There was also a first in the women’s 100m final as Gina Akpe-Moses claimed an historic gold medal for Ireland.

Akpe-Moses won a silver medal at the European Athletics U18 Championships in Tbilisi, Georgia last summer behind Germany’s Keshia Kwadwo but the medal positions were reversed as the long-striding Irishwoman came through over the second half to claim gold in 11.71 to Kwadwo’s 11.75.

“I hoped to get a medal, and eventually the dream came true. In the semifinals I started thinking I could jump on the podium but only in the last 20 metres of the final I had the thought: ‘I can get the gold medal,’' said Akpe-Moses, who still has another full season left in the junior ranks.

Norway’s Ingvild Meinseth was fastest out of the blocks and still led at the 60 metre point before being passed by Akpe-Moses and Kwadwo but the 18-year-old held on for a poignant bronze medal.

“This medal is so special to me, I didn't expect this victory at all, it was a good race indeed. I want to dedicate this medal to my grandpa who died and also to a friend of mine who lost his life last year,” she said.

Norway’s Marcus Thomsen trailed Poland’s Szymon Mazur on the world U20 shot put lists by two centimetres but the outcome in the final was decidedly more clear-cut than on paper with the Norwegian winning by more than half a metre.

Thomsen surpassed Mazur’s world U20 lead in the second round with 21.36m - a mark which proved more than sufficient for the gold medal. After a lethargic start, Mazur moved into silver medal position with his third throw of 20.70m but he couldn’t make any more of an impression on the Norwegian’s lead.

“I'm a bit disappointed because I could get the gold medal. But I had some technical troubles and I felt a bit sick,” commented Mazur.

European U18 champion Odisseas Mouzenidis from Greece almost surpassed Mazur for silver with a national U20 record of 20.67m in the fourth round. The medal positions remained unchanged from this point onwards, although Thomsen did have a no-throw which looked in excess of his world U20 lead.

The medal positions seesawed throughout a pulsating triple jump final and it was all change again as the competition reached its climax.

Bulgaria’s Aleksandra Nacheva moved into bronze ahead of Great Britain’s Naomi Ogbeta with a lifetime best of 13.64m in the fifth round but Ogbeta showed her competitive zeal by producing the longest jump of her career - a wind-aided 13.68m - to usurp Nacheva and regain the bronze medal position.

The Brit produced the longest jump of her career in the sixth round of the triple jump to claim bronze. pic.twitter.com/dz9SvZtonR

Early leader Violetta Skvartsova from Belarus was pushed into silver in the fourth round after France’s Ilionis Guillaume went out to a slightly wind-aided 13.97m, bettering Skvartsova’s early lead by three centimetres.

Skvartsova almost immediately regained the lead with 13.95m in the fifth round but with the very last jump of the competition, the 19-year-old caught a 2.4 m/s tailwind and bounded beyond the 14m line with an excellent under pressure effort of 14.21m.

What an effort!
With the last jump of the final, Violetta Skvartsova moves from silver to gold in the triple jump with 14.21m! #Grosseto2017 pic.twitter.com/NmT5hibC4I

Czech Republic’s Nikol Tabackova continued her country’s fine tradition in the javelin, winning the title with her third round throw of 55.10m. Carolina Visca claimed silver for Italy with 53.65m while Elina Kinnunen from Finland, another superpower of the event, won bronze with 52.94m.