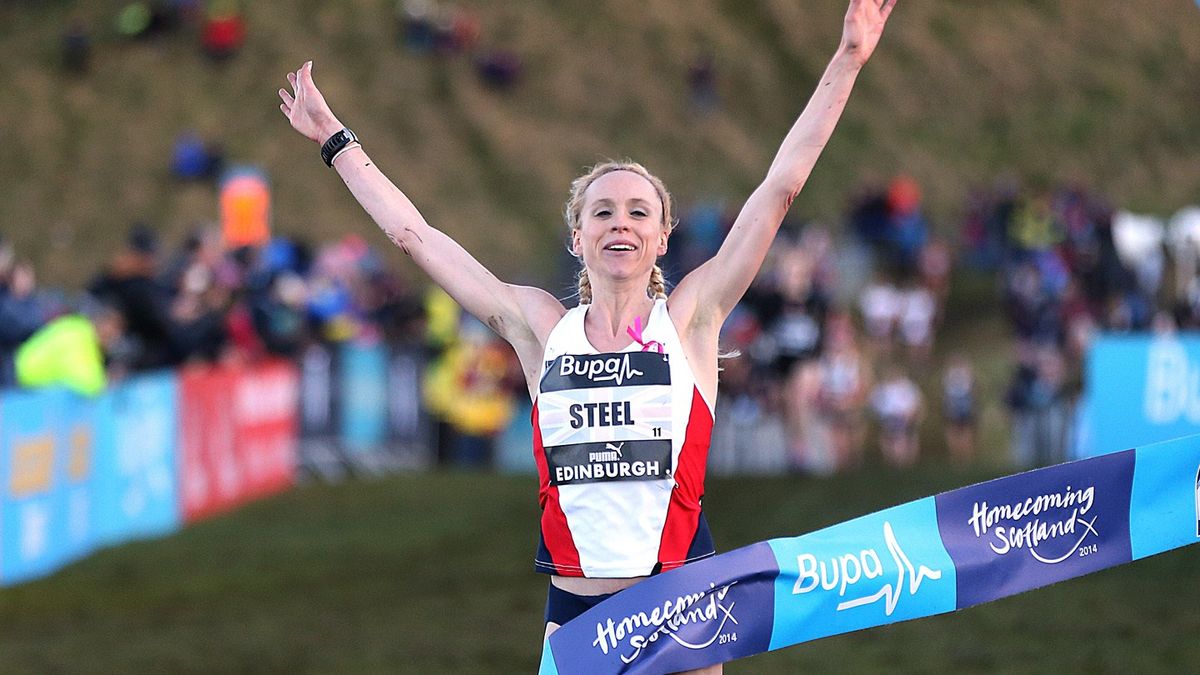 A touch of Steel pays dividends

The 25th Bupa Great XCountry took place on Saturday in the magnificent setting of Holyrood Park in Edinburgh. It was the first major cross-country event of 2014, a match between the hosts, Team GB, Team Europe and Team USA.

Just a month after the SPAR European Cross Country Championships in Belgrade, many of the stars from that day were back in action in a match of four races - senior and junior men and senior and junior women over a course of 2km a lap. The top six finishers from each team earned points for their side, and this is the story of a tremendous competition.

A dramatic finish to the first race of the day as Frenchman Alexis Miellet led Team Europe to a one-two from Italy's Yemaneberhan Crippa.

But as Miellet won in 19:07, he quickly went over to Crippa to apologise for an extraordinary incident in the final 25 metres.

Miellet was leading with Crippa just behind before he misjudged where the tape was and diverted across to a railing in the side of the home straight.

Crippa followed him before they both realised that was not the line, with Miellet moving to his left to stay on the course as the Italian hit the fence. He recovered but not in enough time to overtake Miellet who had crossed the line.

As Crippa stood bent over as he finished second in 19:07 - had the race stayed true to the course the Italian might have won - Miellet put his arm around him to console him for leading him astray.

It had been an eventful race for Crippa throughout because on the second of the three laps he fell as Miellet and him were the front two. He quickly picked himself up and had fully recovered, making up the ground before that final twist.

The outcome, though, gave Team Europe a fine start to the day with American Michael Maton third in 19:16.

Match score after one event

Team Europe found themselves still in front after the second event but their lead had been cut after a race which belonged to one family in the Great Britain team.

Bobby Clay, 16, triumphed ahead of her elder sister Alex, 18, with Lydia Turner completing a British clean sweep ahead of Poland's Sofia Ennaoui in fourth.

It was a fine performance from Bobby, who remained at the front for most of the two laps, with Turner alongside her before Alex came through to take second.

They never allowed Team Europe to make too much of an impression as Bobby won by four seconds in 13:59 from Alex with Turner recording a time of 14:10 and Ennaoui fourth in 14:13 with the next best Team Europe runner being Johanna Geyer-Carles, of France, who was eighth in 14:28.

It meant Team GB won 11 points from Team USA with 39 and Team Europe with 40 as the senior races beckoned with the match score leaving the competition wide open.

As Team Europe looked to stay in front of the overall competition, the race became a one-man show with a brilliant performance from Team USA's Chris Derrick.

Back in Belgrade, Spain's Alemayehu Bezabeh won gold in the men's senior race but he could not make an impression this time.

Abdi did move in front of Vernon before the Briton regained second, yet neither troubled Derrick who won in 24:11.

Vernon was second in 24:21 with Abdi third in 24:27 but Team Europe held on to first place with some fine finishers.

Ireland's Michael Mulhare was fifth in 24:32 with Belgium's Pieter-Jan Hannes, the under-23 champion in Serbia, seventh in 24:45.

Those good positions kept Team Europe in front as they scored 53 points in this race with Team USA scoring 55 and Team GB with 63.

Team Europe did their best to stay in front in the event but the match was won by Team GB ironically thanks to two of Europe's leading cross country runners, Gemma Steel and Emelia Gorecka.

Both Steel, the Team GB captain, and Gorecka arrived here after an outstanding end to 2013 at the SPAR European Cross Country Championships in Belgrade.

It was there that Steel, 28, won silver behind France's Sophie Duarte while Gorecka, who is 20 this month, bowed out of the junior level of the sport by retaining her title.

This beautiful, crisp sunny afternoon in the Scottish capital was Gorecka's senior debut and what a way to start as she finished third to earn the team valuable points.

Steel was always in the lead pack and on the second lap asserted her strength as she looked determined to beat Duarte this time. At the bell the Frenchwoman was five seconds behind her in fifth before the Briton stretched her lead from Gorecka and Ireland's Fionnuala Britton, the double SPAR European Cross Country champion.

She was looking behind her as the finish drew nearer but there was no need because she was never going to be overtaken, winning in 20:35 from Britton, who had come through in the latter stages to pass a tiring Gorecka, with the Team Europe runner finishing second in 20:44.

It was a brilliant team performance, totting up 35 points for the race as Team Europe scored 62 and Team USA 89 to change the overall position from before this race.

In the end it was victory for Team GB, but some great signs ahead for the future for both them and Team Europe and an excellent way to begin 2014.