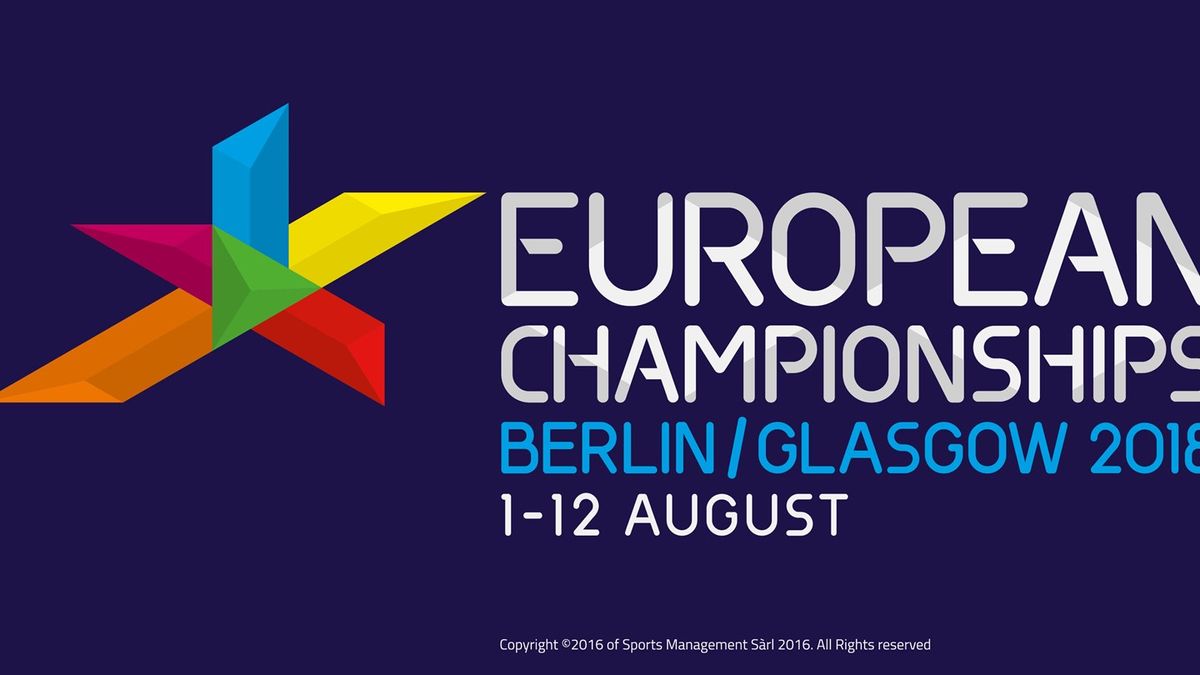 A unifying and vibrant brand has been launched by the participating sports to promote the new European Championships which will be staged for the first time in Berlin and Glasgow in 2018.

The dynamic Mark of a Champion is the star-like logo representing the vision at the heart of the multi-sport championships brand – to create a must-attend, must-watch experience that elevates the status of European Champions.

The inspiring shapes and colours of the logo - created in partnership by the sports, Host Cities Glasgow and Berlin and broadcast partner the European Broadcasting Union (EBU) - come together to represent the defining moments that create champions.

The multi-sport event in 2018 will bring together the existing European Championships of athletics, aquatics, cycling, gymnastics, rowing and triathlon, and also introduces a new golf team championship onto the European stage.

This new sporting partnership will create a strong event on the world stage every four years, attracting a projected television audience of around 1.03 billion and an even wider audience via multiple digital and radio platforms.

Around 1500 athletes will compete in Berlin through 7-12 August as part of the European Athletics Championships, while approximately 3025 athletes will visit Scotland for the other six events between 1 – 12 August.

As part of the brand development process, the name of the event has been shortened from the previous working title of 'European Sports Championships' to the ‘European Championships'.

Each sport will also unveil their own event logos in the coming months, inspired by the Mark of a Champion.

Fellow co-chair Paolo Barelli, President of the Ligue Européenne de Natation (European Aquatics), said: “This brand encapsulates everything we want to see in 2018 which will be an inspiring and ambitious event that showcases the prestigious history of the European championships of all our sports and provides us with a fresh and dynamic stage on which to elevate our champions.”

Jamie Hepburn, Scottish Government Minister for Sport, said: “I’m delighted that the Scottish Government has been able to support the 2018 European Championships. This is a totally new concept in European sport, so it’s tremendous that we can be at the forefront of that, welcoming all these world class athletes to Glasgow, and other venues across Scotland. We have a growing reputation when it comes to hosting major events like this, and I’m sure the people of Scotland will embrace these championships as only they can.”

Councillor Frank McAveety, Leader of Glasgow City Council, said: “I am delighted that Glasgow’s vibrant personality shines through this new brand. We have worked together with these amazing sports to create something that reflects all of our values by embracing our ambition, our strength in unity and our ongoing journey to provide opportunities for all of our citizens through the power of sport and culture.”

Senator Frank Henkel, City of Berlin, said: “Berlin is very proud to be host of the 2018 European Athletics Championships. More than 1,500 athletes from 50 countries will be welcome to the famous Olympic Stadium in Berlin. Today we are really pleased to see the unveiling of the umbrella brand for the European Championships of which we are part. Our city is well underway in its preparations for the European Athletics Championships, and our own Berlin 2018 mark will be unveiled soon.”

ABOUT THE 2018 EUROPEAN CHAMPIONSHIPS BRAND

To create a must watch, must attend experience that elevates the status of European Champions

We will celebrate the defining moments that create Champions

5. Our logo and wordmark:

The Mark of a Champion is unique and ownable. The collection of shapes and colours brought together in a dynamic star-like form represent unity as the sports and host cities come together to create an inspiring event that is greater than the sum of its parts. An event that is ambitious, accessible, authentic and challenging.

Using vibrant and dynamic shapes and colours it encapsulates the essence of the brand – the defining moments that create Champions. The logo represents ‘the moment’, the event tagline.

The colours have been chosen for their vibrancy and their association to the sports and host cities.

Aligning the Mark consistently at 30Ã‹šangles creates natural leading lines to the eye and achieves balance.

The wordmark typeface has been hand crafted to encapsulate a competitive edge represented by the unique and ownable cuts in the lettering and the inclusion of the star-like shape.

1. The 2018 European Championships will be staged by the European Federations and the Host Cities of Glasgow and Berlin.

3. The European Broadcast Union (EBU), the umbrella body for Europe free-to-air channels, will be the broadcast partner for the Championships. The event is expected to generate a television audience of around 1.03 billion with many more viewers across multiple digital platforms.

4. Around 3025 athletes will travel to Scotland as part of a total delegation of around 8500 including officials, media and others. A further 1500 athletes will compete in Berlin.

5. Berlin's Olympic Stadium will be the venue for the European Athletics Championships with the road races and race walking events held throughout the city.

7. Four European Cycling Championships will be staged in Glasgow. Track, Road, Mountain Bike and BMX will attract 650 of Europe’s top names to the Sir Chris Hoy Velodrome, the Cathkin Braes Mountain Bike Trails, the streets of Glasgow and a new world championship and Olympic standard BMX track to be built in the Knightswood area of the city.

10. The European Championships for both Rowing and Triathlon will both be staged at Strathclyde Country Park in North Lanarkshire.