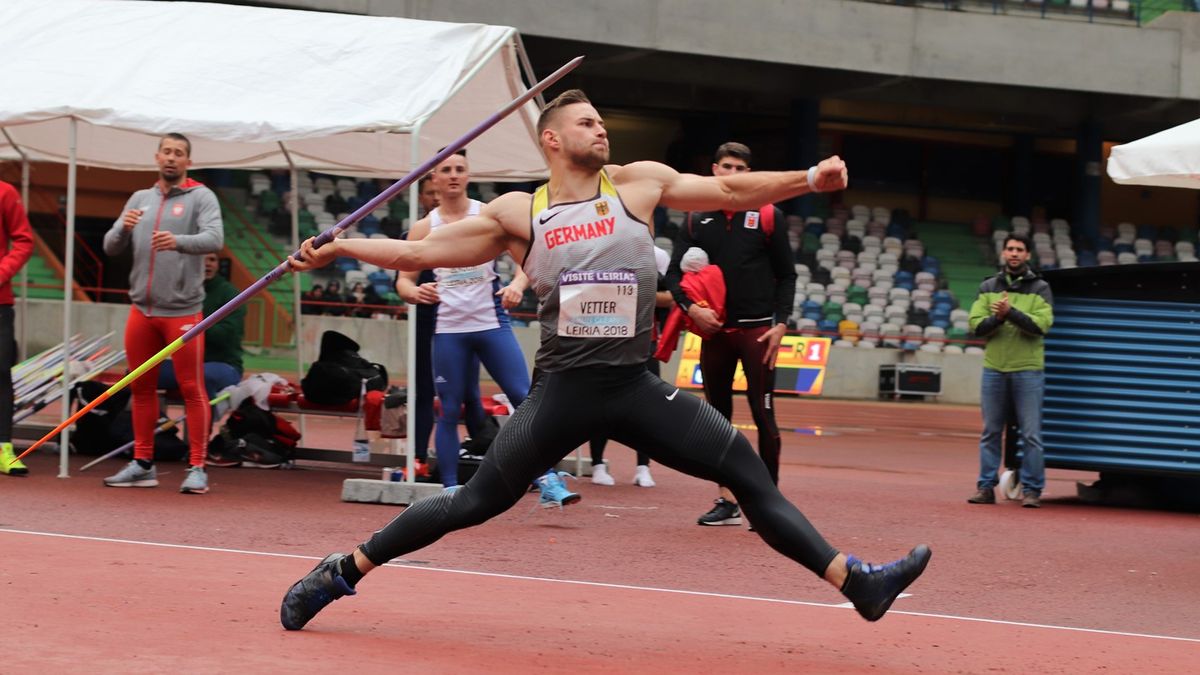 World javelin champion Johannes Vetter proved he is a man for all seasons as he twice broke the competition record, ending with a world-leading mark of 92.70m to win the European Throwing Cup on a damp late afternoon in Leiria, Portugal on Sunday (11)

Never mind the conditions, Vetter produced a performance that might still be talked about when the sun shines on the Olympic Stadium in Berlin in August as the German capital co-hosts the first multi-sports European Championships with Glasgow.

By then, who knows how far Vetter will have reached after sailing through the 90m for the second time this winter. After his 91.22m in Potchefstroom last month, Vetter chose the fifth round of a competition he dominated from the outset to show just how much he is in a class of his own.

Vetter rewrote the record books for the second time having thrown 88.28m in the third round to smash the championship record of 85.58m set by his fellow German Julian Weber last year.

Johannes Vetter's winning throw of 92.70m at the European Throwing Cup in Leiria, Portugal is all of the below.

On this occasion, he reached a sensation mark of 92.70m - the 12th longest throw in history - which is over 12 metres in excess of the European Championship qualifying distance of 80m – with the Berlin spectacular still five months away.

To quantify the standard of Vetter's throwing, the only time anyone has thrown this far this early in a season was in 1997 when the Czech Republic’s world record-holder Jan Zelezny reached 94.02m. Between 2012 and 2014, not one athlete surpassed the 90m line.

Vetter has now achieved that landmark twice before many of his rivals have even competed, demonstrating how he has maintained his amazing from last year which led to him being crowned as the male European Athlete of the Year at the Golden Tracks award ceremony in Vilnius, Lithuania in October.

All five of his valid throws would have sufficed for the victory. After beginning with a no-throw, Vetter set the standard in the second round with 85.57m before breaking the championship record for the first time with 88.28m in round three. After 84.29m in the fourth round, Vetter then produced his standout throw in the fifth round before concluding his afternoon with 82.80m.

Not only did Vetter add nearly seven metres to the championship record, the world champion won the competition by a massive 12 metres from fellow German Bernhard Seifert (80.62m) and the Netherlands’ Mart Ten Berge (79.92m).

Earlier in the day, Romania’s Alexandru Novac turned the tables on reigning European U23 champion Norbert Rivasz-Toth from Hungary to win the U23 javelin competition.

In Bydgoszcz last July, Rivasz-Toth won gold as Novac finished fourth but it was different this time – even if the Romanian left it late.

Reigning European U20 champion Cyprian Mrzyglod from Poland stepped up in age group to finish a fine third with a second round throw of 74.55m.

While he might not be operating at Vetter’s remarkable level, Aleksandr Lesnoy also put down a good marker with the European Championships approaching to win the senior shot put with the fourth best effort in the world.

Lesnoy, an Authorised Neutral Athlete, won with a second round throw of 21.32m and had a fine series in a good quality competition, triumphing from Poland’s Michal Haratyk with 21.18m. Defending champion Mesud Pezer from Bosnia & Herzegovina had to settle for third with 20.71m, although that throw was two centimetres in excess of his winning distance last year.

In Grosseto last summer, Norway’s Marcus Thomsen won the European U20 gold medal with 21.36m with the 6kg implement. Now competing at U23 level, Thomsen won the U23 competition in Leiria with 19.61m with the 7.26kg shot.