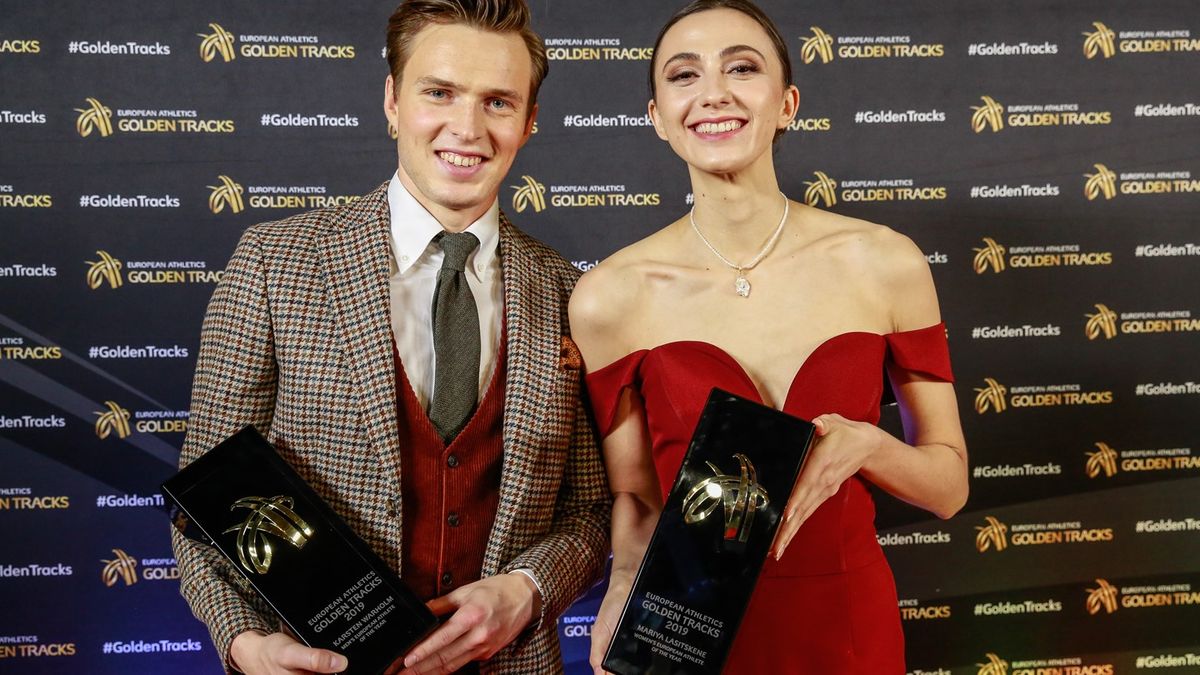 Karsten Warholm from Norway and Authorised Neutral Athlete Mariya Lasitskene were crowned European Athletes of the Year at the annual Golden Tracks award ceremony which took place in Tallinn, Estonia on Saturday (26).

Warholm, who broke the European record in the 400m hurdles three times in 2019, was shortlisted for the men’s trophy alongside fellow world champions Pawel Fajdek from Poland and Daniel Stahl from Sweden as well as Estonia’s Magnus Kirt, the world leader in the javelin. Warholm became only the second Norwegian winner of this accolade on the men’s side after his mentor Andreas Thorkildsen in 2008 and he was presented with the trophy by European Athletics President Svein Arne Hansen.

“My plan is to keep up the good work. I know that achievements are made in training and this is where I will put in the good work,” said Warholm as a preview to the 2020 season in which he will be aiming for Olympic gold in Tokyo and a second European 400m hurdles title in Paris.

Warholm successfully defended his world 400m hurdles title in Doha and ran the second fastest time in history with 46.92 in Zurich.#GoldenTracks pic.twitter.com/THwpoGCEID

On the women’s side, Lasitskene was part of an all-star shortlist which also included reigning world and European champions Dina Asher-Smith from Great Britain, Malaika Mihambo from Germany and the Netherlands’ Sifan Hassan. Lasitskene duly became the third female high jumper to win this award after Croatia’s Blanka Vlasic in 2007 and 2010 and Spain’s Ruth Beitia in 2016.

“It is a huge honour to win this award and be recognised as the Athlete of the Year by European Athletics,” said Lasitskene. “It has been a great year for me and it was a thrill to become the first high jumper to win the World Championships on three occasions.”

Warholm and Lasitskene are also past recipients of the Rising Star trophy, an award which came into being in 2007 to recognise exceptional young athletes. This year’s winners were Niklas Kaul from Germany and Yaroslava Mahuchikh from Ukraine, two of the breakout European performers at the IAAF World Athletics Championships.

Kaul won his fourth major age-group title in the decathlon at the Gavle 2019 European Athletics U23 Championships which sealed his berth on the German team for Doha where he became the youngest ever world decathlon champion, scoring a European U23 record of 8691 points.

At 21, Kaul became the youngest ever winner of the decathlon title at the World Championships in Doha.#GoldenTracks pic.twitter.com/u6Ch13Xes5

After winning gold at the Boras 2019 European Athletics U20 Championships, Mahuchikh became the youngest ever field event medallist in World Championships history. She won silver in the high jump behind Lasitskene less than two weeks after celebrating her 18th birthday, clearing world U20 records of 2.02m and 2.04m. The Ukrainian is still a junior in 2020 as well.

At 18, Mahuchikh won high jump silver at the World Championships in Doha with a world U20 record of 2.04m. #GoldenTracks pic.twitter.com/SROo2jG8Kn

The Golden Tracks award ceremony also serves as a platform to recognise and celebrate individuals who have made a laudable and long-standing contribution to athletics away the field of play.

The first of the annual European Athletics Coaching Awards which will be awarded to 35 coaches representing 23 Member Federations this year were presented to Estonian coaches Liivi Eerik and Valter Espe in recognition of their outstanding services to the sport.

The highly respected Estonian statistician Erlend Teemägi was the first recipient of the European Athletics Member Federation Award while Belarus’ Maryia Badzich was also presented with the Women’s Leadership Award, the biennial award which was inaugurated in 2009 to acknowledge outstanding women leaders in athletics.

Badzich was one of 17 women to be nominated by their Member Federations for their distinguished contribution to the sport. She was presented with her prize and artwork in Tallinn and the remainder of the award winners will be acknowledged at domestic award ceremonies later this year.