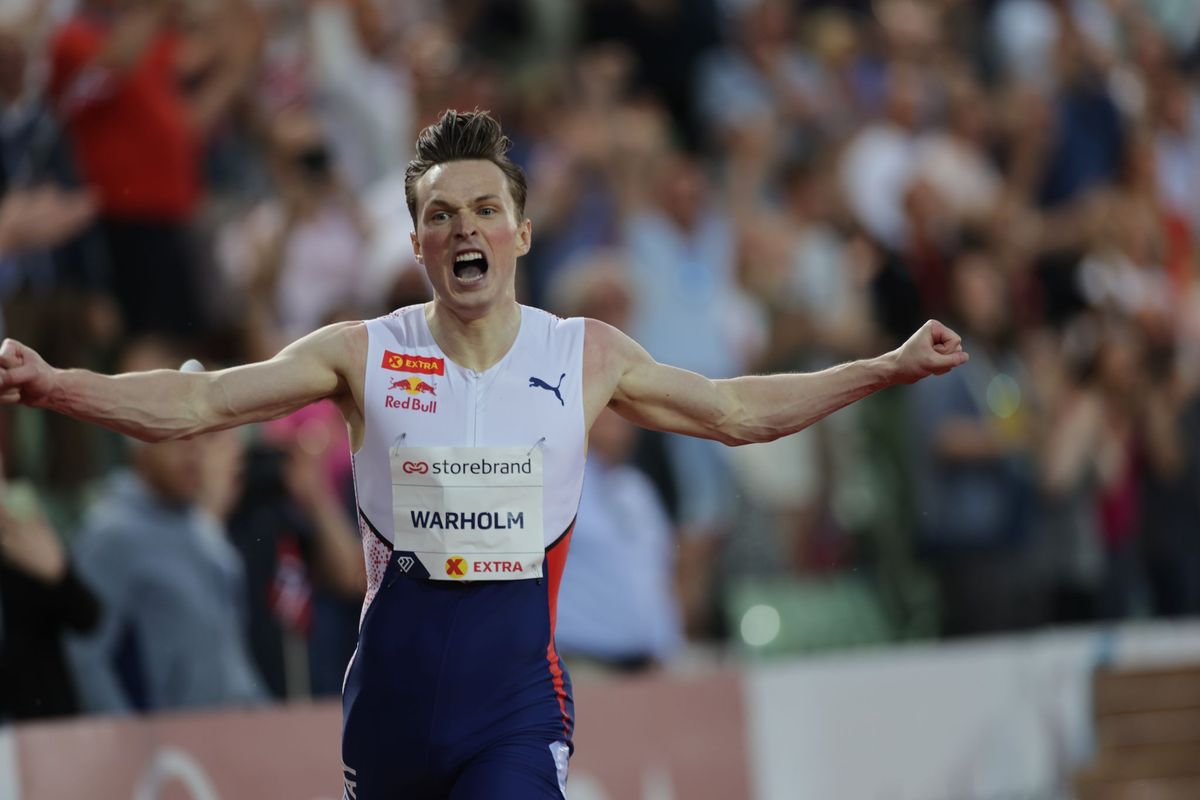 Four years after making his breakthrough in the 400m hurdles with victory at the Bislett Games in Oslo at the age of 21, Norway's former combined eventer Karsten Warholm broke Kevin Young’s world record of 46.78 on the very same track in front of his home audience in the Oslo Diamond League on Thursday (1) evening with 46.70.

A crowd of 5000 spectators were already on their feet in anticipation as Warholm readied himself in his blocks for his first race at the distance since his abbreviated albeit stellar 2020 season which was highlighted by a European record of 46.87 in Stockholm.

Warholm was left to ponder what might have been had he not clattered the final barrier on that afternoon in the Swedish capital but the reigning world and European champion didn’t make any such mistakes this evening.

Running from his favoured lane seven, Warholm combined his redoubtable flat speed with his much improved stride pattern and technique over the barriers to take down a world record which had stood since the 1992 Olympic Games and had appeared seemingly untouchable at times in the ensuing three decades.

Warholm gave notice of his scintillating shape by decimating his world 300m hurdles best on this same track last month with 33.26, shaving more than half-a-second off his previous best which was set in the exhibition-style Impossible Games in Oslo last year. Both of those performances were achieved in near-deserted stadiums but with coronavirus restrictions beginning to ease in Norway, Warholm fully embraced the chance of running in front of a live audience in his home country for the first time since the pandemic struck.

Following the obligatory photographs next to the trackside clock and other assorted formalities, Warholm donned his famous mock Viking hat before embarking on an emotional and euphoric victory lap around the perimeter of the Bislett Stadium, posing for selfies with fans along the way.

After the race, Warholm told reporters: “I knew that I had a fast time in my body - it feels like it has been there for a long time but you never know when it is right to do it. And it is one thing to know you have it in you and another to go out and do it.

"This is my first 400m hurdles of the season so I really think there is more in the tank. It might take another world record to win the Olympics. There are such a lot of great guys out there at the moment who will all be aiming to do it and win gold. I am happy that there is such great competition. But I now have the world record and I am so happy!"

It is conceivable the world record could even fall again before the Olympic Games as Warholm will go head-to-head with Rai Benjamin from the United States in the Monaco Diamond League on 9 July for the first time in nearly two years.

Benjamin briefly went ahead of Warholm on the world all-time list at the US Olympic Trials in Eugene with 46.82, only 0.04 shy of Young's previous world record and 0.12 adrift of Warholm's world record set this evening in Oslo.

European indoor champion Femke Bol extended her win streak to nine races in the 400m hurdles with victory in 53.33. This was her eleventh Dutch record of the season and she also took eleventh hundredths off her European U23 record in the process.

"I am really pleased to take another national record but I do think I can go faster. It would be good to be able to have someone to chase so i can get closer to that sub 52 mark," said Bol.

Bol dominated proceedings from the gun and won by almost one second from the Ukrainian duo of Anna Ryzhkova (54.15) and Viktoriya Tkachuk (54.62).

There was another significant record set in the women's 5000m as European silver medallist Eilish McColgan surpassed the legendary British record held by Paula Radcliffe.

"I couldn’t be happier with that British record. The last kilometre was fast out there but it brought out the competitiveness in me. It really has been a long time coming. My race times haven’t reflected my training which has been going really well," she said.

McColgan becomes only the seventh European athlete to break the 14:30-barrier for the distance.

Sweden's world record-holder Armand Duplantis scaled the six metre-barrier in the pole vault again with a first-time clearance and meeting record at 6.01m before three attempts at a world record of 6.19m, a height Duplantis believes he will vault before the close of the season.

"I felt really good out there. We could really feel the energy in the stadium out there. Sometimes you just have that feeling and tonight I knew I could get 6.00m but, of course, it is never easy. I really think I can get that record soon. It will come this season," he said.