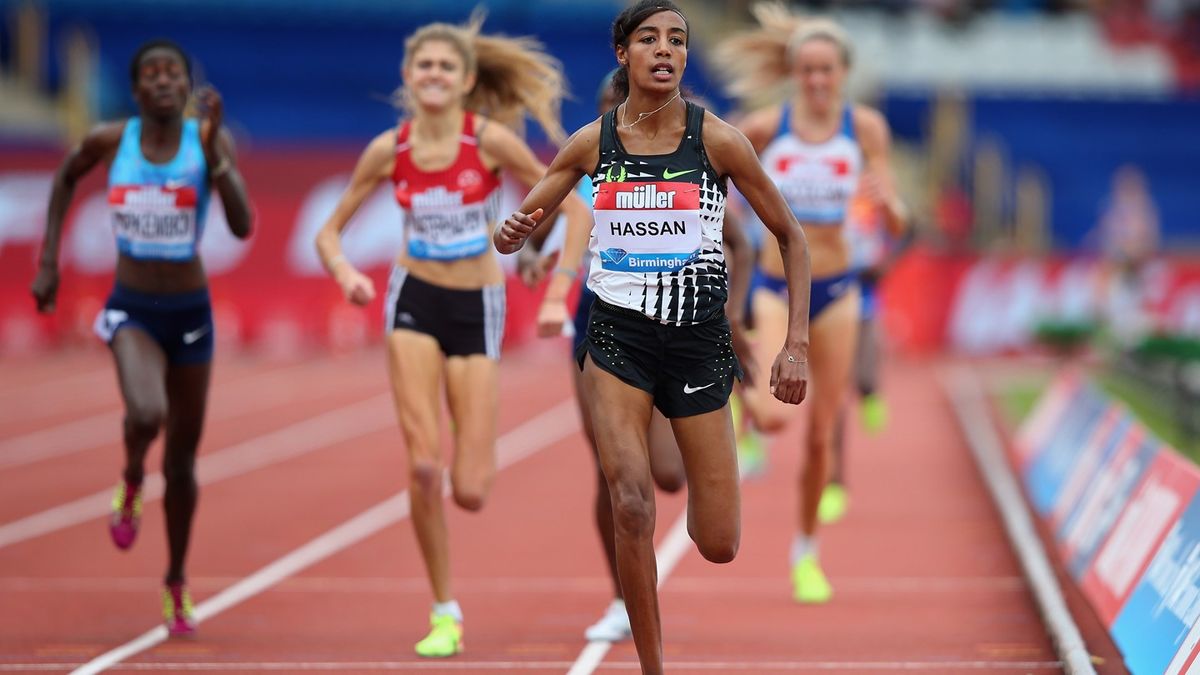 3000m record glory for Hassan and Klosterhalfen in Birmingham

There was sun and then clouds but the stars came out in style in Birmingham at the last IAAF Diamond League meeting before the two finals and it was a fantastic afternoon for European athletes.

What a race it was for Europe in the 3000m and it is not often that the athlete who finishes second has a bigger smile than a winner who has just broken a meeting record and a national record.

But that was the case here at the Alexander Stadium.

Sifan Hassan, the IAAF World Championships London 2017 5000m bronze medallist, remains one of the most consistent distance runners in the sport and the Dutchwomen produced another outstanding performance.

But it was Germany's Konstanze Klosterhalfen who seemed to have the largest of grins.

As she crossed the line in 8:29.89 for second, the two-time European junior cross country champion brought to an end the 17-year national record of Irina Mikitenko, which had stood at 8:30.39.

But for Klosterhalfen, 20, in her first year as a senior, there was more because back in fourth was Kenya's 5000m world championships gold medallist Hellen Obiri.

'I beat the world champion,' commented Klosterhalfen, who just could not stop smiling. 'I cannot believe it. I am so happy. It has been such a memorable year for me.'

Hassan was delighted too: 'It has been three years since I last ran a 3000m, so I enjoyed the opportunity. The fact it is a national record and a meeting record is a bonus.'

Stefanidi did not enter the event until the bar had reached the fourth height, 4.61m, by which stage everyone else had vaulted and three of her rivals were on their way out.

Her dominance saw her clear that height first time before a failure at 4.68m, but at her second attempt she was the only woman to go clear. It was not enough to celebrate victory just yet as Sweden's Michael Meijer had opted to pass 4.68m for 4.75m, as she looked to break the national record mark of 4.71m she had set last month.

Stefanidi now has nine wins from nine competitions this summer: 'It was a little rough out there with a very changeable wind. I am happy and we now go to Zurich and I remain undefeated.

'I am really strong just now and even today when I didn't jump that high, it still showed against the rest of the girls, although that is not to say that at any time someone can't come out and jump really high.'

After two rounds of the women's discus, there was a rarity in the results: Croatia's world champion Sandra Perkovic was down in fifth.

It did, of course, not last long as round three saw normality return to the event where Perkovic is such a star.

The four-time European champion, who had thrown a relatively modest 61.78m and 62.49m in a competition which was being led by Cuba's 2015 world champion Denia Caballero at 65.24m, then reminded the field of her overall power by reaching 67.22m.

Perkovic then had two fouls with Caballero having four fouls in a row but the Croatian saved the best for last, with a final round of 67.51m just to rubber stamp her success.

'I am very happy to perform like that straight after a world championship,' said Perkovic. 'The conditions were tricky, it was windy and cold. I didn't feel like I could really produce a maximum performance, it was pretty exhausting.'

Sir Mo Farah brought the house down in the rain in Birmingham as he won his final track race on British soil with 3000m glory in 7:38.64.

His last track race will be the 5000m in Zurich on Thursday and he ended by handing over his British vest to teammate Andrew Butchart, the passing of the domestic crown.

Farah also hinted he might not run championships when he competes in the marathon and said: 'All I ever wanted to do as an athlete was run for Great Britain. It has been amazing and now it is finally done, I won't be competing for Great Britain in major championships. I won't be taking part, it feels a bit sad and I will feel it more when I am watching on TV.'

While it does not make up for the IAAF World Championships, where she was the defending champion but finished fourth, Zuzana Hejnova had reason to be more than happy after a fine win in the 400m hurdles in a season’s best of 54.18.

'I didn't feel good after the disappointment of the world championships,' said Hejnova. 'My mind was a little down but I finished fourth so I had enough motivation to get me through to the end of the season and focus on getting to the Diamond League final.”

Turkey's Ramil Guliyev once more demonstrated why he is the new 200m world champion by following up his London victory with another fine win.

Guliyev's triumph at the world championships came by staying strong in the final 30 metres and he repeated that to win in 20.17.

'It has also been very busy since I arrived in Birmingham. Now I am a world champion, more people want things with me which is great for me but very different,' reflected Guliyev. 'But I managed to produce another good display and I am pleased to follow up my world title with a victory.'