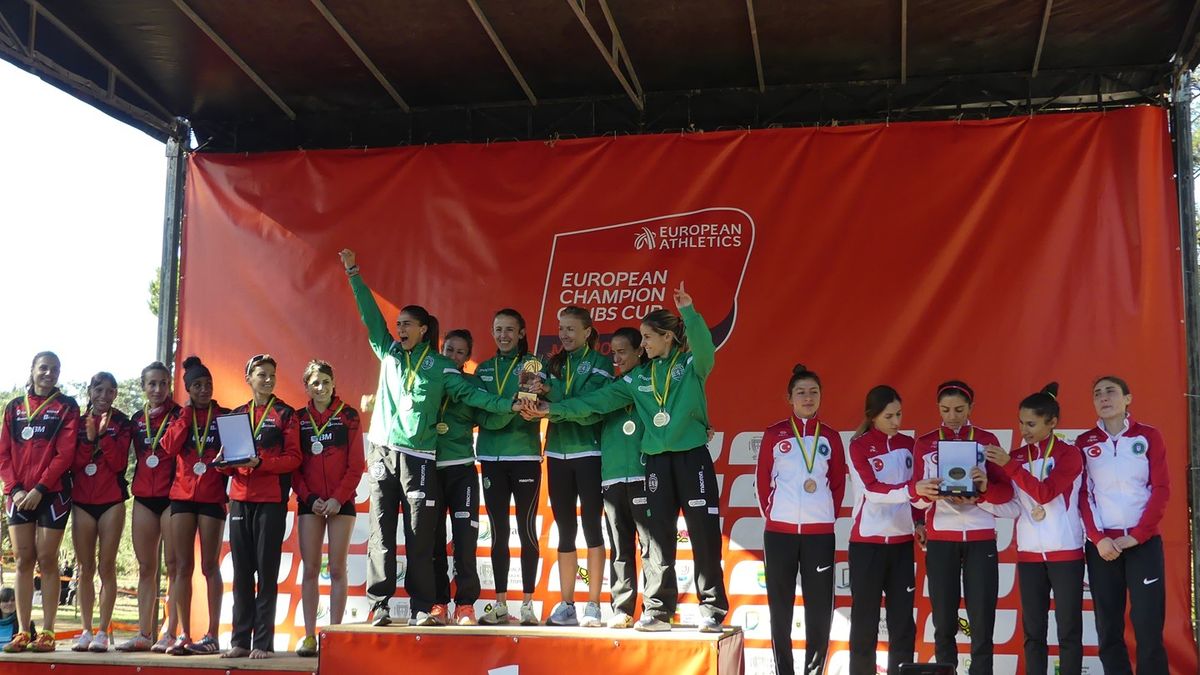 Sporting Clube de Portugal had a day to remember at home in Mira, Portugal on Sunday (4) at the European Champions Clubs Cup Cross Country as they won three gold medals, including the overall title in the senior women’s race.

On a benign and sunny day, the course could not have been more picturesque, set in the middle of woods, with a route taking the runners across hard-on-the-foot terrain.

But the course still provided a tough test. There were some logs placed across the course to break up the rhythm and a series of twists and turns towards the finish to ensure the athletes could not lose a second of concentration.

Sporting Clube de Portugal’s first gold medal came in the women’s senior race which produced the shock of the programme as Poland’s Katarzyna Rutkowska - who was only 31st at the SPAR European Cross Country Championships in Samorin - took the individual honours for KS Podlasie Bialystok ahead of some very experienced and established opponents.

Rutkowska came through on the final lap of the 6.25km race to win in 20:07, one second clear of Portugal’s Jessica Augusto. She was followed home by Romania’s Ancuta Bobocel (20:10) and Spain’s long-time leader Trihas Gebre (20:15) who were both wearing the colours of Bilbao Atletismo Santutxo.

They took gold with 22 points from Bilbao Atletismo with 31 points. Turkey’s Bursa Buyuksehir Belediye SK finished third with 55 points with Esma Aydemir their leading runner in sixth in 20:20.

The senior men’s 10.335km was a decidedly more clear-cut contest with Kenya’s Davis Kiplangat, donning the vest of Sporting Clube de Portugal, coming home a clear winner to the delight of the home fans cheering him along the course.

Kiplangat was untroubled, winning in 29:44 by around 100 metres from Belgium’s Isaac Kimeli (Olympic Essenbeek Halle) in 30:02 with Turkey’s Ramazan Ozdemir - who led Istanbul BBSK to the team title last year - third in 30:14.

Sporting, who were backed up by Rui Pedro Silva in sixth in 30:30 and Rui Teixeira in seventh (30:32), duly won the team crown with 25 points from Olympic Essenbeek Halle with 40 and then Spanish club Atletismo Bikila third with 74.

Denmark's Anna Mark Helwigh gave Sparta AM a brilliant start as she successfully defended her individual women's U20 title over 4.195km in the first event of the programme as Turkish-based club Fenerbahce won team gold.

No wonder Helwigh stood tall and proud on the podium as she received her medal. She had once more demonstrated what a great performer she is on this type of terrain.

With 200 metres remaining, only Fenerbahce’s Emine Akbingol remained in contention but the rising Danish prospect was never going to be beaten, moving to the front with ease as the finish line came into view, winning in 14:11 by one second from Akbingol.

Twelve months after taking team silver behind Bursa Buyuksehir Belediye SK, Fenerbahce were the team champions this time with 36 points by just one point from Sparta AM. Gaziantep Solen Spor Kulubu - led by Inci Kalkan in third - made it two Turkish clubs on the podium with 62 points.

The final route to the finish brought three turns and on each occasion in the men's U20 race, Aaron Las Heras of Playas de Castellon anxiously looked over his right shoulder to see if he had enough of a lead in the 6.265km race.

Not only was he in front by a good margin, behind him was his teammate Mario Garcia. It would be two gold medals for Las Peras and a successful defence of the team title for Castellon. Las Heras, 17, broke the tape in 18:40, two seconds ahead of Garcia - the runner-up individually for the second year in a row - with Turkey’s Omer Amactan third in 18:47 for Fenerbahce Sport Club.

Castellon won with 30 points from Portuguese-based club Benfica with 36, points and Fenerbahce Sport Club with 43 points.