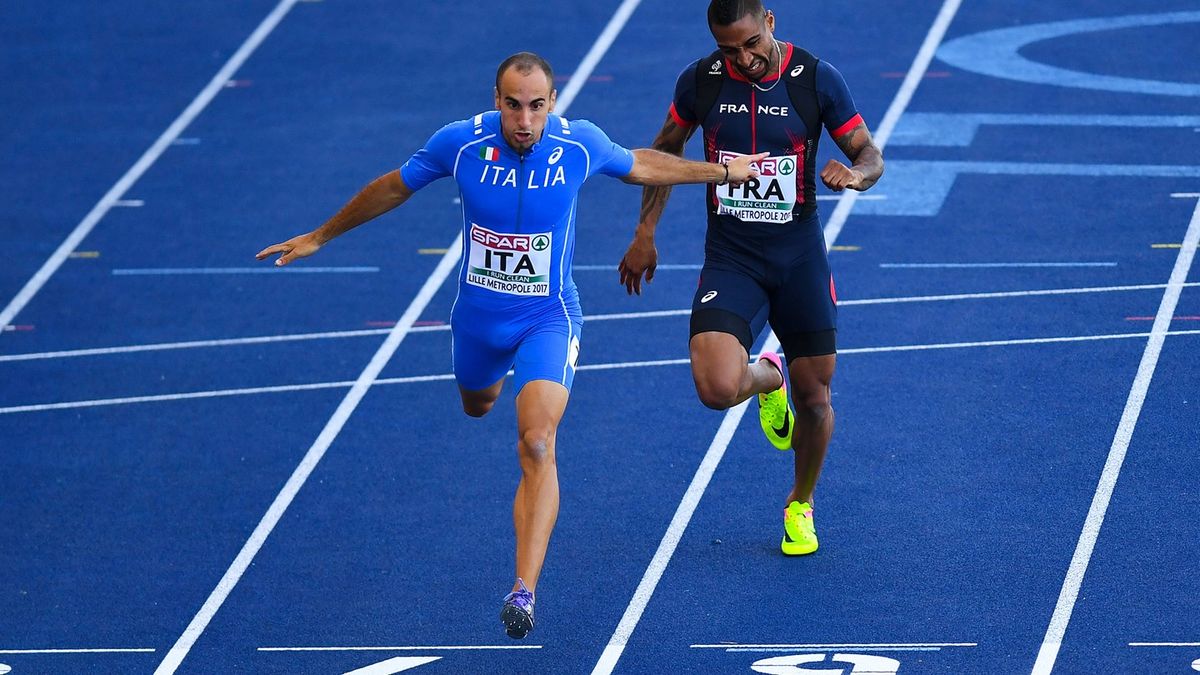 On an afternoon in Geneva where the meeting had to be cut short because of freak violent weather, Davide Re stormed into the record books with a sensational run to smash the Italian 400m record on Saturday (15).

Once more the International AtletiCAGeneve, a European Athletics Classic Permit Meeting, proved quite the occasion for sprinters as Re won the 400m at the 32rd staging of the event in 45.01, breaking the mark of 45.12 set by Matteo Galvan in 2016.

Re, 25, led the European list with 45.51 from Rieti last month but the Mediterranean Games champion now has the 45.30 standard for the IAAF World Championships in Doha as he moved from fourth on the Italian all-time list right to the very top.

Re won by a clear margin from Dutchman Liemarvin Bonevacia, second in 45.71 with France’s Mame-Ibra Anne third in 45.81.

“Today it was actually the first time I hadn't thought about [the record] for a year now. And when I least expected it, it happened. At the finish line I felt so amazed, I didn't believe it,” Re told FIDAL.

“The first two outings in the 400m hadn’t gone as well as expected, after the good feelings at the IAAF World Relays in Yokohama where I had been clocked in 45.3 by the blocks in the mixed relay. I was hoping to do the minimum for the World Championships already in Rieti but I didn't succeed and then in Hengelo I was too cautious at the start.”

The women’s 400m also proved a quick race as France’s Deborah Sananes rose to the third on this year’s European list with victory in 51.55 from Great Britain's Amy Allcock (52.21) and Emily Diamond (52.27).

And in the second race of the series, there was a landmark moment for Ireland's Davicia Patterson whose victory in 52.57 was an Irish U20 record as she beat Great Britain’s Amber Anning (52.64) and Phillipa Lowe (52.83).

Coming just a few weeks before the Boras 2019 European Athletics U20 Championships, Patterson is reaching her peak when it really matters and currently has the fastest time among European U20s to her credit.

There was home success in the women’s 100m as Ajla Del Ponte beat the Netherlands’ Marije van Hunenstijn - 11.20 to 11.24 - but the Dutch did triumph in the men’s race as Taymir Burnet won in 10.28 from Brits Andrew Robertson – who was credited with the same time – and Harry Aikines-Aryeetey in 10.31.

But their current European champion at the distance Lea Sprunger had to settle for third in the women’s 400m hurdles in 56.56 as the Netherlands’ Femke Bol won in 55.94 from Great Britain’s European bronze medallist Meghan Beesley in 56.00.

Switzerland’s Jason Joseph won his heat of the 110m hurdles in a wind-assisted 13.38 (2.6) but the final could not be run because of the bad weather as France's Solenn Compper took the 100m hurdles in 13.11.

It was a good day throughout for the Netherlands as they also won both sprint relays.

A week before Boras, the European Athletics U23 Championships takes place in Gavle and Great Britain’s Charlie Myers has propelled himself into medal contention.

Myers equalled the British U23 record by winning in 5.71m from France’s Axel Chapelle (5.60m).

National records for Czakova and Ledecka in Samorin
There is nothing more than a home crowd can ask for than a national record and Slovakia’s Maria Czakova did just that at the 54th PTS Meeting in Samorin, a European Athletics Classic Permit Meeting, on Saturday night by smashing a mark that had stood for more than 26 years.

Czakova broke the Slovakian 3000m race walk record with her performance of 12:30.32, replacing the long-standing mark of 12:34.31 held by Zuzana Zemkova since February 1993. It was also a world lead and a meeting record.

In the men’s race Poland’s Dawid Tomala also set a world lead of 11:00.36 for victory. Their reigning Olympic champion Matej Toth wasn’t in action last night, preferring to focus on his preparations for the IAAF World Championships in Doha.

Czakova’s performance was the second Slovakia record of the night. In the 400m hurdles which was won by US athlete Kiah Seymour in 55.92, Slovakia’s Daniela Ledecka wrote her name into history in sixth in 56.79.

In a year where so much is happening so later, Greece’s Maria Belibasaki will know there is no rush to peak. On her comeback from an Achilles injury, the European 400m silver medallist ran her best time of the year with 51.96 ahead of Canada’s Madeline Price (52.32) and there will be quicker displays to come.

A dramatic 100m hurdles could not have been closer – and in the end it did not involve the European champion and favourite Elvira Herman.

The Belarusian stumbled when leading and finished fifth with Ukraine’s Hanna Plotitsyna given the nod by 0.002 from US athlete Kendell Williams as they both ran 13.15.

Poland’s Czyprian Mryglod won the men’s javelin with a best throw of 82.31m while Slovakia’s European leader Gabriela Gajanova, 19, ran the second best 800m of her career in 2:01.88 as she finished second to Ethiopia’s Freweyni Hailu (2:00.95).

Gajanova tops the European list with 2:00.58 from Prague earlier this week